Bucs HC Bowles Not Ruling Out Reunion With Mathieu Bucs HC Bowles Not Ruling Out Reunion With Mathieu

After losing safety Jordan Whitehead in free agency, the Bucs brought in Logan Ryan after he was cut by the Giants. Ryan played mostly free safety in New York, but does have some versatility after starting his career at cornerback. However, he’s not an exact replacement for Whitehead’s role at the safety position. Speaking on the Ronnie and TKras show on WDAE, new Bucs head coach Todd Bowles said he wasn’t brought in to replace Whitehead.

“Just off the tape, he does show the versatility of being a nickel and a safety,” Bowles said. “I think him and Jordan are completely different players. I don’t compare the two. Ryan brings a lot of intelligence to us and a lot of experience to us. I would like to see him in practice and move around and see how exactly I could use him and would use him. But I know he’s not the same type of player as Jordan. He’s not even brought in to replace Jordan, sort of speak. So he still has to come in and move around and let me see where he can fit in and work those kinks out. And I think we’ll work them out as we get into the spring and the summer. But I know he’s a sharp player and a very sharp guy.”

Currently the Bucs do not have a true strong safety on the roster. With Bowles stating Ryan was not brought in to replace Whitehead, there are still some questions at that position. The team could look to utilize Antoine Winfield Jr. in that role. But, as an ascending free safety in the league, it might be unwise to weaken yourself at that position to fill another hole. While Ryan could figure into that mix, it is not his strong suit. Additionally, with his versatility he could push cornerback Sean Murphy-Bunting for playing time in the slot. 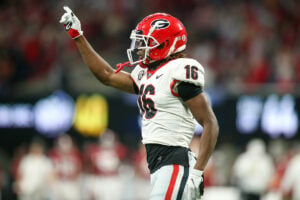 For the Bucs it’s seemingly becoming more likely they look to the draft to fill their hole at strong safety. That’s a position GM Jason Licht has drafted brilliantly. Luckily, there are some solid prospects at the position this year that could be available in the first few rounds.

Georgia’s Lewis Cine is a popular pick in the first round, and was featured in our latest mock. Other options, if the Bucs trade back into the second round, could be Penn State’s Jaquan Brisker or Baylor’s Jalen Pitre. In later rounds the Bucs could target Iowa’s Dane Belton, Auburn’s Smoke Monday, FAMU’s Markquese Bell and USC’s Isaiah Pola-Mao.

Bowles also didn’t rule out a reunion with safety and future son-in-law Tyrann Mathieu. Arians drafted the versatile safety when he was the head coach of the Arizona Cardinals, where Bowles served as defensive coordinator.

“Everybody’s under consideration,” Bowles said. “He’s a heck of a player and he’s been a heck of player. We actually drafted him in Arizona, so his track record speaks for itself. If the situation is right, everybody’s a viable player in this game.”

You can listen to the whole interview with Bowles here.

we could not afford Whitehead so how ya going to get Mathieu ?!?!?

Very good point. I was sad to see them not sign Whitehead and your right I can’t see Honey Badger being cheaper?

Unless he gives the Father-In-Law discount.

Wasn’t that we “couldn’t afford” Whitehead. We absolutely could have. Pretty easily. But reports were that we didn’t even reach out to him or his team to make him an offer. It’s crystal clear that, for whatever reason, we either just didn’t highly value JW, or we were confident that we’d have no problem replacing him and/or his production. Right or wrong, we were clearly just never in on him as a free agent. We were happy to let him walk. We currently have $7M+ in cap space. And we have easy routes to create more – we can do… Read more »

I won’t argue money part if they could or didn’t want to sign him, but they thought he was too much obviously. Two things. We are all in this year again since this is very likely last year of Brady. So stupid to me to now have to draft one and may or may not be as good as Whitehead. Mostly likely first year will not. Second point did you see how the defense struggled when he was out this year and how much better they played run when he came back?

He is just another bandaid for this year and costly too. Where’s the young blood?

That’s why they said the Draft is probably where they will go. Honestly though, the only position we need to get younger at is Dline, our Secondary is nothing but young and could use some Veteran leadership.

You tell me – where is it? By which I mean, feel free to identify young studs currently sitting out there on the free agent market for us to sign. If we’re going to add notable young talent at this point, it’s going to be through the draft alone. What’s left for us in free agency are guys who are looking for their 3rd or later contracts. And for what it’s worth, in that area, Mathieu is relatively young, still just 29. No doubt he’d be a short term answer, though. If we sign him, which I’d be fine with,… Read more »

Horse: There was “young blood” in the secondary with the likes of Delaney and Desir, but thus far, neither has been re-signed. Perhaps that “bandaid” needed to be ripped off and discarded. If you look at the current roster, you’ll get a hint that we will need to draft at least one, and perhaps even two, cornerbacks and/or safeties. Many think we need an infusion of youth on the defensive line, but there are three guys developing that hopefully one will emerge. Picking at the # 27 spot, there is no guarantee that a DT chosen there would be able… Read more »

Dee Delaney is 27 and Pierre Desir is 31. Neither are young lol

Last edited 3 months ago by eaustinyoung

If winning another Superbowl means continuing on with “old blood” a bit longer – I am all in. Because of Brady, we are in “win now” mode now. Tyrann Mathieu is a human wrecking ball and instantly makes us much better back there.

Plus… it’s only money

Last edited 3 months ago by CrackerBall

I’m hoping Ryan can push out SMB at Nickel, or that Edwards will do it permanently.

Mathieu over Whitehead all day. Adding him, with Logan Ryan, and our secondary just got a huge I.Q. boost. Tired of watching young dumbass players blow coverages. Those two vets are leaders. I’ve seen enough of who’s got Kupp? Sign him.

Hey folks, when I said where’s the young blood, this was about losing some of our younger players who were free agents. We have low round 1,2,3 picks in the draft; how do we get younger and better? I’m not gloom and doom, but concerned approaching cap space hell in 2023 and getting worse in 2024,2025. I’m seeing improvement on Defense yet.. Injuries are a concern with many of our starters and back ups, .This Season is not in jeopardy; it’s after 2022 I’m concerned about. We all knew this was coming.

You’re speculating on the salary cap being in Hell. Just think of it like the federal government when they increase the debt ceiling.