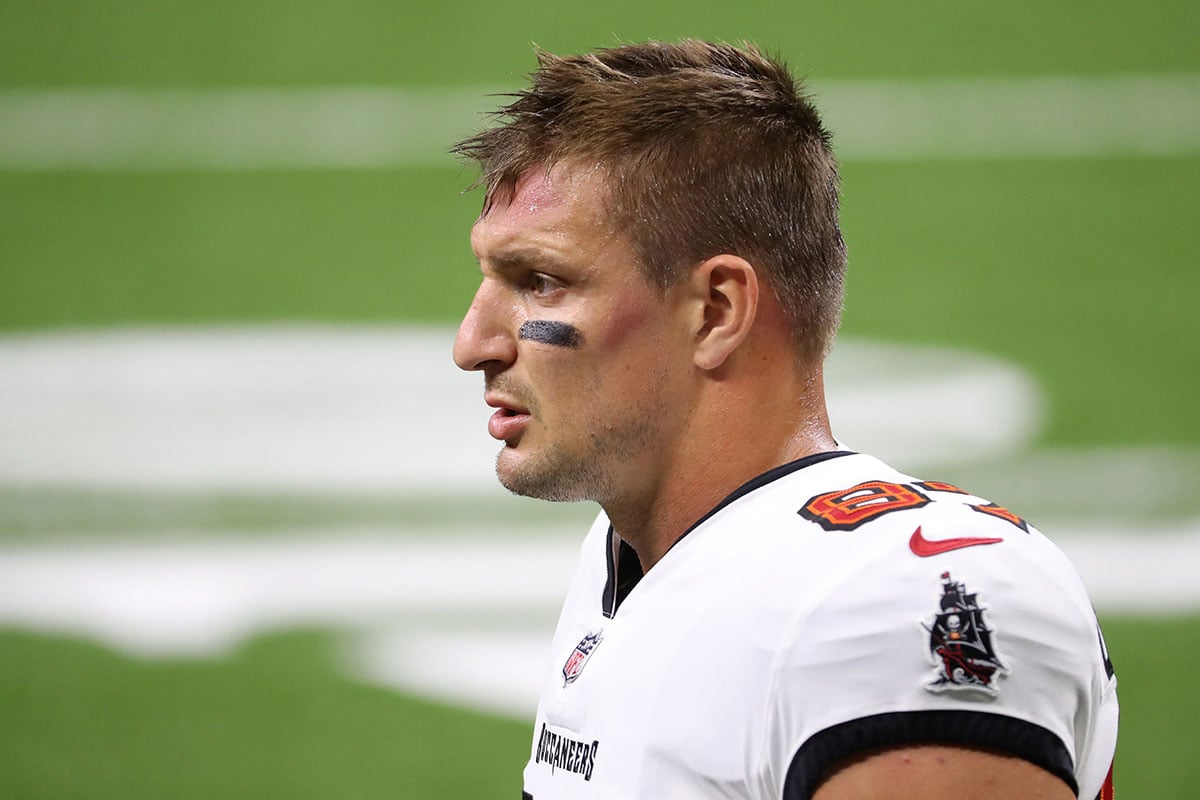 Bucs tight end Rob Gronkowski has been ruled out for Sunday night’s game between Tampa Bay and New England. The future Hall of Famer fractured his ribs during last Sunday’s 34-24 loss at Los Angeles and will be evaluated week-to-week for a rib injury.

Gronkowski was given an X-ray at the stadium last Sunday after the game and head coach Bruce Arians seemed optimistic at the time: “X-rays came out negative. So, he’s fine.”

But another round of tests, this time an MRI, picked up hairline fractures on multiple ribs. Gronkowski showed up to practice on Friday after missing Wednesday and Thursday, but did not participate.

“He was out there,” Arians said on Friday. “We have great doctors, great trainers and everybody knows what it takes to get somebody ready. A lot of it’s just personal toughness, and some guys are a lot tougher than other guys. It’s nothing bad against them, it’s just some guys are just really tough.” Gronkowski, who did not travel with the team to Foxborough,  is one of those really tough guys. But he just isn’t ready to go as the soreness really set in during the week. Because the hairline nature of the fractures, the team did not want to put Gronkowski on injured reserve because that would put him out at least three weeks.

The Bucs are hopeful he can heal over the next week or two and possibly return in two weeks to play at Philadelphia on Thursday night, October 14. And the team isn’t ruling him out to play in next week’s game against Miami, either.

The Bucs elevated tight end Codey McElroy from the practice squad. Veteran Cameron Brate is expected to get the start in place of Gronkowski on Sunday night against the Patriots. O.J. Howard will also see increased action in New England due to Gronkowski’s absence.

Arains needs to give it up with that old school toughness. Putting Gronk back into a game that was already lost was a bad move. JPP playing 61 snaps with a bum shoulder wasn’t very bright. Neither player was effective with their injuries, and keeping them in the game was borderline negligent. A fighter will always want to return to the ring, but it’s up to the corner to know when to throw in the towel. Arains jabs at his players for some not being tough enough to play hurt is just plain dumb.

Excellent point. Playing hurt is what prompted Gronk to retire from NE. Tampa is supposed to be player friendly. Arians is trying to be useful in a talented team but his attitude has been detrimental.

We don’t need Gronk. JPP, SMB now. We need them at the end. We have others guys that need to step up until these guys are healthy. Don’t rush them back. Maybe finally hopefully OJ Howard might do something tonight for the first time in his career. I’m hoping for the best but not expecting much.

Cam Brate is going to have a good game tonight.