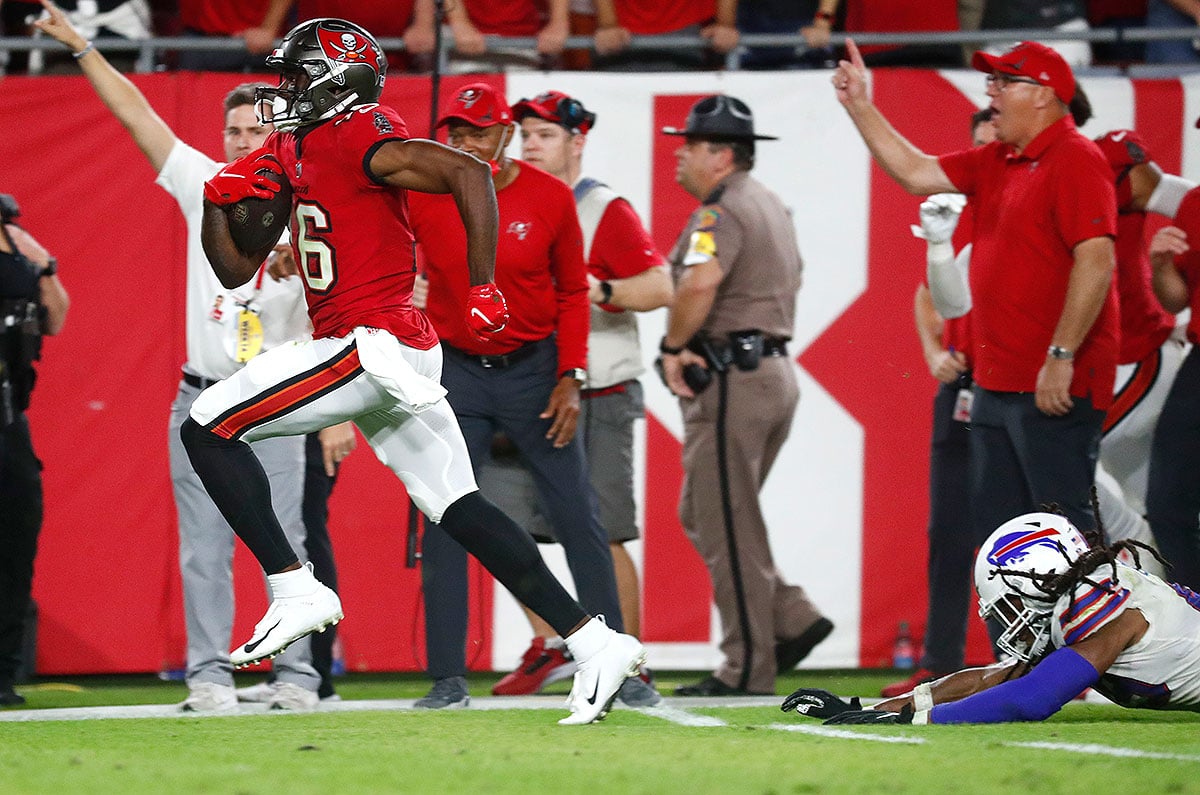 For four quarters, it looked like it would be a game to forget for Bucs wide receiver Breshad Perriman. Promoted to the full time roster after being signed off waivers a month ago, Perriman had moved his way up the depth chart despite a lack of production. But for the second straight week, Perriman was doing little to honor that ascension. Heading into overtime, the veteran receiver had zero catches on just one target. After one catch for five yards and a drop on 59 snaps last week, things were looking bleak.

But Perriman delivered, catching a drag route from Tom Brady and racing 58 yards to the end zone in overtime. It was a relatively simple play that showcased Byron Leftwich’s prowess as a play-caller more than anything else. But Perriman’s speed was on display as he outran Tremaine Edmunds to the end zone.

“It was a great, great play [with a] really good throw,” head coach Bruce Arians said after the game. “Tom stretched him out in front. Obviously [Perriman] has that great speed and that’s why he’s in the ball game. He’s explosive for us.”

Brady, who rarely goes into detail about plays, was effusive in his praise for Perriman. He explained the concept that got Perriman open on a great call from Bucs offensive coordinator Byron Leftwich.

“We had a crosser called, and they kind of jumped Mike [Evans] going across the field,” Brady said. “They left B.P. [Breshad Perriman] back there. I just picked him up in the corner of my eye and got it to him. He made a great catch-and-run. He’s got great speed. Once I saw him in the open field, I was ‘Go B.P.! Run!’. And he did.” 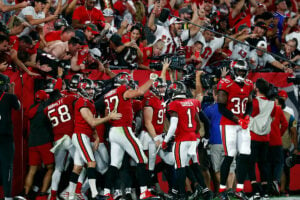 It was just the second overtime touchdown pass of Tom Brady’s illustrious career. Of course, the Bucs never should have been in overtime, considering they led 27-10 with under ten minutes left in the game. But the Tampa Bay offense found a way, rallying from their own 6-yard line in overtime. Perriman’s walk-off touchdown came with 5:42 left in the extra session. Bucs outside linebacker Shaq Barrett explained his reaction from the sideline.

“So I was a little ahead of him when he caught it,” Barrett said. “Once he caught it, I said ‘I know BP (Breshad Perriman) is fast, I know nobody is going to catch him’. He was trying to stiff arm [the defender]. Don’t worry about stiff arming him, just run, just run! And that’s what happened, he ran and scored. Then I ran down on the field to celebrate the touchdown. But it was a great throw, great catch, great play call. Glad we got it done.”

At least Barrett got to see it. Running back Leonard Fournette missed the whole thing, as he and Tristan Wirfs combined to pick up a blitz. Both players and Bills linebacker Matt Milano ended up on the ground.

“To be honest, I didn’t know what happened because they brought a crazy ass blitz,” Fournette said. “So I was on the ground blocking someone. I looked up and B.P. (Breshad Perriman) was gone. That’s all I know.” 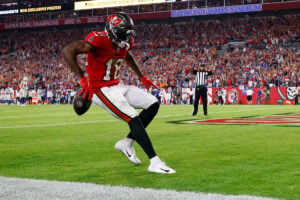 After the game, Perriman explained how he got so open. The Bills essentially blew the coverage on the mesh concept, and Edmunds was trying to save the cornerback’s mistake. Despite Edmunds’ athleticism, Perriman on a linebacker was an advantage Brady had to take.

“It was basically a mesh route,” Perriman said. “It was crazy how it worked. I was supposed to be picking for Mike [Evans], but I went underneath and Mike went over the top and basically picked for me. Tom [Brady] threw an amazing ball and the rest was history.”

When asked what he was thinking after the catch, Perriman’s answer was simple.

“Go,” Perriman said, laughing. “Don’t get caught. No 49 (Edmunds) was running pretty fast and I was like, ‘I need to pick it up and get going.’ Like at first, when I first caught it, that’s what made me put my arm back and stiff arm him. Because I peeked at the Jumbotron and from that point on I just bet on my speed.”

Perriman now has four catches for 82 yards and one touchdown on the season. He also seems to have earned a role in the regular rotation, at least until Antonio Brown returns in Week 16.

Great play! When BP caught that ball, my BP went up! I knew he was gone because he was probably the fastest man on the field on that play. Great win to overcome adversity and pull a win out. The table is set now for a possible repeat of last years finish. I just hope it ends with the same outcome!

Watching that call again on CBS they claim that BP was targeted for the first time against Buffalo in overtime. Not true. He was targeted once before and dropped the ball. That has been his problem and why he could not make it once he left Tampa – he started having problems holding on to the ball. Up to this game he has had some issues as well in Tampa. However, that big catch in overtime may help him take up more plays in the place of Antonio Brown until he returns.

Watch it closely. Both Wirfs and Smith blocked 2 guys to give Brady time. AWESOME

As soon as “Beep Beep” caught the ball I raised my arms to signal TD and looked for a flag. There was no way he was getting caught. What a horror it must have been for Bills fans to have to wait a few seconds for the inevitable result. “Honey, my heart just stopped”, beeeeeeeeeeeeep.