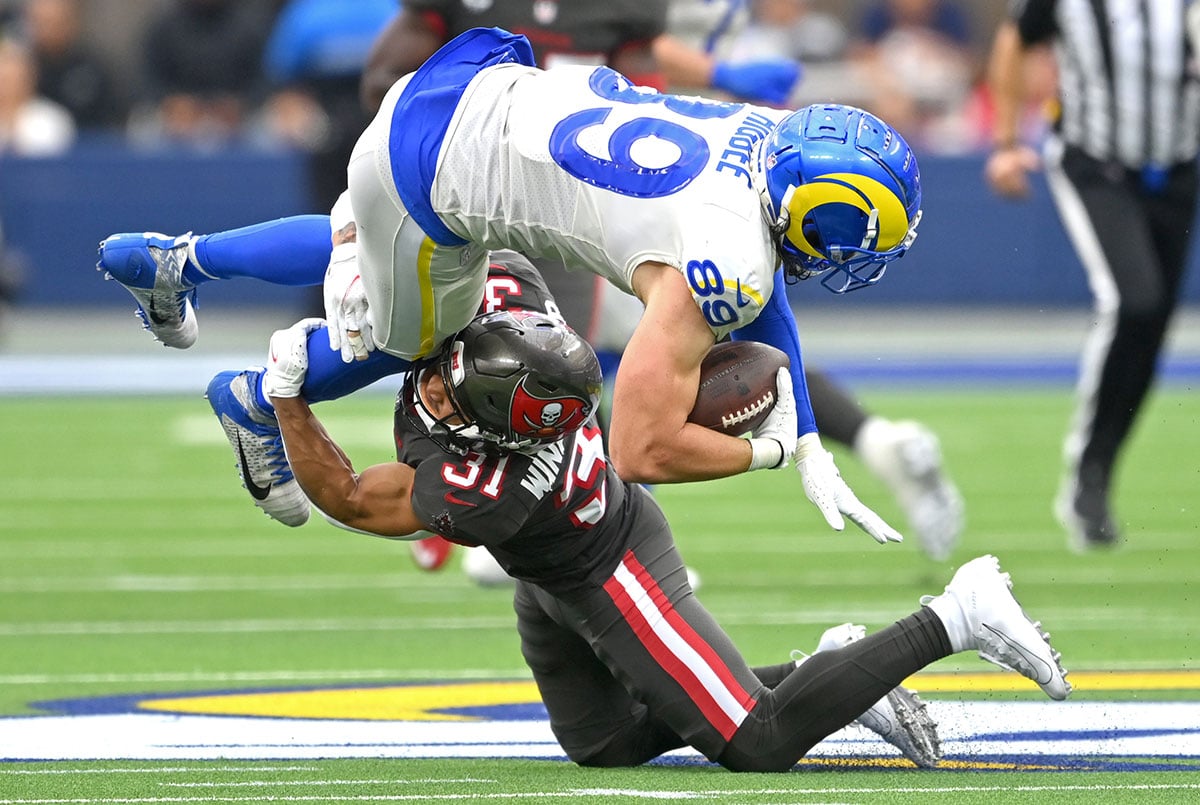 A day after qualifying for the Divisional round of the playoffs by beating the Eagles, 31-15, the Bucs now know their opponent. Following a convincing, 34-11 win over the visiting Arizona Cardinals on Monday night, the Los Angeles Rams will travel to Tampa Bay to play the Bucs next Sunday. The Divisional playoff game will kick off at 3:00 p.m. ET on NBC.

The Rams beat the Bucs in Week 3 back in Los Angeles, 34-24. New Rams quarterback Matthew Stafford out-dueled Tom Brady, throwing four touchdowns and passing for 343 yards in the victory. Brady had 432 yards passing, but only had one passing touchdown in addition to a rushing touchdown.

The Rams defense is led by coordinator Raheem Morris, who was Tampa Bay’s head coach from 2009-11. Morris spent over a decade with the Bucs, winning a Super Bowl ring with the team in 2002. Los Angeles sacked Brady three times and knocked tight end Rob Gronkowski out of the game in Week 3. Tampa Bay ran the ball for just 35 yards on 12 carries (2.7 avg.) in the loss. Brady was actually the leading rusher with 14 yards on three carries. Wide receiver Mike Evans, who has a combined four touchdowns in the last four games, including one in Sunday’s Wild Card playoff win, had eight catches for 108 yards against the Rams in Week 3 to lead the Bucs.

Los Angeles has four Pro Bowlers this year, wide receiver Cooper Kupp, defensive tackle Aaron Donald, cornerback Jalen Ramsey and kicker Matt Gay, who began his career in Tampa Bay in 2019. Kupp led the league in receptions, receiving yards and touchdowns with 145 catches for 1,947 yards and 16 TDs. He had nine catches for 96 yards and two touchdowns in the Week 3 win.

DeSean Jackson, a former Bucs receiver, played for the Rams in Week 3 and had three catches for 120 yards in that game, including a 75-yard touchdown. He was later released and finished his season with the Raiders.

Receiver Robert Woods, who did play in Week 3, tore his ACL and was placed on injured reserve in November. The Rams traded for wide receiver Odell Beckham, Jr., who has filled in with 27 catches for 305 yards (11.3 avg.) and five touchdowns.

Scott Reynolds is in his 27th year of covering the Tampa Bay Buccaneers as the vice president, publisher and senior Bucs beat writer for PewterReport.com. Author of the popular SR's Fab 5 column on Fridays, Reynolds oversees web development and forges marketing partnerships for PewterReport.com in addition to his editorial duties. A graduate of Kansas State University in 1995, Reynolds spent six years giving back to the community as the defensive coordinator/defensive line coach for his sons' Pop Warner team, the South Pasco Predators. Reynolds can be reached at: [email protected]
Subscribe
Login
Please login to comment
23 Comments
Oldest
Newest
Inline Feedbacks
View all comments

The stadium should be rocking on Sunday. I’m worried about the amount of injuries we have sustained and our ability to overcome the loss of talent. It will take a complete game in all three phases of the game in order for the Bucs to win. Need to get FOURnette back! Worried about the injuries to Wirfs and other lineman. Their Defense will put a lot of pressure on Brady. Damn Wirfs injury is just awful! He’s a beast! We will see exactly who is available on Friday. Bucs have Brady. When u have Tom Brady u r in every… Read more »

Gonna be a tough match up. Need Wirfs and Jensen and a running game. Gotta figure out how to slow down Krupp on those underneath routes.

This game is so so Winnable Guys! But we have been beating this same drum forever and it has to deal with our coaches. I’ll share my keys and prediction over the weekend. Cheers

Not to be particularly mean, but who cares what YOUR keys and predictions are?

That was uncalled for.

Why? I listen to Scott, Jon and JC’s predictions with great interest. But we fans? Any of us. Why? That is like asking your neighbor about medical advice.

No easy games from now til whenever the end occurs.

Last week I picked the Bucs to beat the Eagles 31-17. I was pretty close.

I hate to pick Stafford to win anything, but I will pick the Rams to beat the Bucs 34-21 in this one. The Bucs defense isn’t great at stopping the pass and that’s what these guys do best. Not gonna blame injury. Bucs were fully healthy last time and lost.

I guessed 30-20 on Eagles game not that matters. Wow predicting loss in Tampa before even know injury report etc. lol. Now there is a confident Bucs fan lol. I’ll take Bucs in close one in Tampa this time. Stafford has been inconsistent all year the Cards suck. 27-24 Bucs win it and D plays their ass off.

The playoffs are totally different. Healthy or not, I’ll take Brady in January over a QB that won his first playoff game ever last night. And don’t get it confused, the cardinals looked lost and Murray played his worst game of his career looking lost as hell. This Bucs team has been there done that in the playoffs and being at home with the noise will help a bit.

Whatever you pick and five bucks will buy a cup of Starbucks coffee. It’s at home…. Brady is healthy… There is certainly a different attitude and urgency this time. Believe we were suffering from the proverbial Superbowl hangover. And LA was ramped up to beat the defending SB champion. Not saying we will win this game. We are injury riddled. But should be a real dogfight, and hopefully the old Stafford will show up in crunch time.

Maybe it will go that way, but are you a Bucs fan? Enjoy this moment, 14-4, Brady….forget what Might happen.

How soon we forget….Mickens was out, JPP was out and Carlton Davis was out. Best corner out and second best pass rusher out not quite fully healthy.

Not time to make predictions. Its time to get behind our team and help them win. The home crowd will play a factor. if we do execute in all 3 phases we can win. They will not run between the tackles on us. Need to play disciplined football for 60 minutes. Brady has won with a lot less. We can do it!

The Rams won last night mostly because of their run game and their defense, with Stafford only throwing 17 passes (likely the coaches wouldn’t let him throw much because of his turnovers). The Bucs have already shown what they can do to the league’s leading run offense last Sunday, and if Stafford resorts to throwing the ball, we can get the turnovers. Getting an early lead would help a lot as then the Rams will give up on the run and throw it all over the field. The game this Sunday will come down to whether the Rams defense can… Read more »

I like your attitude. I predict a dogfight to the last play. And hope we will prevail. Between Brady and Stafford in crunch time, I like our chances.

Third times a charm! Let’s avenge that greatest show on turf loss and the Bert Emmanuel rule. And also avenge the 79 loss! For the old time Bucs fans, what exactly happened to our offense? The box score is ugly!

I can give you a little insight on that 1979 NFC Championship game. Biggest factor in my opinion was the Rams were inspired by Jack Youngblood playing on a broken leg (non weight-bearing). Bucs offense was unable to do anything that day. Perhaps overconfident by the surprising victory over the Eagles the week before. When it was 6-0, TE Jimmy Giles scored a TD that would have put the Bucs ahead 7-6. Sadly, there was a flag on OG Greg Roberts for twitching before the snap. Not bad for a 4th year expansion team that went 0-26 the first two… Read more »

Again I beg the ?, At what point do all of the lingering injuries catch up to us? The Rams are looking good. Don’t think they will run on us like they did the Cards. But still Staffords arm is impressive. If we don’t have our 2 injjurd O linemen back at at least 85%, we are in big trouble..which we may be even with them. I’m not doom and gloom. Just facing the fact this will be a very tough game for us. And it could go either way. LA’s D line is hittin on all cylinders out there.… Read more »

The “lingering injuries” got us to 14-4, the first divisional championship in 14 seasons, and the no. 2 seed in the playoffs and a home game against the Rams, as well as the no. 2 offense and the no 5 defense in the league.

The week 3 game was just a bad Bucs game to begin with, yet the Bucs started coming back in the 4th quarter and literally ran out of time. With this Bucs team playing at home, it’s whole different story. The week 3 game was also the first game where the Bucs were starting more than one backup at CB, if I remember correctly. Brady will need to get the ball out quickly to make the pass rush non-effective. I also expect the Bucs to establish the run early and often, taking a page out SF’s book on beating the… Read more »

They need all healthy bodies for this one. Complimentary team football. Defense is going to have to play lights out. Limit mistakes and no turnovers. If they can beat the Rams, Packers and AFC champion then they deserve it. Go Bucs!

Last edited 4 months ago by Theydidwhat