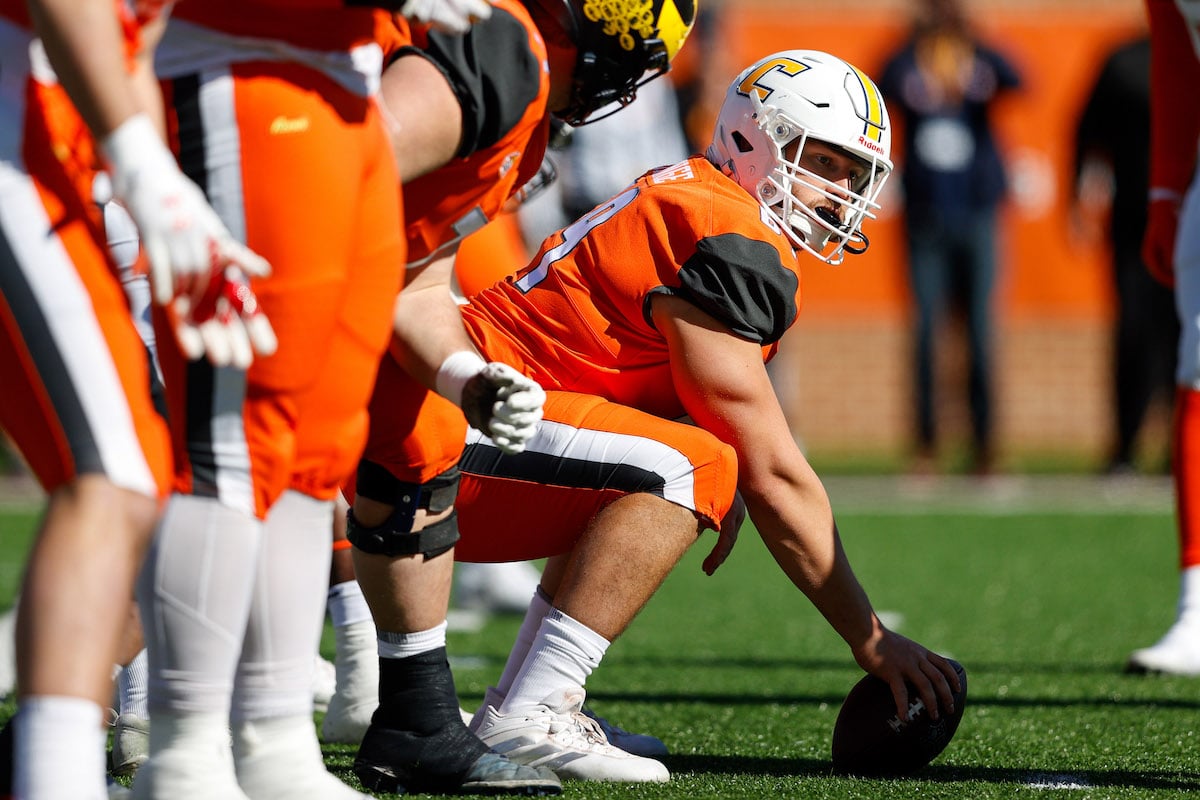 Draft season can only mean one thing for the Bucs front office: time to look at more small school offensive linemen. Sadly, the Bucs trio of non-DI interior offensive linemen broke up this past season. Left guard Ali Marpet retired, and right guard Alex Cappa signed with Cincinnati. Now the Bucs could be looking at another small school replacement.

According to The Draft Network’s Justin Melo, Chattanooga OL Cole Strange is visiting the Bucs soon. After six years in college, Strange is making the leap to the NFL. So far he has crushed the pre-draft process, playing well at the Reese’s Senior Bowl and then blowing up the combine.

Strange has aced the process with excellent showings at @seniorbowl & Combine. He's worked himself into 2nd Rd Convo.

Strange entered the draft process as a likely day three selection. But NFL teams were impressed by him at the Senior Bowl, where he competed despite being light for the position. Then Strange wrecked the Combine. The redshirt senior checked in at 6-5, 307 pounds before blowing away the agility drills and running a 5.03 40-yard dash. Strange’s athletic profile puts him in rare territory per Relative Athletic Scores (RAS).

It shouldn’t surprise any Bucs fans that the team is hosting Strange on a Top 30 visit. GM Jason Licht has a clear affinity for small school offensive linemen, especially ones who play with a chip on their shoulder. Strange’s work ethic and football character are heralded in scouting circles. He will battle his tail off, even against more powerful players.

Now, he will be 24 years old at the start of training camp, and he needs to get stronger. That’s a concern, given that his body is nearing its’ max potential. But, if drafted, Strange could compete for the Bucs left guard job in camp. Right now, Aaron Stinnie and Robert Hainsey are the frontrunners for Marpet’s old spot.

Strange is the first known offensive lineman the Bucs have invited to a Top 30 visit. Will he be the third guard off the board after Zion Johnson and Kenyon Green? We’ll find out in late April.

To me drafting another guard to compete for that spot is stupid. They know Stinnie can play he did great against all playoff teams and in the Super Bowl! Now all the sudden Stinnie isn’t good enough, and 3rd rd Hainsey isn’t enough competition for the spot we need a 3rd? There are so many holes on defense still this would be idiotic imo.

If I was Licht I’d be far more worried about finding depth at OT and back up capable of not totally sucking if Wirfs or Smith can’t go.

I agree, I think they brought in Johnson from the Bengals for competition with Wells. Hopefully it doesn’t end there.

I agree that defense should be the priority. But I also think that you can’t have enough good trench players. It’d be really hard for me to be mad if we add another stud OG. Stinnie may do fine as a starter. But he’s excellent in a depth/reserve roll. That being said, I think we go either DT or CB in the 1st. WR being a long shot. Wouldn’t surprise me to see us end up with two 2nd round picks before it’s all said and done..