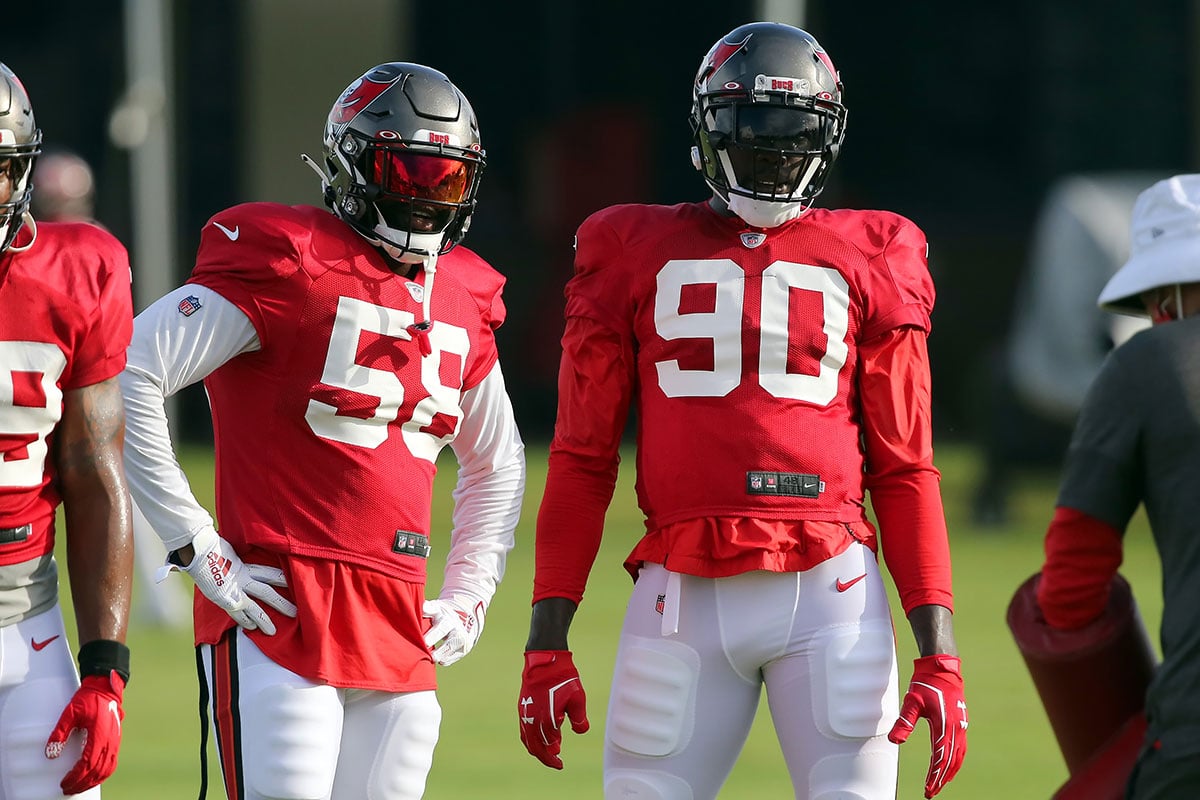 We’ve featured a new position group every day leading up to the start of training camp on Sunday. So far, we’ve covered the offensive side of the ball with battles at wide receiver, running back, offensive line, and interior defensive line. Today we’ll step outside to the edge defender position, where the Bucs are improved from a year ago.

One of the biggest moves of the Bucs offseason was inking Shaq Barrett to a 4-year, $72 million deal. In one move, the Bucs were able to keep together one of the league’s best pass rush duos and maintain continuity on defense. Jason Pierre-Paul enters the final year of his deal after putting up 9.5 sacks last season.

The newest addition to the group comes in the form of first round draft pick Joe Tryon. The rookie opted out of the 2020 college football season, but put up eight sacks in 2019. Entering his third season, Anthony Nelson is trying to keep his grasp on a roster spot as the No. 4 outside linebacker.

The Bucs had one of the NFL’s most formidable pass rushes in 2020, and Pierre-Paul and Barrett were a huge part of that. The NFL’s leader in quarterback pressures, Barrett didn’t come close to his staggering 19.5-sack season in 2019. Still, Barrett tallied up eight sacks, 11 tackles-for-loss, two forced fumbles and a safety on the season. Since 2019, Barrett’s 30.5 sacks are the most in the NFL, per PFF’s statistics.

The team’s lone Pro Bowler, Pierre-Paul underwent minor knee surgery this offseason. In an Instagram post, he described himself as playing at only 70 percent throughout the 2020 season. Even while dealing with a nagging injury, Pierre-Paul was one of the Bucs biggest playmakers. He finished the season with four strip sacks, three fumble recoveries and two interceptions to go along with seven tackles-for-loss.

Both Barrett and Pierre-Paul came up big for the Bucs in the postseason with six sacks, five of which came against Aaron Rodgers. A fully healthy Pierre-Paul bookending Barrett should be a scary proposition for quarterbacks on the schedule this season.

New Kid On The Block

A team can never have too many pass rushers. That thought process led to the Bucs selecting Joe Tryon at the end of the first round in April. Tryon was one of the more explosive pass rushers in the draft, using his size and length to get good leverage. He has all the tools and traits to develop into a dangerous pass rusher, but it may take time. Still, learning under Pierre-Paul, Barrett and this coaching staff should do wonders for his development while he contributes in a rotational role right away.

Battle For The Final Spot

Entering his third year, Anthony Nelson has the inside track to securing the fourth spot. Nelson is one of the top run defenders on the team and has been working on his skills as a pass rusher. In 2020, he notched his first career sack in the regular season against the Lions. Nelson’s first career postseason sack came in the Wild Card game against Washington. As a key contributor on special teams, Nelson played nearly half of the snaps on multiple units.

Nelson isn’t necessarily a lock though, and will face competition in the form of Cam Gill and Quinton Bell. Bell, who made the roster out of camp, has a unique blend of size and speed. A former track star and converted wide receiver, Bell has been working on adding to his pass rush in hopes of contributing more than just on special teams. Entering year three of his career, the time is now for Bell to make some noise.

An undrafted free agent signing in 2020, Cam Gill supplanted Bell on the roster in Week 5. His immediate impact on the Bucs came on special teams, where he saw a majority of his snaps. Playing in 12 games on the season, Gill saw limited snaps on defense and recorded three tackles. Gill also had a half sack on Patrick Mahomes when he was active for Super Bowl LV.

Ladarius Hamilton was claimed off waivers from the Cowboys in May. He’s a long shot to make the team after spending the 2020 season on Dallas’ practice squad. Hamilton could surprise, but at this point looks to be added competition and a camp body. He put up 15 sacks over his final two season at North Texas, where he was teammates with CB Nate Brooks and rookie WR Jaelon Darden.

Barrett and Pierre-Paul barely leave the field, never playing less than 68 percent of the snaps and playing as much as 97 percent in any given game. That ironman mentality will make it difficult for anyone behind them to see playing time, barring injury.

The Bucs hope they finally have a capable backup in Tryon. Nelson is the elder statesmen of the group, but the former fourth round pick’s pass rush ability hasn’t quite developed as hoped. During the 2020 season, Gill flashed almost as often as Nelson on passing downs.

With the No. 4 outside linebacker’s contributions expected to come mainly on special teams, the Bucs could look to go with more pass rush upside. Bell or Gill fit the mold in that case. There is a scenario where the team could choose to keep five outside linebackers on the roster, but only if there are multiple special teams standouts amidst the group.

Assuming the Bucs only keep four outside linebackers on the team, I think Nelson should do enough to hold off Bell and Gill.

On Tuesday, we’ll take a look at the battle at inside linebacker and who slots in behind the best duo in the league.

I think there is a good chance of the Bucs keeping 5 OLBs. They might want to kick JPP inside on passing downs and put Tryon on the Edge. Also Gill was one of the better special teamers and I dont think they are ready to give up on Nelson.

Joe Tryon is the big question mark. If he performs like a first round pick then this defense just got even more ferocious! This is a big year for Anthony Nelson. He has amazing physical talent with his size and all, but will this be the year that he finally puts it all together? I think the Bucs want to see as well. I think he gets another year to prove his worth.

This is always interesting, but I’ll find it even more so this year – at which positions do we elect to keep extra guys above the standard number? We’re virtually guaranteed to carry: 3 QBs, 3 RBs, 6 WRs, 3 TEs, 8 OL, 6 DL, 4 edge defenders, 4 ILB, 10 DBs, 2 kicking specialists, and 1 long-snapper. That’s 50 players for sure. There are legitimate candidates to make this team want to carry an extra player at so many positions – namely OL, edge, WR, RB, TE, CB, and DL. That’s 7 position groups battling for 3 roster spots… Read more »

Yes it’s super difficult to make the team. But I don’t think 10 DBs are locked in. Imo 8 DBs are virtually guaranteed and that number could grow to 9 or 10 by beating out players from other position groups. 4 CBs and 4 Safteys is given, a fifth player at either position is a bonus.
But that still leaves 15 decent players to compete for essentially 5 spots.

It’s for sure possible fewer than 10 DB’s come out of camp, that’s my bad. I should’ve said 9 was given. I can’t remember a time when I’ve seen us or any team head into week one with lower than that number. There’s no way we go with 8 total DB’s. 10 is common, but 9 is virtually guaranteed. So that would make four total potential spots, not three, available. Still a tough battle for all of these guys!