Bucs vs. Steelers Most Impressive 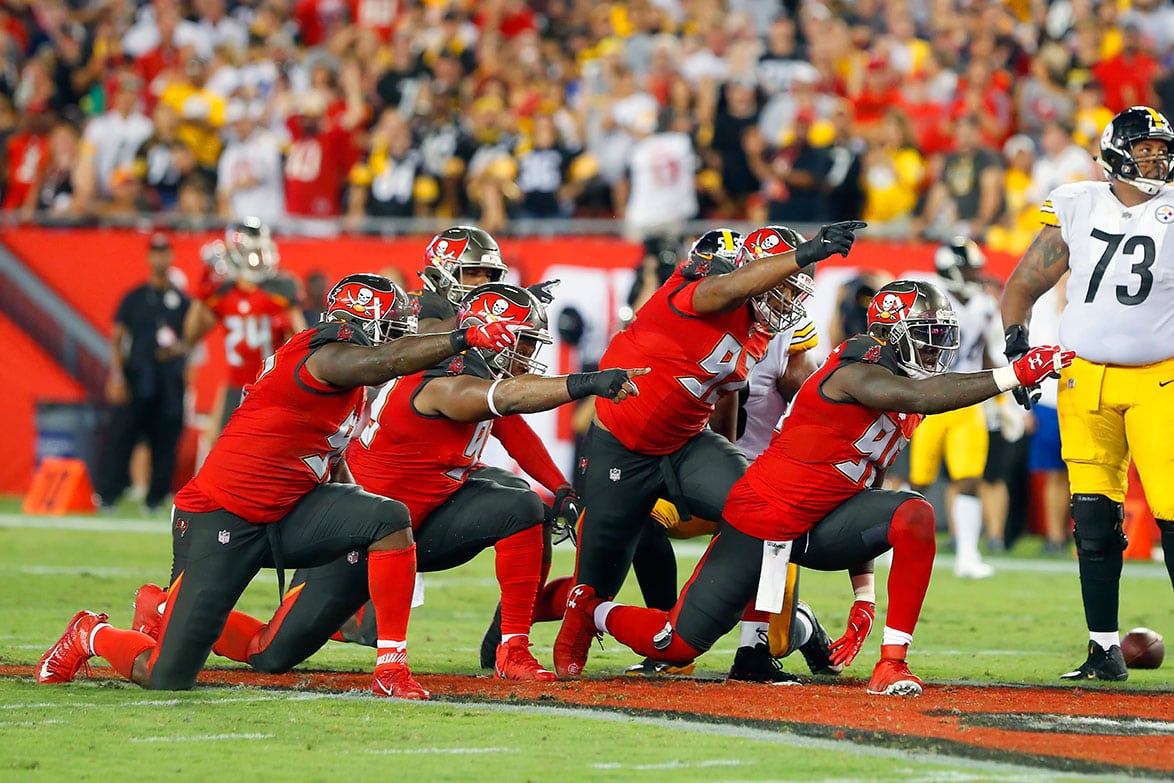 Bucs vs. Steelers Most Impressive

Even though the scoreboard didn’t end the way they wanted, the Buccaneers made their 30-27 loss close, in the end, and that can be credited to the impressive performances from a few individuals.

These were our most impressive Buccaneers from Monday night.

On a field that had Antonio Brown and JuJu Smith-Schuster on the other side, Evans was the best wide receiver on the field. DE Jason Pierre-Paul
JPP had two penalties in this game that certainly didn’t help, but his two sacks were even bigger than his penalties, and they came at crucial times. Pierre-Paul seems to be the only one getting consistent pressure each week, Monday night was no exception.

CB Carlton Davis
Davis was given as tough a task as any that you can ask of a rookie: cover Antonio Brown in man coverage. But, when it was all said and done, Davis not only stood his ground, but dare we say got the better of Brown?

Either way, it was a battle all night, and how many rookies can say they went toe-to-toe with AB and came out still standing?

LB Lavonte David
David led the Buccaneers with nine tackles and three tackles for loss. This is the kind of performance you need from your star weakside linebacker. Unfortunately one of those tackles couldn’t come on a stop of James Conner as the Steelers were bleeding the clock. But we can’t take away a good performance just because of that. David showed up on Monday night.

FS Justin Evans
Evans had another incredible interception in the first quarter of this game, and if the Buccaneers didn’t turn the ball over a million times themselves, that type of play would have been the difference maker on the Tampa Bay side.

Evans is growing into his role as this team’s single high safety each week more and more. He didn’t just have an impressive game, he’s having an impressive year.

Davis played great. Evans played great. MJ Stewart had some great tackles and PD’s also. Whitehead was good in relief of Conte. The young guys in the secondary all played well. I like where that’s headed.

So while I agree that Evans had a great game, I thought he was late getting over on that AB TD. Curious if you saw the same thing.

If someone had told me before the start of the predicted 1-15 season that, after the three -game gauntlet, we would sit at 2-1 after playing the Steelers down to the wire in spite of the turnovers, I’d be at least satisfied with the trifecta. We certainly didn’t embarrass ourselves on national TV.

I’m also impressed with the new Bucs Beat Drumline. It brought back memories of the old Bucs Band.

I am impressed with our Pewter Reporters who stayed up well past Trevor’s bedtime. Even Mark, who at his age, must have been looking for a couch on which to fall asleep.

Not a player, but I thought Monken’s second half adjustments were great. He/we weren’t doing in the first, and he changed the game plan and almost brought us back. Nice to have a coordinator that actually makes half time adjustments.

List looks about right. Disappointing game in every way but some stood out. I find it funny all guys like Bob saying how JPP sucks when he’s only one that applied any pressure on Ben. He also kicked ass last week in a leg brace and played most snaps of any lineman. Guy is just a work horse. Love his motor and effort and production! Catanzaro hit them all yes but all short. I think we punted once forgoing what looked like 54 yard FG? I’m not sure on distance I was at game and guessing on the length. Would… Read more »

Fitz should be on this list along with the disappointing list. 1st half wasn’t good (2 Ints were not his fault, 3rd one was), but the guy threw for over 400 yds again (only player to do that 3 games in a row in NFL history) and 3 TDs almost leading us back to a win after a 20 point deficit going into the 2nd half. I think he’s allowed one bad half after his amazing and historic run. Jameis can ride the pine and learn from him. The hot hand has to stay in the game that Fitzmagic rn!

Second half Fitz was majik again and but for I. Johnson’s stupid hold on DJax’s amazing TD running back a kick Fitz would have come back the 20 point deficit for the first time in Buc’s history and won the game. Second half Fitz should be on this list!

I have to respectfully disagree about Fitz in the most impressive list. That pick 6 backed up cost us game pretty much and was just horrible decision. His accuracy was off. Many balls behind guys or in dirt. Not not all the int.’s were his fault but I don’t care if he throws 400 yards and we lose and two very bad picks were his fault. Playing behind had throw throw throw and Steelers secondary isn’t good. It wasn’t worst QB performance but far from the impressive list.

Agree that you can’t make the impressive list with three interceptions. I’ve seen a lot of Jamies interceptions that weren’t his fault as well, but I just wonder how well Jamies would have stood up to the pressure. Fitz has yet to fumble and that is Jamies’ achilles heel. I’m ok with either quarterback. Just hope this doesn’t become a locker room issue. Monken is great with the passing game. Everyone sees that. But you can’t win consistently with a ratio of 2.5-1 or better passes to runs.

Fredster, I agree fitz shouldn’t have made the most impressive list but I don’t think that pick 6 cost us the game. Godwin killed us and so did the holding call on DJ return. Godwin fumbled the ball away and then dropped a TD he should have had. Any one of those 3 plays goes the other way and we win this game. We shouldn’t have even been in this game with 4 turnovers. Fitz played like crap the first half but amazing the 2nd half. I still think we should roll with Fitz in the Chicago game but keep… Read more »

Let me start with this: Winston is our future unless he screws up again off the field. If you call him a franchise QB; he is in the bottom half of the list. His hype does not match his play. Fitz has earned the right to play Chicago. It would be a poor business decision for the staff to replace Fitz until after the bye.