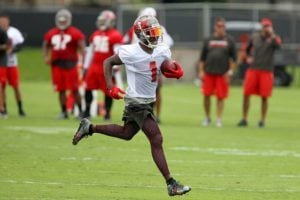 The Bucs quarterback sat down for an interview with NFL Network’s Tiffany Blackmon, set to air on Total Access Tuesday at 7 p.m., and spoke highly of his new weapons DeSean Jackson and O.J. Howard.

“They’re dynamic,” Winston said at his 2nd Annual Dream Forever Football Camp. “We haven’t had a true deep threat guy in Tampa Bay and now we have DeSean. So we’re excited to throw him a couple bombs. O.J., man, he’s just a specimen. We’re privileged to have O.J. Howard.”

Tampa Bay made it a point this offseason to add talent around Winston, who’s entering his third season and coming off a year in which he threw for 4,090 yards and 28 touchdowns with 18 interceptions. After landing Jackson on the first day of free agency, with a three-year, $33.5 million deal, the Bucs doubled down on pass catchers by selecting Alabama tight end Howard with the No. 19 pick in the draft.

Just two months into his NFL career, Howard has impressed. At rookie minicamp in May, head coach Dirk Koetter called him someone who “can do everything we need him to do,” and by three-day minicamp in June Howard had already put his acrobatic ability on display.

Howard finished his senior year with 595 yards and three touchdowns, including 106 yards and one score in the Tide’s National Championship loss to Clemson.

Last season the Bucs top tight end was Cameron Brate, who finished with 57 receptions for 660 yards and eight touchdowns, second on the team to Pro Bowler Mike Evans in all three categories. Tampa Bay expects to use Brate similarly – “I think this will help Cam,” Koetter said after the Bucs selected Howard – and is confident that it now has one of the best duos in the league.

As for receivers, Jackson joins Evans, Adam Humphries and Chris Godwin, who the Bucs drafted out of Penn State in the third round this year. The offense will look to find its stride in the passing game during training camp, with the first practice on July 28, and start the quest of ending a nine-year playoff drought in 2017.

Football fans will get an inside look at that effort when the Bucs are featured on HBO’s five-episode series Hard Knocks, which will run from Aug. 8 to Sept. 5.

Zach is entering his 3rd year covering the Tampa Bay Buccaneers as a writer for PewterReport.com. Since 2014, he's handled a large part of the beat reporting responsibilities at PR, attending all media gatherings and publishing and promoting content daily. Zach is a native of Sarasota, FL, and a graduate of the University of Tampa. He has also covered high school football for the Tampa Tribune and the NFL for Pro Player Insiders. Contact him at: [email protected]
Subscribe
Login
Please login to comment
0 Comments
Inline Feedbacks
View all comments