It took one conversation with Tom Brady for Russell Gage to pick the Bucs. Brady has been dubbed “the ultimate recruiter” by many, including teammates. He can now add Gage to the list of players he helped get to Tampa Bay.

Gage officially signed his three-year contract with the Bucs on Friday. But he initially agreed to terms on Tuesday. The night before, he got a call from Brady to seal the deal. At first, Gage thought the call couldn’t be real. He believed that someone was trying to pull a fast one on him.

“Tom reached out to me Monday night,” Gage said. “Definitely caught me off guard. I just finished talking to my agent, we were talking about a few teams and Tom reached out to me. For a minute, I thought it was a prank, somebody trying to pull one on me. But he just told me about what they have here in Tampa Bay and that he wanted me to be a part of it. He had something really special going on. He honestly didn’t have to say much, he definitely had me hooked on it after that.”

Gage then went into further detail about the exchange between the two.

“I can’t even it explain it,” Gage said. “I was outside taking the trash out, and I had just scene some fake news on social media so my mind was kind of on fake news. So when I got the call it was kind of like I’m in a state of shock. And I’m stuck between – ‘okay this is unreal’, and ‘ok, this is not funny.’ Just trying to navigate my way through that. And then as we got going I kind of realized, ‘okay, this is something serious.’ 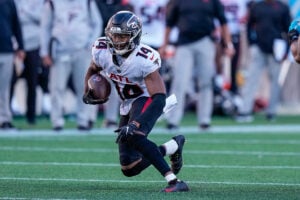 “Like I said, I had conversations with teams and offers and what-not. But this was just completely different, this was like no other. It’s a huge blessing. I was three-years old when Tom Brady entered the NFL. So for me to hear from somebody like that, just seeing the other day that he un-retired and now he’s reaching out to me? It was unreal. It was definitely special.”

Keeping his guard up, Gage admitted that it took about halfway through their conversation to believe it was Brady. It was all in the details, as Brady was discussing information that your typical prankster wouldn’t have access to.

“Probably midway through,” Gage said. “I could kind of tell in the delivery that ‘okay, this is real.’ I’m sure somebody wouldn’t be able to go the extent of (details) he’s going through right now.”

The Bucs have another weapon on offense with Gage. He’ll slot in as the No. 3 wide receiver and is very capable of being the No. 2 if Chris Godwin needs more time to recover from his ACL injury. You can bet Gage won’t be the last player that Brady recruits to the Bucs for the 2022 season.

Outstanding story! You have to love Brady’s commitment to this team.

It does my heart good to know that even multi-millionaire NFL players can’t get out of household chores like taking out the trash.

The real question should be can Licht dig up another unknow FA OLB who can pass rush like Shaq Barrett. The NFL laughed when he signed Barrett but he had the last laugh when Shaq exploded for 19.5 sacks that season. The Bucs need to do something about improving thier pass rush so we don’t have to blitz as much. It’s what cost us another SB championship, not the lack of anything else.

Agreed! We’ve got to dial up the QB pressure without bringing the house.