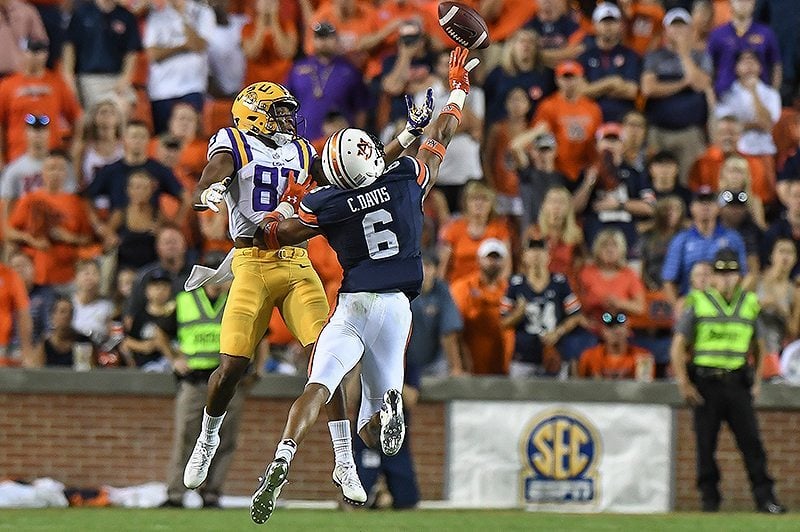 Cornerback Carlton Davis, the team’s third of three second-round picks, is up next, followed by offensive lineman Alex Cappa, who was Tampa Bay’s third-round pick.

Davis is a big, physical and it was great to see Tampa Bay go outside the box to have a bigger presence outside on the perimeter as the Bucs have a slew a sub-6-foot corners on the roster. Davis, who has been compared to Richard Sherman, is an extremely confident cornerback that can match up against the likes of Atlanta’s Julio Jones or New Orleans’ Michael Thomas from a size standpoint. 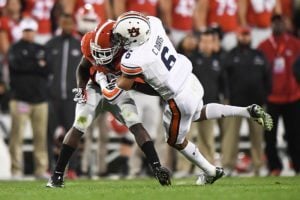 Davis recorded 136 tackles for Auburn as a three-year starter, and had 28 pass breakups and four interceptions, including three as a freshman in 2015, and three forced fumbles. He has incredibly long arms and a unique sense of timing in terms of breaking passes, but does need to work on his ball skills when it comes to interceptions as Davis has only had one over the past two seasons.

Davis can play off coverage, but excels as a press cornerback, disrupting the timing between receivers and quarterbacks. Because he does not have elite speed, Davis must win at the line of scrimmage with physicality to prevent receivers from beating him deep. With 4.53 speed, Davis is fast for a bigger corner, but his lack of sub-4.5 speed was the only thing keeping him out of the first round. Davis is quite talented and battle-tested after playing in the SEC.

Aside from whether he’ll learn to make more interceptions instead of being content with batting the ball away, the real question mark for Davis lands on Smith’s doorstep. Davis is best as a press cornerback, but will defensive coordinator Mike Smith allow him to do what he does best and press, or will he be forced to play within the scheme and play off coverage, which is not his game, too often? Davis has immense talent – it’s all in how it’s used by the coaching staff.

Don’t be surprised if Davis beats out M.J. Stewart, Vernon Hargreaves III and Ryan Smith for the starting cornerback job opposite Brent Grimes as a rookie. Davis has a great deal of swagger and plays with an infectious edge that propelled him to playing time as a freshman at Auburn. The big learning curve for Davis will be making plays on the ball and creating more takeaways rather than just being content with pass breakups.

Davis should have been the second of Tampa Bay’s three second-round picks instead of Stewart, in my opinion. Davis has Pro Bowl-caliber potential and could be a steal in the second round. The training camp battles between Evans and Davis should be epic and it will be fun to watch two physical, competitive players battle for the ball and trash talk each other.

Up Next: OL Alex Cappa

I think the big learning curve is Coach Smith allowing his CB’s to do what they do best.
I agree Davis has a lot of potential, but coach Smith might hold him back.

I would work with the qb and a good receiver (mike evans) and throw passes as davis covers trying to get him to see an interception in the making. That, and film of interception machines. Relentlessly, until he improves. Why defend….and defend again and again, when you can defend, intercept, and go sit down.

Hey, I would LOVE to see us defend, defend, defend, then field a punt. They don’t have to be int’s. Granted, interceptions are better, but defending is also good. Last year, we didn’t even defend. We turned our backs on the WR and let him run where ever he wanted to. Then, we let him catch the ball and tried to tackle him. There was no defending at all. Here’s to defending!!

I agree with makski first we need to defend! Our defense gave up too many uncontested catches. You can’t pick off anything if your not even in the area of the catch until after its made.

Jason has peculiar drafts. I dont get taking MJ before War eagle. I truly believe that MJ would have been there in the 4th round.
Anytime our GM gets a gift pick he trades up for someone who he doesn’t need to go up for, or he drafts someone early.
If he misses these picks its his swan song.

As far as where each player was picked, we can argue that all day long. Fact is, we got both regardless if one was “overdrafted” or not. I’m happy with this draft haul, but like the article say…it’s all going to ultimately fall on Smith. If Smith learned from last year, he will allow Davis and VH3 to play “their game” closer to the line of scrimmage. VH3 did well his rookie year when allowed to play tight man coverage and it seems as though Davis is the same type of player. Use the players’ strengths rather than force them… Read more »

I do not see Koetter firing Mike Smith mid-season unless the Glazer’s give him an ultimatum. Fire Smith, or get fired yourself! I’m liking this draft more and more. I’d be willing to bet they plan on being more aggressive at the LOS this season. Hopeful anyway..

I apologize for being so negative, My wife says I am yelling at the rain, I understand there good people putting a lot of work into this site, My background is management professional boxers, I can not treat football the same attitudes took to boxing, I need understand it is about the community of fans coming together to speak about there love for the team. I saw the post about coming together at bowling for a good cause good people out to good things. I sorry for being such an ass hole. Will tone it down in future, I am… Read more »

We understand sometimes things comes off pretty bad, but as a fellow Bucs fan I respect your passion for the team to win. We just like to start the off season off on a high note. If the season doesn’t work out as planned then so be it, but I always go into the season with high hopes. Plus I don’t want to go through another Head Coach and GM, every new GM blows up the roster

I wasn’t offended! We’re all for the Bucs.
I always say what I want to say to based on my perspective. You have nothing to apologize for. Go Bucs!

I need to understand these are human beings doing the best job they can, we are not privy to the restraints they are operating under, The NFL is a very controlling machine Lynch may not have all the options he would like. I will try to be more positive.

We can absolutely be more aggressive this year!! Smith in a sense did cater to our players strengths but he also had to realise where our teams weaknesses were!! We have ONE of the top front sevens (on paper) so quarterbacks will be forced to throw before they should. I like what we did in the off-season. Re-signed some key players, added some nice acquisitions and hired a motivating stud for a defensive line coach. Jason Licht deserves lots of credit. Bucs haven’t drafted this well in a long time and we are developing talent also!! I am stoked in… Read more »

I don’t know if we have the best defensive front on paper. We definitely have better starters and better rotation players no matter who starts. When you match that up with better dline coaching we should see a massive increase in the production of our line. That will take some heat off the secondary that doesn’t excuse bad play or bad scheming but there’s a big difference between covering for 2-5 seconds and covering for 4-9

Sorry Scott Reynolds – but a grammar check would have spotted something wrong with the sentence:

Davis is a big, physical and it was great to see Tampa Bay go outside the box to have a bigger presence outside on the perimeter as the Bucs have a slew a sub-6-foot corners on the roster

This pick is an A well.

His length and the way he fights for the ball ensures he is going to be a difference maker at the NFL level.