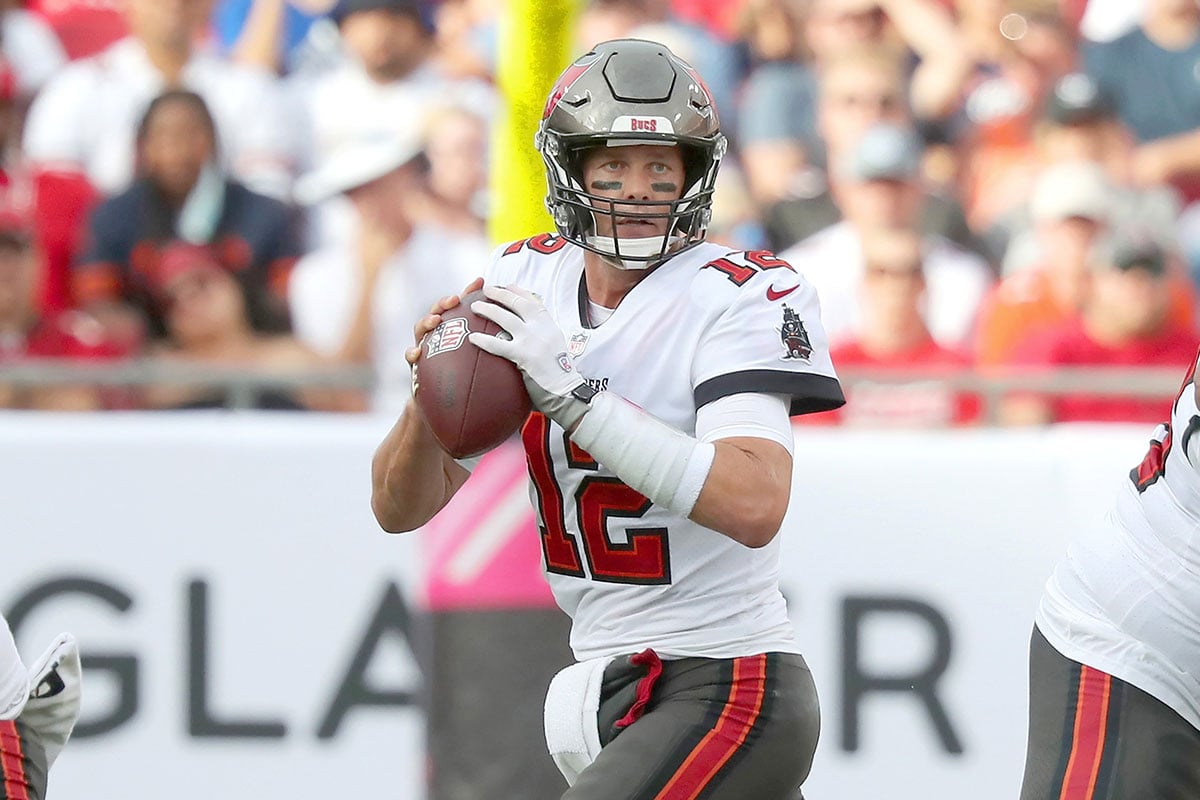 Over the past couple years, few people have been as plugged in to all things Tom Brady as ESPN’s Jeff Darlington. When Brady was set to leave New England two years ago, Darlington was the first to report a pending divorce. Then, a few days before the Bucs quarterback retired in 2022, Darlington and Adam Schefter reported that Brady was calling it quits. Three days later, the quarterback announced his decision to walk away from the game.

So now that Brady is back, there are few better individuals to tell us what happened than Darlington. The reporter joined the Ari Meirov NFL Show on Thursday, discussing Brady’s retirement. Meirov asked Darlington point blank if rumors of Brady attempting to join the Dolphins in some capacity were true.

“That wasn’t really the way it went down,” Darlington said. “I don’t wanna go too far down the wormhole with it. Let’s put it this way. When Brady announced his retirement, he was done with football. There were no ulterior motives. I can tell you that as a matter-of-fact. There were things in the background where he was definitely having conversations. The Miami stuff. Where there is smoke, there’s fire, for sure. Especially with the ownership aspect of [discussions with Miami].

“But the idea that he was trying to get himself to San Francisco, for instance? That was not going to happen. Tom Brady is building a house in South Florida. It was very important to him when he came to the Bucs that he was on the east coast. That was a big part of it because Jack, his son, is in New York. And [Brady] wanted to be closer to him, relatively speaking. So the San Francisco thing wasn’t going to happen. Even if San Francisco would have liked for it to. But we don’t even need to go there. That wasn’t going to be the case.”

Brady retired for just 40 days before returning to the Bucs. During that time, he was in constant communication with Bruce Arians and Jason Licht. He stayed abreast of all the moves the team was making, as well as the course they were plotting for the offseason. About halfway through his brief retirement, Brady started to feel the itch to play again. 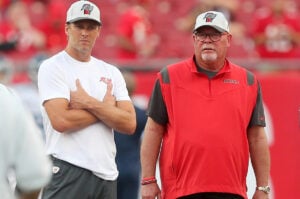 “Once he came back, he was fully committed to the Tampa Bay Bucs,” Darlington said. “That’s the most interesting thing about all these rumors that have gone around. I think they’re delayed. People are maybe just figuring out what was going on behind the scenes, before and around his retirement.

“But once he came back, he was fully committed to the Bucs. He made it very clear to the Bucs organization where he stood with things. Also, he was in clear communication about personnel situations, when Ali Marpet retired. Brady was retired at that point, but he was still looking at those scenarios, understanding that he was starting to get that itch already. So once he came back, it was all about the Bucs. And, as far as I know in all my conversations, which have been pretty extensive, he remains fully committed to playing for the Bucs in 2022.”

The last part is really no surprise to anyone who has paid attention. After all, Brady has had a heavy hand in recruiting the Bucs’ 2022 crop of free agents. He’ll quarterback the team in 2022, then be a free agent this upcoming offseason. At that point, Brady could decide to retire, go elsewhere or return to the Bucs. According to Darlington, even Brady doesn’t know what’s in store for him right now.

But Darlington did say that conversations between Brady and the Dolphins occurred. It sounds like these were post-playing football plans though, not plans to seek a trade. Those discussions were likely tied to Brady exploring potential part ownership in the franchise. Once he decided to return to football, all that was put on hold. Per Darlington, it doesn’t sound like those discussions even got very far. 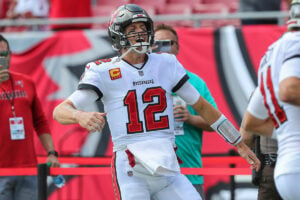 “There’s certainly been conversations,” Darlington said. “Between Tom and…he’s got very close ties to the Dolphins organization. At the same time, I don’t necessarily subscribe to the belief that you can be like, ‘oh that was about to happen’, if you don’t know the ins and outs. People can talk about things. They can negotiate even, if that’s the case. And if something doesn’t happen, it doesn’t happen.

“If you go to the car dealership down the street and you look at a car, it doesn’t mean that you absolutely are buying that car. And if you don’t, you walk away and you move on. With Tom Brady, it’s like anytime he has a conversation about anything with anybody, it’s like ‘whoa, wait! he’s not committed to the Bucs!’. And it just wasn’t to that extent.”

You can watch the full show here, including Darlington’s comments about his experience after reporting Brady was going to retire. It’s pretty enlightening stuff.

I believe the talks with Miami were indeed about partial ownership potential. That being said it wouldn’t surprise me if he decided to go down there next season. Tyreek Hill didn’t hurt..

Given that the AFC has become much deeper this offseason and the NFC has, well, not, I don’t buy Brady in Miami as a player for a second. The Dolphins talk was always believable from the standpoint of potential ownership – ESPECIALLY since Stephen Ross is likely going to be booted from the ownership fraternity if the Brian Flores accusations are verified – but as a player, why willingly choose the tougher road to a championship at age 46? But the story persists because the media needs to keep up the fake narrative about Brady pushing Arians out because he’s… Read more »

Easy. Because it’s down the street from where he lives. And because he’d get to face Bill twice a year. Not to mention.Like the 2020 Bucs, the Dolphins are a Brady away from being a SB contender. Plus, the original rumor was that Sean Payton was gonna join Brady as either the HC, or offensive consultant. The bigger question is, why wouldn’t he want that situation?

The Payton angle didn’t make sense either. He’d made it crystal clear he was not interested in coaching this year and even if he suddenly had a change of heart, the Dolphins would have to trade for his rights with the Saints, and their coffers for 2022 are pretty dry after the Tyreek Hill trade. Plus, if the plan is for Mike McDaniel to be a transitional coach to Payton, that’s just another damning check mark in Brian Flores’s case against the league (since they’re hyping McDaniel up as biracial).

I believe official FA period is over and Antonio Bryant was signed. Does anyone want to start a pool where he does something stupid and gets arrested.

I understand the Bucs and Brady not extending yet because of the unknown future. I’m hoping though that as the season goes on and things started going well and seamless, if Bradys goal is to win an 8th and final ring to complete the set then he’s probably done, but if we get half way through and he knows for sure he wants to play a little longer that he locks it down with us and that’s that.

How about this one. The retired Tom Brady was vacationing in England where he met with the Glazers at a Manchester United game, who promised him a share of the Bucs’ ownership if he returned for a small salary, and bing-da-da-boom, Brady un-retires.

WAY more logical than all the other speculation.

For me, it was only one thing; Brady truly loves the game and more importantly, he loves being a part of a band of brothers. Those who have played in competitive sports easily can have love & hate feelings for the Coaches who demand you can be better,

i agree Horse! For me, I’m just still in disbelief that he is even playing at 45! And there’s talk about extending his contract one or two more years possibly! That’s just incredible. It’s one of the most amazing feats I’ve ever seen in all of sports! Not just that he is still playing, but that he is still playing at the top of his game. Should’ve gotten the MVP. Because he is the MVP! Fact! Let’s enjoy this moment of history in the making. The most incredible 3-4 year span of Buccaneer football. We need to stop with all… Read more »

You’re right about toning down the negativity Bucballer. I guess it’s just habit for some people to demean the ownership, the general manager, the coaches and the quarterback, since the team had many years when that would have been justified. We really don’t have much to complain about these days; yet some will go to great lengths to find any little morsel to say something “sucks”. I remember the days when I just wished we weren’t considered the absolute worst team in the league trying to find a smidgen that well…..didn’t suck.