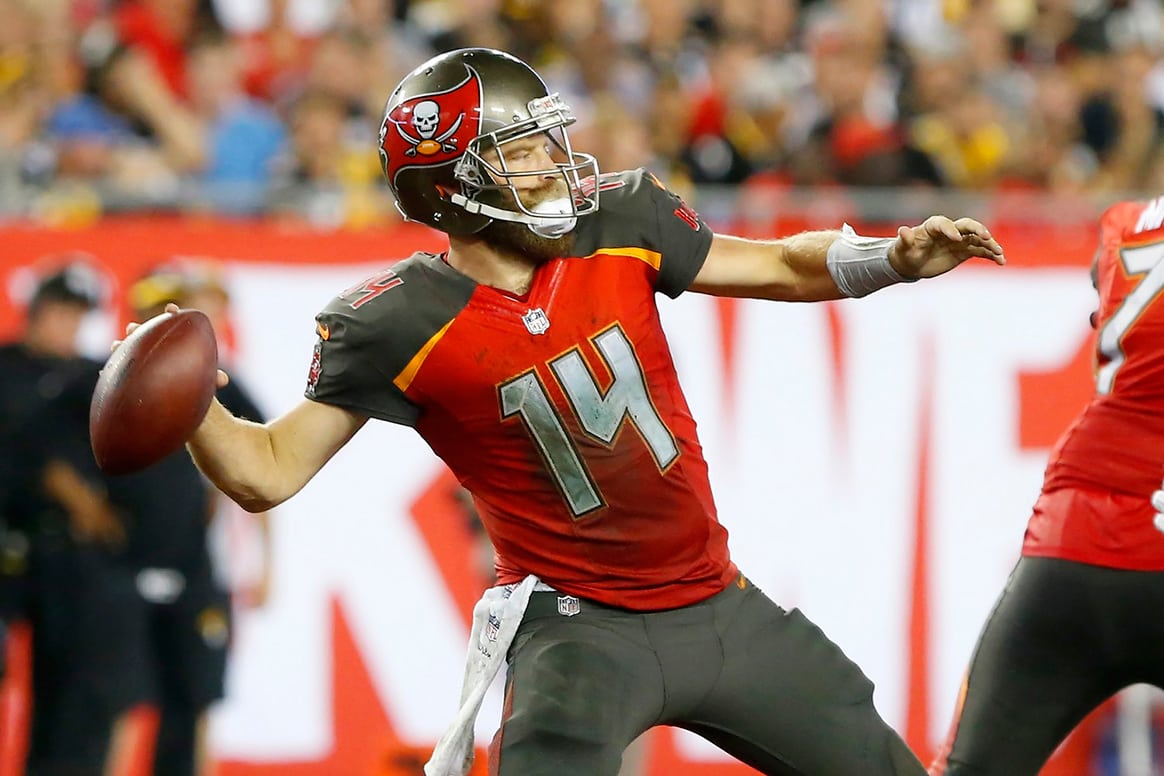 After a career that spanned 17 years and nine teams, former Bucs quarterback Ryan Fitzpatrick is retiring.

Fred Jackson, a former teammate of Fitzpatrick’s, tweeted the following on Thursday afternoon:

Congrats on a Helluva career, Fitzy!! Loved sharing the field with you!! The gratitude is all mine!! #BillsMafia #fitzmagic pic.twitter.com/s7n4DsiLJ7

Fitzpatrick’s time in Tampa Bay was eventful. He signed with the team in 2017 to back up third-year quarterback Jameis Winston. While Winston dealt with an injury at different times in the season, the bearded veteran stepped in. In six games (three starts), he threw for 1,103 yards and seven touchdowns to three interceptions while completing 96 of his 163 pass attempts (58.9%). While Winston served a three-game suspension to start the 2018 season, Fitzpatrick was electric. He threw for 417 yards and four touchdowns on 21-of-28 passing in a 48-40 road win over New Orleans to start the season.

The next week, in a 27-21 win over the Eagles, he completed 27 of his 33 passes for 402 yards, four touchdowns and an interception. That earned him his second straight NFC Offensive Player of the Week Award.

And while Tampa Bay lost his third start — 30-27 at home to Pittsburgh — he became the first quarterback in NFL history to throw for 400 yards in three consecutive games.

Winston eventually stepped back into the starting role in 2018, but “FitzMagic” made another cameo later in the season as the young quarterback struggled. On the whole, the Harvard man totaled 2,366 yards and 17 touchdowns to 12 interceptions in eight games (seven starts).

Following the 2018 season, Fitzpatrick spent two years in Miami before finishing his career in 2021 with Washington. A Week 1 injury cost him the rest of his final season. Now, one of the more unique careers in NFL history is over. And while Fitzpatrick’s time in Tampa was brief, it certainly left Bucs fans with plenty of memories.

Great guy wish him the best. I remember being at that Steelers game at Ray J when the Fitzmagic fizzled. Was fun for few games anyways lol.

All I could think about that whole article was how ugly those Alarm Clock Jerseys were. Why we ever went to those is beyond me. Our current updated Old School Uni’s are the best in our history. Fitz may go down as one of the best backups in history. The only problem with him is if you didn’t have a clear cut Star WB, he would give you just enough to question your current QB but not enough to take you anywhere. But to pick a backup to have on deck to come in in case of injury, he’s be… Read more »

Aww… that sucks. I’d much rather have him here than Blaine Gabbert. Was always a cool guy and his teammates always seemed to love him.

Last edited 1 month ago by CrackerBall

Sure he will have a tv career. Many former player that do turn out pretty dull, but he will be entertaining and has current knowledge of the game as an analyst.

What a truly fun and magical time in Bucs history.

Fitz has always been one of my favorites. He has style, class and has always played the game on all physical and mental levels Trust me, he was not admitted to Harvard just alone on his football skills. He’s made enough to retire for any endeavor he chooses in this life Comfortably. Thanks for the memories, Fitz Your story plays out well.