Former Bucs safety Justin Evans is making a comeback in the NFL and will stay in the division. According to ESPN’s Adam Schefter, Evans signed a one-year deal with the Saints on Monday.

Evans has not played professionally since 2018 due to a series of foot and ankle injuries that kept him off the field.

Tampa Bay’s former second-round pick Justin Evans, who has spent the past two years out of football recovering from injuries, is signing a one-year deal to play safety for the New Orleans Saints, per his agent Kevin Conner of @UniSportsMgmt. He is now healthy and ready to play.

The Bucs drafted Evans in the second round of the 2017 NFL Draft out of Texas A&M. He had a promising start to his career in his rookie season, starting in 11 of 14 games and recording 66 tackles, six pass breakups and three interceptions.

Evans followed that up next season by starting 10 games with 59 tackles, two passes defensed, one interception, one fumble recovery and a defensive touchdown on a scoop-and-score. 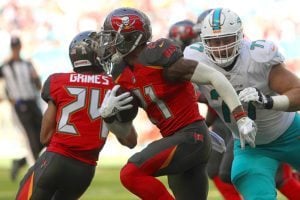 He played in 24 of a possible 32 games in two years, starting 21 of them. But then the injuries really started hitting him. Evans missed the entire 2019 preseason because of an achilles injury. He was then placed on the PUP list in September. Three months later, Evans was waived by the Bucs in late December after failing to pass a physical.

There was a time where Evans was looked at as a focal point of Bucs defense. Unfortunately, he couldn’t avoid a number of injuries. It’s been three years since Evans has been on the field, but his agency says that he is healthy.

The Saints lost safety Malcolm Jenkins this offseason when he retired. Also, Marcus Williams signed with the Ravens in free agency. So New Orleans countered by signing Marcus Maye and Daniel Sorensen in free agency. Evans will have an opportunity to compete for a roster spot in training camp.

Good for him. Always like him as a player. Hope he really was able to fully recover and will be able to come back. Promising careers being cut short like that always suck, so good luck to Evans getting back out there.

I totally forgot about him. Good luck to him but these type come backs rarely work out.

Yes I remember that we selected him instead of Alvin Kamera……

Both Beckwith and Evans looked like good picks. Sad that their careers ended so quickly.

Ouch.LOL. Seemed like he was on IR forever. That hard indoor turf won’t be doing his foot problems any good.

Good luck to him. His first pic was against TB. Thought he was a pro bowler in the making until the injuries hit.

The Aint’s are so into the Sloppiest of our Seconds…

Evans had so much potential. I’d rather he not find that again with those turds. If he’s gonna actually produce he needs to come back and do it for us after collecting pay days and tying up a roster spot for so long.

Not even worthy noting, but I wish him the best. He’s dreaming and in denial that NFL football is over. Just being real here; there is no Rudy story here.