Howard’s Journey To Becoming a Buc Started Long Ago 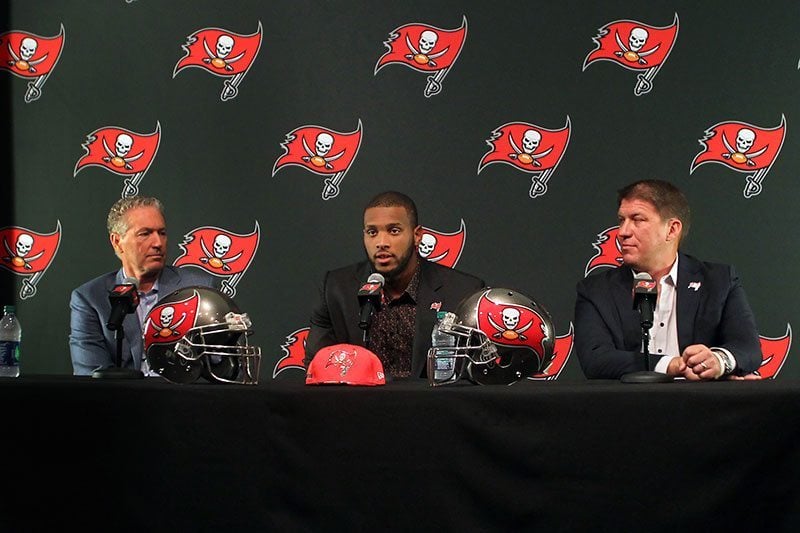 Howard’s Journey To Becoming a Buc Started Long Ago

At about 10:20 p.m. on a late April evening, O’Terrius Jabari Howard got the call to officially become a Tampa Bay Buccaneer as the 19th overall pick in the 2017 NFL Draft.

But, Howard’s journey as a Buccaneer didn’t start last night. Bucs general manager, Jason Licht, said on Friday that his process, on their end, started years ago.

“Our scouts had their eyes on O.J. even last year in 2015 when there was a chance he might have come out,” Licht said.

A key moment in time for the two parties coming together happened at this year’s Senior Bowl. Howard, who was regarded as one of the best prospects in the entire draft, surprisingly opted to participate – something that doesn’t always happen for the high profile players who are invited due to risk of injury.

But, where Howard’s participation may have come at a surprise to us on the outside, that groundwork that Licht and his staff laid for Howard told them that this was no surprise.

“It jived with everything we’ve heard about O.J. over the last few years,” Licht said. “He’s the type of guy who’s a team-first guy who won’t back down from a challenge. So, when he played in the Senior Bowl, it was no surprise to us, but it speaks of his character.” Senior Bowl week was the first time Bucs head coach Dirk Koetter got his eyes on O.J. Howard in the flesh. At Howard’s introductory press conference on Friday, Koetter told the media that it didn’t take long to fall in love with Howard as a potential Buccaneer.

“The first day of Senior Bowl practice in pads, Jason and I were sitting up at about the 35-yard line, and O.J. put on a clinic,” Koetter said. “After about two periods, I stood up and said, ‘Jason I’ve seen the guy I want,’ and I walked down the stairs.”

What helped Howard stand out among the crowd was that in a new generation of tight ends that seem to specialize as either pure pass catchers or pure in-line blockers, Howard dominated at both against some of the best upperclassmen in the draft class – something he’s been doing for years.

“At this level guys are so good,” Howard said at his press conference on Friday. “Everybody is really fast and strong. I have to be consistent in my technique in the run game [when blocking] and also running routes… Everyday at Alabama we start off with a blocking drill. We would do that in team drills, too. Those are two things that helped make me a better blocker. It was either you block, or you don’t get a lot of playing time. So I think that helped me out.”

When it comes to the narrative of Alabama players in the NFL, Howard was asked what playing for Nick Saban was like. Howard said that it’s no surprise to him that Alabama churns out so many draft prospects every year because a Saban practice looks a lot like an NFL practice.

“I think coach Saban and his staff do a great job of getting us ready,” Howard said. “Just the way we practice, he always tells us, ‘This is how the NFL is. You guys have to do it this way, because this is how it’s going to be at the next level.’ It puts us in a place to be successful.”

Most probably think that it must have been a long night for Howard, and that he was probably bummed out that he didn’t go as high as some mock drafts predicted.

But, he responded and said that his agent gave him a ballpark of picks 6-20. He was picked right near the end of that range, but he wasn’t worried about it. He was just trying to take in the draft experience as best he could, knowing that moment and night were once in a lifetime.

“I’ve been very overwhelmed, very excited about it,” Howard said. “This is something that I’ve been dreaming about for a long time. Just to finally be here and be a part of it, it’s amazing. A lot of hard work was put in before this day, and it’s finally paid off.”

Howard was asked if any players on the Buccaneers team reached out to him after he got drafted. He said a few of the players did reach out to him, but the first was the one you’d want it to be; it was Jameis Winston. He said that Winston welcomed him to the family in his text, and when the media asked Howard what he admires most about his new quarterback, it was that quality – being the leader, being the first to reach out to a new teammate, welcoming them in – that he respects the most.

“Leadership,” Howard said. “I love the enthusiasm he brings on [and off] the field. He’s a competitor and I think that shows.”

Near the end of his media availability, Howard said he was already hoping to get a playbook in his hands later that day.

Sometimes you feel like a coach or a front office staff has to sell a player they bring in to the media. Sometimes you can hear them pitching it like a potential business idea, praising the good and hiding the bad.

With Howard, there wasn’t any of that. He was an open book, and there was a lot to like.

“I’m very excited to get to work. I know we have big things coming in the future. Go Bucs.”

“One reason #Bucs passed on #FSU RB Dalvin Cook in the 1st: Source says the most impressive player thus far in training has been Doug Martin.” – Ian Rapport / NFL

Any comment, gentlemen? This would be great news if it is true.

It was because O.J. Howard was available!

e, that sounds like a very strategic leak right there. it’s meant to make other teams think they should part with more than a 6th rounder to get doug, but i think the reality is that Dalvin Cook still being on the draft board has more to do with the Bucs’ own evaluations of the prospect and the availability of players they like better than dalvin.

Oh, they games they play!