With Breshad Perriman’s contract situation up in the air, and the uncertainty of Justin Watson and Scotty Miller moving forward, a third wide receiver is an underrated, critical need for the Bucs this offseason. Head coach Bruce Arians has always utilized at least three receivers in his offense, and Tampa Bay’s offense might not have a third option at all if Perriman departs free agency – unless tight end O.J. Howard really takes off in his fourth year in red and pewter. Still, it’s unlikely the Bucs will take a receiver before the third day of the draft, due to other needs, and the fact that the offense will continue running through Mike Evans and Chris Godwin, easing the workload on whoever steps into the No. 3 spot.

Now that the NFL Scouting Combine results are in from Thursday’s workouts, we can compare some of the results of this year’s class against the seven receivers Jason Licht has drafted in his six years as general manager, looking for common traits across the groups in order to see which receivers the Bucs may target.

Godwin and Evans are the only receivers Licht has drafted in the top 100, and both obviously topped the 6-foot-1 barometer. Additionally, former first-round pick Breshad Perriman is 6-foot-2, and Arians has described him as a receiver who “fits what we are looking for,” which is likely a reference to his physical and athletic skill set.

Based on the six-year sample size we have, if the Bucs go for a wide receiver in the first three rounds, he’ll likely be at least 6-foot-1 and at least 210 pounds. Of course, such a move remains unlikely, but it’s a safe bet Licht will look for pass-catching help on Day 3 of a deep draft. 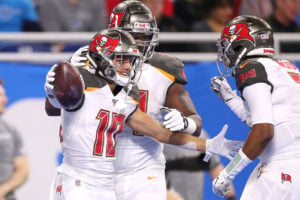 The projection gets murkier there, as Licht has taken receivers as short as 5-foot-9 at that point in the draft. Kaelin Clay (2015) was 5-foot-10, while Robert Herron (2014) and Scotty Miller (2019) are both 5-foot-9. Granted, none of these receivers were taken before the sixth round, and Clay was likely drafted solely for his return skills, but it still keeps shorter receivers on the table for the Bucs on Day 3 of the draft.

Every NFL team wants speed, but the Bucs covet speed at wide receiver. Check out the 40 times of the pass catchers they’ve drafted:

It’s pretty safe to say that unless a receiver runs in the 4.4s or better, the Bucs probably aren’t interested in drafting him (unless he is built like a tight end a la Evans). That should take a number of Day 3 receivers off the board and help us focus on a lower number of potential targets for the team.

Following our rules, which of course aren’t infallible, these notable receivers who could/should be day three picks would be eliminated:

Of the seven receivers Licht has drafted, five had vertical jumps of at least 35.5 inches, with Miller (34 inches) and Clay (33 inches) being the exceptions. Remember, Clay was drafted as a return specialist, so we can almost rule him out. Generally speaking, Licht values vertical explosiveness in his receiving prospects, especially with the big guys. If you’re a big receiver who can’t get up, he probably isn’t interested. Using 35.5-inch verticals as a threshold for the Bucs’ interest in receivers, here are the notable receivers you can rule out that are could be drafted outside of the top 100:

That’s two strikes against Jennings, Mack, Hill, Fuller and Davis. It doesn’t take them totally out of consideration, but it does make them unlikely to be players the Bucs target on Day 3 of the draft based on their draft tendencies at the position under Licht.

I’m not sure the Bucs would use broad jump as a disqualifying test, but their draft history at the receiver position suggests it’s a test they value. Godwin, Bell, Miller, Watson and Herron were all 10’3″-10’9″ in the broad, while Evans didn’t do a broad jump pre-draft. At the very least it shows the type of receivers the Bucs value, ones with speed and explosiveness above elusiveness and agility in space.

And The Winners Are …

Two drills the Bucs don’t seem to care much about in their drafting is 3-cone and short shuttle. It’s just as well, as Rotoworld’s Hayden Winks’ has studied and written about how agility drills don’t matter much for wide receivers at the Combine.

So who fits the criteria of what the team does value? Here are the receivers that could or should go outside the top 64, that also have at least a 4.4 in the 40-yard dash and a 35 1/2-inch vertical jump:

If we believe the Bucs won’t select a receiver until the third round or later (probably on Day 3) in the 2020 draft class, one of the above players is most likely to be their selection out of the receivers that worked out at the Combine. I’ll be focusing film studies on a handful of them over the next few months until the draft, so we can have a better idea of what they bring to the table on tape – and possibly to Tampa Bay.

Though you make a good point about Perriman, my thoughts are that at least half of the guys that you have on your list will go undrafted!
This is one of the deepest draft in years at the wideout position and the Bucs are loaded. Nothing surprises me anymore but the Bucs had better be targeting at least 3 offensive lineman in this draft.

We may have a small question mark at WR3 but we need an Answer at Right Tackle!

UM’s KJ Osborn was solid, but on the other side, was Jeff Thomas, who needs to be looked at. He’s clutch, has great hands and would be a great #3.

I think Devin Duvernay is the guy they want. He looked good in the combine and has some decent productivity in college.

I wonder but am not certain but I think college production is missing from this article. If that is the case, Devin DuVernay makes sense for the Bucs.

How about Michael Pittman Jr that might be available in the 4th rnd since we have 2 picks, one bc of compensatory?

Nice to see an article on here that uses relevant historical tendencies to form logical conclusions.

It appears all but certain the Bucs will put a toe in the WR pool considering the depth and expiring contracts next season.

@e I agree with you about Jeff Thomas. Very quick and criminally underutilized in Dan Enos’ pathetic offensive scheme and terrible QB play. If you could nab him in the fifth I would love that.

I’m intrigued by Gibson and Claypool.

Evans, Godwin, Miller, Watson, Bell, and Herron all had ridiculously more production than someone like Donovan Peoples-Jones who is 1st on your list.

Hope I get a response

Yes, Chef… his numbers are low because of terrible QBs. He’d also be great in the return game.

I thought it had not been determined that we had a Compensatory pick yet? Did I miss something?

Interesting analysis Jon. I too would like to know how much you value production. Looking at so many of New England’s successful small receivers, I wonder how many of those guys fit the mold. Can you measure how tough a guy is catching the ball over the middle?

Good work Jon. From what I remember about coach Arians is that size is not that big of a criteria for him as speed is his top priority. Miller is a good example of this as many had doubts if he could play in the NFL but coach Arians didn’t seem phased by his lack of size. Also the Bucs signed DJAX as a free agent not too long ago so size isn’t everything. I think the importance of size is magnified somewhat if Winston returns but if a more accurate QB is the new starting QB that shifts the… Read more »

I’m most interested in finding a quality return specialist out of the group of Day 3 prospects. My “Run Michael Run” poster seems like ancient history.