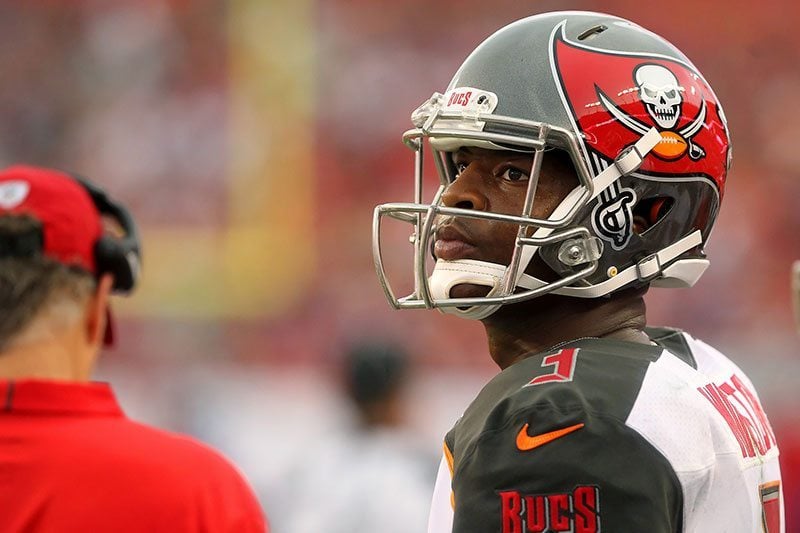 Bucs quarterback Jameis Winston held his weekly press conference  as he does each and every week and PewterReport.com will provides a full transcript. Here is what Winston had to say on Tuesday from One Buc Place.

(On the opportunity that the Buccaneers have in front of them on Thursday)
“Really just a blessing for me personally – I don’t like talking about me – but to get a chance to witness greatness in front of us with Tom Brady coming into town, it gets you pumped up. It definitely makes you think about how hard you worked to get to this point. I’m thinking about what I’m going to say to him when I see him and meet him. But yeah, you’ve got to be excited. Thursday Night Football – you’re the only [teams] on TV and it’s in your home stadium, so we’re definitely pumped about that.” (On if wide receiver DeSean Jackson missing part of OTAs slowed their chemistry with one another)
“I wouldn’t say that. I think I’ve just got to get on track with him. I have to play better in all respects. He’s been doing what he does – he’s been open a lot. Again, it’s the third game. I don’t want to get into a talk about, ‘Oh, I’m going to do this. I’ve got to get D-Jack the ball.’ It’s obvious I need to get him the ball. He is going to make this team better. At the same time, he’s happier with winning than anything else.”

(On Thursday presenting an opportunity for Jackson to show off his ability)
“Absolutely. That’s what he does. He is a big-time player and he makes big-time plays in big-time moments. I’m patiently waiting. I’m definitely looking forward to the next opportunity I have to get him the ball downfield because that’s going to be special.”

(On what changes getting running back Doug Martin back)
“Nothing changes for us as a team. Obviously, we love to have Doug Martin in the locker room, so that is the best part. What he does on the field – I know he is going to do great on the field, but we’re just happy to have him back in this locker room, back with us so we can be there to support him and get this thing rolling.”

(On if Tom Brady is the guy he is chasing to be considered the greatest quarterback of all time)
“Yeah. Growing up – Peyton Manning, Tom Brady, guys of that nature and more – every successful quarterback that was playing when I was coming up, I admired them. Tom Brady, in particular, he is the winningest. He has won more Super Bowls than each of those guys, so to me that is the most important part. His ability to protect the football and take advantage of those opportunities when they are given to him is impeccable. Just studying him, just seeing how calm he is [and] how precise he is, is very impressive. That is the reason why every offseason, every rep I get during the season that I’m trying to be better and better because I know that he’s still out there playing. He’s still getting better and better. He should be an inspiration. Him and Drew Brees and a couple of the older veterans that are still playing to this day are just inspirations for young guys like myself and the other guys coming into the league to continue to work, continue to get better and that’s it.”

(On the way Brady interacts with his teammates and if he tries to emulate that)
“I mean that’s in-house things. You see his leadership with his team. We have all different types of leadership within teams. Obviously, he’s a great leader [but] I’m talking about play because that is very important. Imitating his leadership is huge, but the way that he plays – if you can imitate that, you’ll have more people happier with you.”

(On he feels physically)
“I feel good. I’m excited for this game.”

(On how different he expects the Patriots looks to be on Thursday as opposed to what he has been watching on film)
“We’re expecting them to throw some different stuff at us. It’s definitely going to be a game where you’ve got to trust your eyes and trust their look. They’re a team that is going to do what they do and they’ve had success at that. Definitely us being on the same page and executing – that’s the main thing – us executing at whatever they throw at us. We just need to execute and complete the football.”

“I just hugged him. I think it was great just to have him back in here because he is part of this special team. This team has a one-year lifespan – if that really, because people can come and go at any time – and not having him there for the first three games, as a team, it was good but it wasn’t like, ‘Where’s Doug?’ I’m happy that he is back. I’m excited for him in this game.”

(On if it’s better that the Thursday night game is early in the season)
“I mean I want to play on Thursday night when there is a game. I think that notion of people saying, ‘No one wants to play on Thursday night,’ that’s because [of] a lot of different things. I think when it comes to the game, we are ready to play the game. It’s tough for a coach to game plan for a Thursday Night Football game because you’re just coming off Sunday and now you’ve got to game plan [for] the defending champs – of course it’s tough. Last year he had to game plan the NFC representative of the Super Bowl so I think it’s challenging, but we’ve got to be open to those challenges. We’ve just got to go out there and play – that is the most important part. At the end of the day when the game is over, you get a ‘W’ or you get a loss. They don’t say, ‘Thursday Night Football – asterisk.’”

(On if he goes into the game thinking that the offense is going to have to match whatever they see on the other side)
“It’s just complementary football. We go in there just wanting to execute and do our job. [We’re] not really worrying about their offense. [We’re] worrying – not really worrying – but preparing for their defense and just playing the game. If the game happens to be a high-scoring game, it will. The main thing is we can’t put ourselves in a situation to take us out of the game. We know that they have, again, one of the greatest quarterbacks of all time and we know what he can do.”

(On what it means for Dirk Koetter to have faith in him in terms of calling plays in games that he works on with teammates after practice)
“It’s good. Like I’ve said, those are guys you can trust. You see arguably one of the hardest working players on our team (Cameron Brate) out there working all the time with the quarterback, of course when you come to the head ball coach and say, ‘Hey, coach. We can get him on this.’ He trusts it because he has seen it. He knows that we’re going to execute that. Other than that, our coach does a great job of putting us in good situations. But that was fun that we were able to execute on that play knowing the work that we put in after practice.”

Winston is what was missing at OBP for many years. Go Bucs!

I agree Horse. Been a long time coming, but this stew has been brewing for a while now and we’re just getting the first servings. Watched a program on NFL Network last night called the Elite 11 and they’re still talking about the time Jameis was one of the 11. See the man then, see the man now. Still the same guy, just getting better. Go Bucs!

Wow, another WE diva complaining he isn’t getting the ball again. That’s about as surprising as Trumps tax plan benefiting mostly the tuber rich, himself and huge fat corporations that are already sitting on the biggest pile of cash reserves in history.

I hope D. Jax does not become a DISTRACTION.