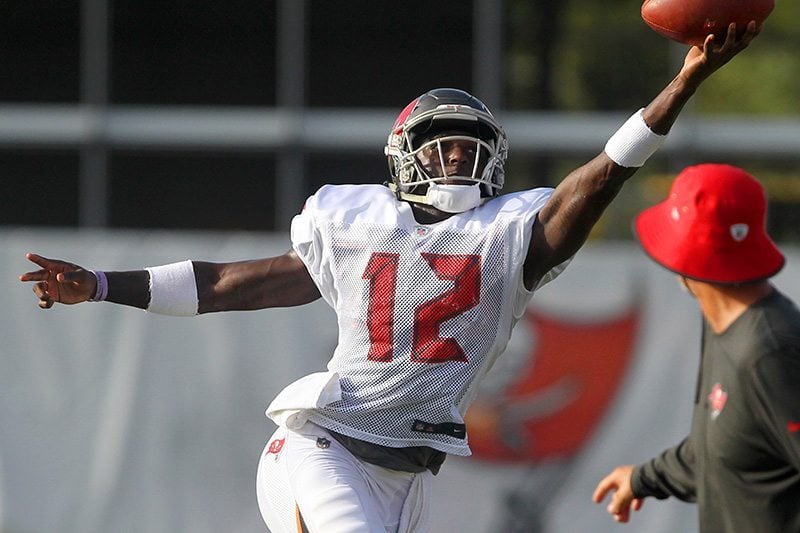 For the last month we’ve been giving you updates on Bucs OTA practices, but now, play time is over and it’s time to get serious with Buccaneers mandatory Mini-Camp.

Ok, so maybe it’s not all that different. But, on Tuesday, Bucs practice was different in the sense that all 90 players (those who were healthy) were out on the practice field, including defensive end Jason Pierre-Paul, cornerback Brent Grimes and wide receiver DeSean Jackson.

With all players available, this was the starting lineup for the team’s first 1-minute drill.

#Bucs open up their Tueaday mini-camp practice with a 1-minute drill.

Starting WRs: Mike Evans and Chris Godwin outside, DeSean Jackson in the slot

Starting CBs: Brent Grimes and Carlton Davis outside, Vernon Hargreaves in the slot

There are some key difference there from what we saw in 2017.

For one, Chris Godwin was getting most of the starting reps on the outside, even with Jackson there. But, that wasn’t to say Jackson didn’t get his reps, they were just more of a mixture than solely on the outside. On the flip side, rookie cornerback Carlton Davis was lined up as the team’s starting outside cornerback opposite Brent Grimes. Head coach Dirk Koetter raved about Davis during the rookie mini-camp and OTAs, so him being a starter right away for mini-camp is good to see.

Hargreaves in the slot in the red zone drill. He’s getting the hang of this and getting confident. Punches this one out at the last second. pic.twitter.com/YXyzrdeE3x

Another difference in the depth chart was cornerback Vernon Hargreaves starting as the nickel cornerback when the team went into their “sub package,” meaning more than just two cornerbacks on the field.

Hargreaves was “demoted” to nickel duties last season after struggling in the first few weeks as an outside cornerback and thrived as a nickel player before getting hurt. It seems like he picked up right where he left off in the nickel.

Remember that confidence we just talked about?

Defensive coordinator Mike Smith told us about a month ago that this was likely going to be the plan with Hargreaves. He’ll play some outside cornerback duties in base defense, but when it comes to nickel and sub packages, Hargreaves will be the first one on the inside.

It seems to be giving him added confidence.

With Grimes in coverage, Winston just barely overthrows WR Jackson for what would’ve been a 40+ yard touchdown. Still a work in progress… pic.twitter.com/4TvGUdOUd8

The most popular narrative to talk about during the summer this offseason has been quarterback Jameis Winston’s deep ball accuracy, specifically when referencing wide receiver DeSean Jackson, as he is the main deep threat on this team.

On their first attempt at a pass of over 40 yards in mini-camp, they were unsuccessful.

Okay, okay. We see you. pic.twitter.com/ME7c7kN6T4

But, as the day went on, Winston seemed to get more comfortable with Jackson and the other receivers, for that matter. In the play above, the Bucs had a great design to almost have a double pick, making defenders in man coverage run through traffic to keep up with players, which is especially difficult again a player like Jackson.

More creativity with Jackson’s speed would be welcomed for 2018.

That’s O'Terrius Jabari Howard to you.

Heck of a touchdown grab in the red zone for O.J. pic.twitter.com/VwdE2qQQar

Howard had one of two fantastic red zone grabs for touchdowns on Tuesday at the first mini-camp practice, and it was good to not only see the play be made, but be made by Howard, who seems to be more comfortable in his skillset going into his sophomore year.

What an incredible touchdown catch in the back of the end zone from Chris Godwin! Wow! pic.twitter.com/spDwHGMcfY

The other spectacular red zone grab was done by Chris Godwin, and we don’t need to tell you how good it is to see that, as Godwin has emerged as a player who will get starting reps.

It was some stiff, friendly competition out there for Tuesday’s practice, and we should expect much of the same for the rest of the week.

DeSean Jackson in the slot. This is smart. Godwin has earned the chance as a Starter on the outside.

Finally DeSean Jackson in the slot. But it will be a good move only if they give him good route combinations unlike last year where he was just running go routes most of the time

He’s very good in the slot just can’t setup him up to get creamed right after he touches the ball, if you do he will drop on purpose. Also can’t believe that Winston is overthrowing him Jackson can make pretty huge adjustments while the ball is in the air as his routes start around 90% of his full speed.

This is good to see! I hope for the fans sake and the teams that there were some plays made by the db’s though..

This is good news. They are playing our WRs and CBs just like i had hoped.

Evans and Godwin outside and Jackson in the slot.

Grimes and Davis outside and Hargreaves in the slot.

Coaching staff actually seems like they know what their doing this year.

Trevor, Thank you for the up date.

Godwin’s body control reminds me a lot of Mike Williams out there. We all know how good he could have been with a head on his shoulders like Chris has!
So far I’m sensing less banging my head against a wall in this upcoming season. Do what makes sense, coaches and players! We have the talent to beat teams with talent now. Keep it simple.