Inside Bucs Camp 8-1: Defense Back In Driver’s Seat

Home » Articles » Inside Bucs Camp 8-1: Defense Back In Driver’s Seat 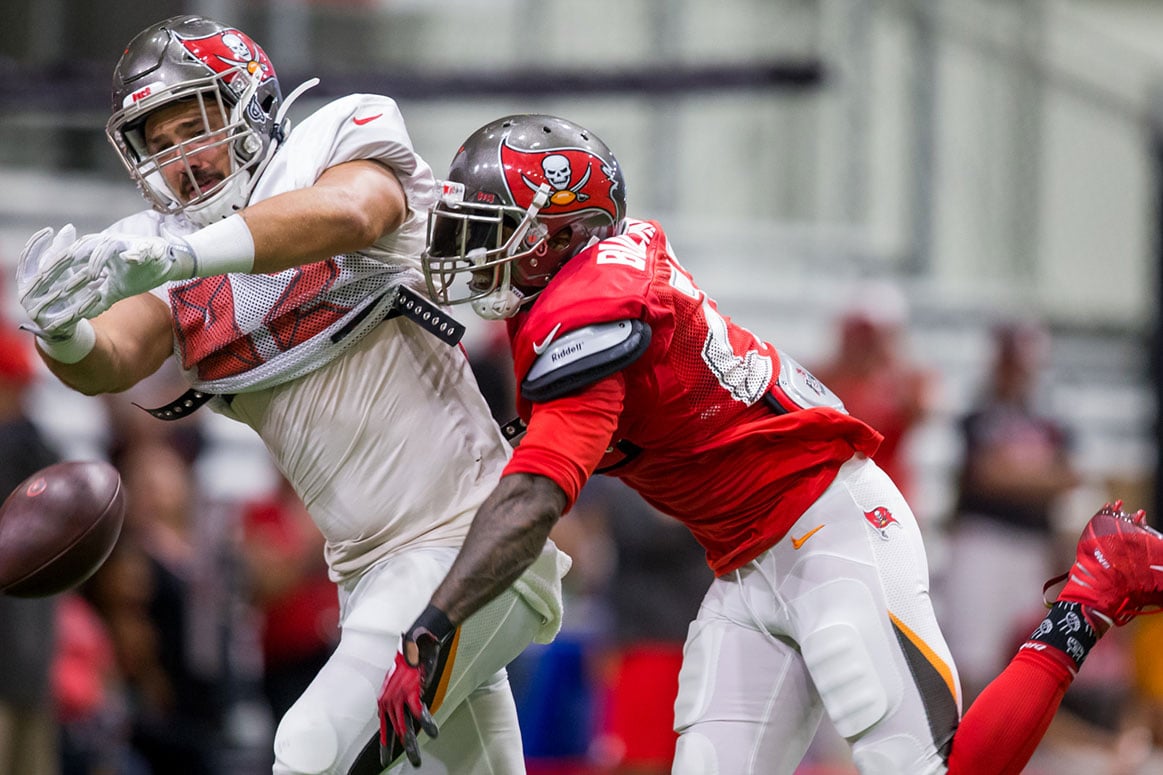 Inside Bucs Camp 8-1: Defense Back In Driver’s Seat

Home » Articles » Inside Bucs Camp 8-1: Defense Back In Driver’s Seat

In a day at One Buc that was kicked off on a bright note with the organization holding their annual Women of Red event, the atmosphere within the offensive huddle by end of practice must have felt as dark and gloomy as the sky in Tampa Bay for much of Thursday.

Despite the offense coming off their best day of training camp yet, practice quickly shifted back to what the media and fans have become accustomed to seeing thus far, a completely overwhelming defensive force out of defensive coordinator Todd Bowles’ guys.

In addition to the usual suspects, Justin Evans and Nick Fitzgerald, Thursday saw wide receivers K.J. Brent, a free agent addition made in the offseason, and DaMarkus Lodge, an undrafted free agent out of Ole Miss, held out of practice.

From the very first period of one-on-one’s between wide receivers and defensive backs, it was the defensive side of the ball that ran the show. The standout performance from that unit started quickly with an interception by M.J. Stewert off of Jameis Winston, a nice lockdown play by Vernon Hargreaves and more that continued for much of the day.

Vernon Hargreaves starting strong today in these 1-on-1 drills. pic.twitter.com/IxSRDtOA4I

While it’s bittersweet for fans to see one unit outperform the other in training camp at this level, with a unit that was on pace for historic levels of under performance it’s good to see a resurgence.

After Stewart’s pick, moving on to the first period of 11-on-11’s D’Cota Dixon added another interception to his resume this training camp as Winston stepped up in the pocket to avoid pressure and fired a pass downfield that was jumped by Dixon and taken home for six. Later in the same period Ryan Smith nearly had a pick of his own, but couldn’t come down with it.

Another training camp INT for S D'Cota Dixon. James Winston steps up in the pocket but Dixon reads the pass and takes it home for six. pic.twitter.com/s1cPgXP2XM

Ryan Smith has a near pick. pic.twitter.com/2o5tODmWxH

Moving on to red zone drills Carlton Davis got in on the action, jumping the route intended for Breshad Perriman and adding an interception of his own, Winston’s third thrown pick of the day.

A few plays later Jeremiah Ledbetter deflected a pass at the line and Kentrell Brice made a diving play to intercept the Blaine Gabbert attempt.

Interceptions and pass breakups were the primary story today, although as you can read in our Winston Watch, the offense was able to rebound later in the day. All in all, it was a phenomenal day from the defense as a whole.

Vea And White Shine Up Front

To continue the theme of the defensive proficiency on Thursday, 2018’s first round draft pick Vita Vea and 2019’s first round pick Devin White showed glimpses of being a remedy for the future to a defensive front seven that racked up just 22 sacks in 2017.

Vita Vea blows up the play for a TFL. pic.twitter.com/fmRz9Elxm0

With Bowles’ aggressive scheme, Vea and White will be instrumental in bringing the pressure up the middle that is relied on for pressures.

Vita Vea is all over this one. pic.twitter.com/k8rpBOXvFr

White hasn’t been perfect to this point in training camp but he has shown bright spots of the incredible talent that he could bring as a rookie. He has looked great all camp when attacking gaps in the run game and has even flashed moments of brilliance when timing snaps and attacking the A-gap or edge when blitzing.

Devin White flies in and stops the run. pic.twitter.com/RxIgNNGKZe

Ogunbowale Making A Case For Himself

When Dare Ogunbowale’s name was discussed after Bruce Arians took over as head coach of the Bucs, it was largely revolving around the roles that he could play as a returnman on special teams. With Ronald Jones likely being viewed as the back with the most potential by fans and the organizations, Peyton Barber’s running style repeatedly earning praise from Arians and Ellington bringing the experience of playing under Arians in Arizona, Ogunbowale seemed largely in the back seat of the conversation alongside rookie and Tampa native Bruce Anderson.

Barber and Jones are likely in a two-dog race for the starting spot, but Ellington is beginning to age and has dealt with injury concerns for much of his career. Ogunbowale would save a roster spot by being a returnman and running back, and his ability that he’s shown when catching the ball out of the backfield would be useful as that’s been a noted deficiency in Jones’ game and something that Barber was primarily taken off the field for last season in favor of a familiar face in Dirk Koetter’s offense, Jacquizz Rodgers.

During practice today, Ogunbowale had a strong period during the team’s first set of 11-on-11 drills, making a nice catch and taking two solid runs to the outside and around the edge. Then in red zone drills he was able to punch in a touchdown from inside the 10-yard line. Ogunbowale will be a name to keep an eye out for as training camp continues.

From reports I’m reading including this one, the defense is dominating again today. Now I’m the patient sort and willing to give the offense time to learn a new system, but Tuesday, August 13…10:00 a.m. is Joint Practice/Dolphins. If the INTs and defensive dominance continues, I’m going to start to get to get a little worried. Still believe they will get better, but need to see that progress by then to feel like we’re on our way. Go Bucs!

The reason I picked Tuesday, August 13…10:00 a.m. Joint Practice/Dolphins is that Miami’s new defense is said to be a multiple-front, defensive back-centric malleable defense that can be adjusted on a weekly basis to counter each opponent similar to the Bucs Todd Bowles defense. We will have already faced a 3-4 team, Pittsburgh the week before on August 9th. That practice week also ends with our second pre-season game. Having seen the best of Bowles defense, we should by now be well-prepared to handle a similar defense. We need to get off to a good start. If not, then yes… Read more »

Could it be that our putrid secondary from last season is “fixed”?

If the defense is fixed, and they really have become “That” good, then ok, I can forgive the offensive hiccups. Hopefully it’s not a dismal offense making them look good.

Winston can do better even if the secondary is improved IMO.

Like seeing the huge quantum leap that Vea has taken in his second year. VH3 may be salvaged afterall. And I think the Bucs keep four RB’s anyways.

This will be a completely different defense this year, we’re seeing it already. I’m worrying more about Jameis at this point. Three picks today? I bet Brees doesn’t throw three incompletions, let alone three picks in a practice. The first one that the safety took to the house Jameis does a good job stepping up in the pocket, then throws late over the middle, WTF? He shouldn’t be doing that shit anymore. I know it’s practice, but how about practicing not throwing picks? That pick six was inexcusable. If he couldn’t check down, get a few yards, and slide down,… Read more »

Allen Iverson famously said “Its Practice”.. Push Pause on that Panic button Its Practice. What I would like to see though is C Ryan Jensen do a better job of recognizing some these blitzes. His job is to set the protection schemes for what the defense shows him pre snap. There are a lot of blown assignments out there and we saw the same thing last year with the guards blocking the wrong guy. There is no excuse for this unit because they have been playing together for a year now. They’re being “Punked” by a Defense with a bunch… Read more »

“that’s been a noted deficiency in Jones’ game and something that Barber was primarily taken off the field for last season in favor of a familiar face in Dirk Koetter’s offense, Jacquizz Rodgers.”

Are you saying our running game and use of our backs was predictable? Say it ain’t so?

Reasons why, at this point, I am not worried about the defense dominating so far: 1. Defense is always ahead of the offense at this point in camp. Just the way it is. 2. With both sides learning a new system, incorporate new disguises and throwing wild blitzes should be easier to implement than a whole new offensive system 2a. While trying to learn a new system, the offense is dealing with the above exotic blitz packages, adding additional difficulty. 3. Jameis/the offense have always struggled against 3-4 defenses. Even if the struggles are more than what should be expected,… Read more »

Goodfellow agree with above. Pretty much all he way it is and way I see it as well. Not playing always from behind and being balanced with run should fix Winston’s TO issues. Not really concerned with it. I am hoping this team can run ball average or better. Will help defense and everything if they can. On another note I’d like to see us grab another veteran RG that maybe can play other positions as well. I don’t think they will though. I’m not saying Cappa sucks or won’t be up for the task but the depth overall is… Read more »

I couldn’t disagree more with the idea of “it’s just practice.” And quoting Allen Iverson? How about Michael Jordan? Those Bulls’ practices were the most legendary in sports history. Just brutally intense, competitive, focused, detail-oriented. Anyone think Tiger Woods practices aren’t sharp and didn’t correlate to his live game? Tom Brady? Drew Brees? The Bucs defense of yore? Details, intensity, focus, perfection through perfect repetition, competition. Practice_absolutely_matters. You’re training your neurological system to deploy under acute stress. However you train it…that is how it will deploy live. So yes, the slow starts, the poor decision-making, the poor ball-placement in practice… Read more »

Nobody, I agree with you. Those who know me know that I was having some Friday morning Fun Lol.

That (b)? That is what kills you in the NFL. It profoundly offsets (a) and then some. That has to be drawn back dramatically (grades of 0 are fine…-1 or -2…killers) for us to be a play-off team (regardless of defense and kicking…which both also have to improve significantly).

Agree that the apparent improvement in the defense is welcome and long overdue. It’s hard to accept or excuse the frequency of the interceptions. The only excuse would be that the coaches are telling Jameis to push the ball downfield and not take the check down. A fifth year pro should NOT do this in game situations. We’ll see more against the Dolphins. Should be an interesting year.

While I’m not all too happy with the picks Winston has been throwing..I’m super excited about our defense this year..I hope we can get back to being that gritty defense that teams hate to face.

Yes, Drew Brees doesn’t throw int’s in practice, but he has been in the same offense for well over a decade.

If our kicking game improves (it couldn’t get worse), our running game becomes only average, and we have just an average defense, and we get better in-game coaching from the HC, this team will be competing for a wild card.