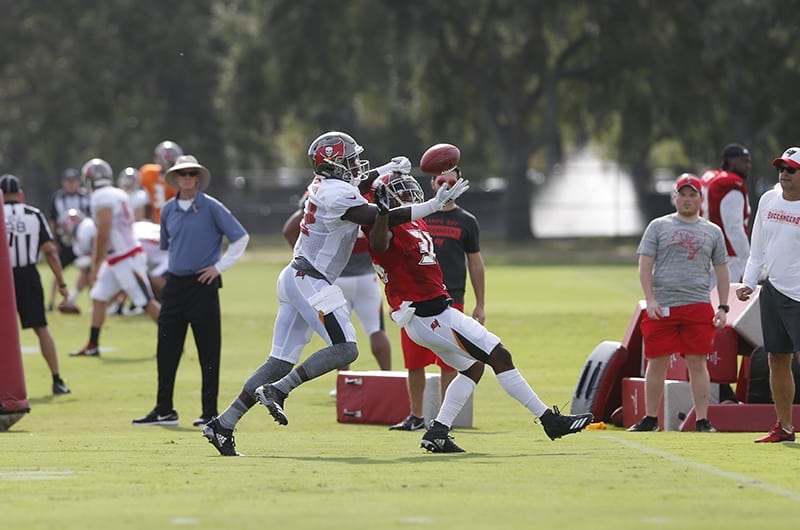 After a day where the offense really struggled to get anything going on Tuesday, Wednesday’s practice was much more on-point, thanks, almost in-full, to one man.

But we’ll get to that in a bit.

An interesting development in Bucs camp is how that battle for the starting right guard job is shaping up. Last year the Bucs wanted Kevin Pamphile to take the opportunity to be a starter at left guard by the horns and he never did, and that was disappointing for the team. This year they’re in that same type of scenario but at right guard.

The battle for that position is between Caleb Benenoch and rookie Alex Cappa. After getting thrown out of practice for a minor fight on Sunday, Benenoch has been rotating snaps with the rookie, and on Wednesdays we saw Cappa lining up with the first team at that right guard spot.

We’ll keep monitoring the situation as camp goes on, but right now it might be Cappa in the lead.

Lampman with a great catch, a broken tackle and a Gronk Spike pic.twitter.com/Np9UN3dxx5

There were a lot of one-on-one drills going on during Wednesday’s practice, first between the trench players and then between the skill positions.

Lampman has had a few noticeable moments in camp so far, including the clip above where he made his way into the end zone after besting Mark Myers.

Speaking of getting the better of defenders, tight end O.J. Howard as been looking crisp and confident in camp thus far, and plays like the one above are where it is most noticeable.

Howard’s route tree was pretty limited last year. This year it seems they’re totally opening things up for him — and he’s delivering.

And, as promised, we’ll finish up our offensive recap with the man who stole the show on Wednesday was wide receiver Chris Godwin.

Stewart plays him tough, but Godwin would not be denied (even with pass interference) pic.twitter.com/AYQrrxdCcn

That catch above is just ridiculous.

Godwin had a quiet start to camp, but over the last few days has really turned it on, including today where he took total control of the offense as the rest of the starts on the cast seemed to shrink for a day.

It is Chris Godwin day here at #Bucs camp. He’s making highlights out of everyone: pic.twitter.com/eTAx9TOimf

Godwin was making highlights out of everyone whether it was in 1-on-1s, 7-on-7s or the full 11-on-11 scrimmage.

If you’re wondering to yourself just how big of year Godwin might have in 2018, the answer to that question is: However much the Buccaneers want to let him, because it looks like the sky is the limit.

trevor- who was throwing to godwin?

I get so hype for this kid. I’m so excited about the possibilities for this offense. Howard’s Nike was silly, Godwin’s hands are like glue, the defense is making stand out plays and the rookies like M.J. Stewart and Davis having good days as well as JPP being dominate. I know I’m way too excited but shit, lets see some serious progress and a winning mentality for a change. Unlike some, I’m glad to see Jason Licht get his exstension. It’s a Bucs life, lets hope it’s a better one this year.

Dirk wants to run 1/2 the time, but with the Bucs weapons it probably makes more sense to be 65% pass and 35% run, unless the Bucs have the lead late in a game.

Every coach wants their team to run half the time. They want their offense to be balance. That doesn’t mean its gonna happen. Hopefully Dirk calls plays according to what the defense gives him.

Just remember…Winston is 2nd in the league in turnovers.

Nice to see whats going on here. Mike Evans being Mike Evans. Two really talented tight ends and Desean with the speed over the top. Godwin is in a great position this year to make a lot of plays