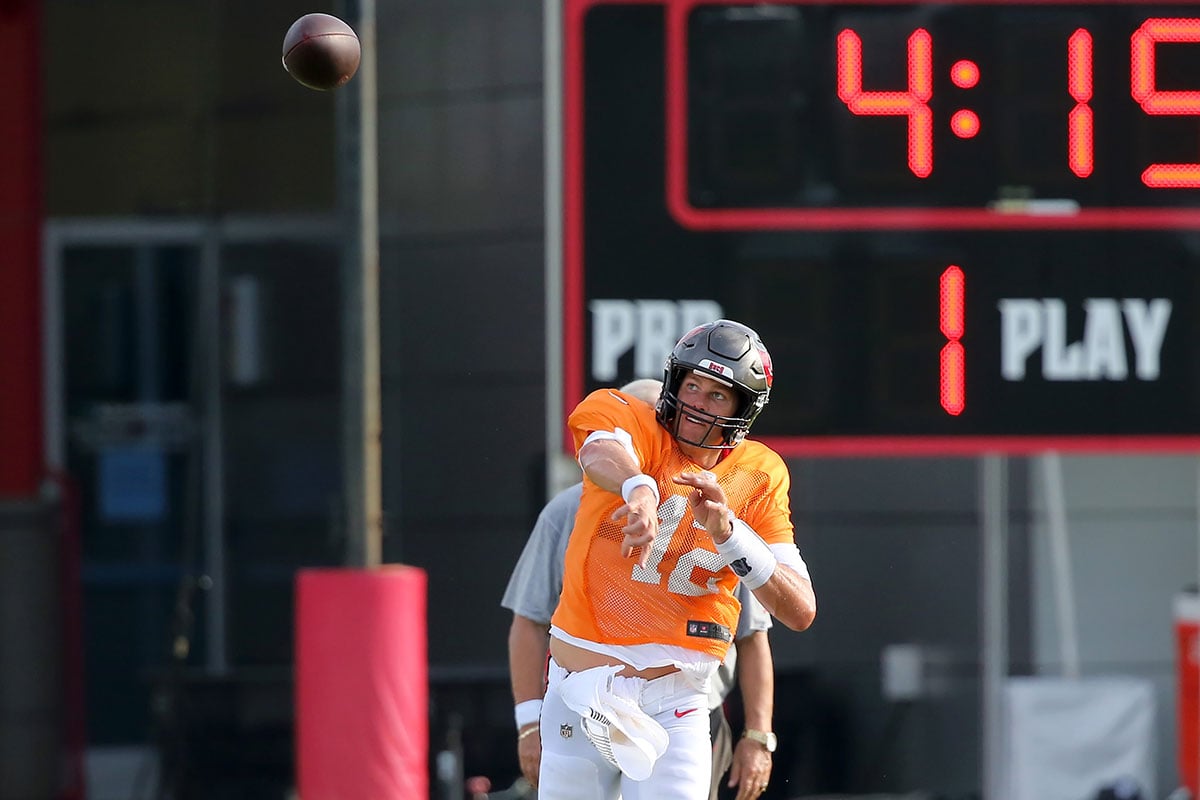 2021 Bucs Training Camp Coverage – Presented By The Rhino
The Rhino Has Your Gutters Covered!

The Rhino features an industry-leading 30-year warranty on its gutter guards. For more information visit TheRhino.com or to schedule your FREE, no obligation gutter inspection call (813) 590-5951.

The Tampa Bay Buccaneers hit the practice field in full pads early Monday morning at the AdventHealth Training Center under sunny skies and hot and humid conditions. The Bucs got a two-hour practice in just before thunderstorms rolled in around 11:00 a.m.

Tampa Bay’s special teams saw the first action with punt and punt return getting nearly half an hour of work to start practice. Bucs head coach Bruce Arians is concerned about the lack of time to work on special teams during the NFL’s truncated training camp time, which includes no preseason games this year due to COVID-19.

Wide receiver Justin Watson and rookie safety Antoine Winfield Jr. were getting looks as the personal protector on punts, which is a position of importance. Running back Dare Ogunbowale, who was last year’s special teams captain, served in that capacity in 2019.

Bucs wide receivers Mike Evans and Chris Godwin are the undisputed starters, but there is quite a battle for the No. 3 spot, which was vacated by the departure of Breshad Perriman in free agency. Miller and Watson are the most experienced returning starters, and both had a strong day in pads.

Miller got behind the defense and caught a touchdown bomb from new quarterback Tom Brady. The play covered 90 yards and Brady’s throw, which came off play-action, traveled about 50 yards in the air and was on the money. Miller, who might be the fastest receiver on the team, blew past the coverage and free safety Mike Edwards couldn’t get over top of the route fast enough. Brady and the starters took the vast majority of reps today, as the Bucs are in preparation mode for their opening day matchup in New Orleans. Brady’s accuracy is the thing that stands out from watching the past five years of Jameis Winston – and Ryan Fitzpatrick at times. The ball rarely hits the ground when the 21-year veteran is slinging it, and his presence in Tampa Bay recalls the days under Jon Gruden when experienced passers like Brad Johnson, Brian Griese and Jeff Garcia were under center. In those days, interceptions were rare and the Bucs offense ran efficiently.

That’s the best way to describe Brady at the helm – the Bucs offense runs efficiently, but not exactly perfectly. There were some errant throws to Miller and running back LeSean McCoy on screen passes where the kinks need to be worked out and timing needs to be perfected. And Brady almost had a deep ball to speedster Cyril Grayson intercepted by cornerback Carlton Davis, but the diving DB couldn’t haul in the ball and had to settle for a pass breakup.

#Bucs QB Tom Brady and the starting O getting a LOT of reps today. Ball gets out quick, too. Noticeable difference from last year in Tampa Bay.

One last note on Brady. The ball gets out of his hand incredibly fast. He knows where he wants to go with the ball and lets it rip. If there was one thing Jameis Winston was guilty of – outside of his interceptions – it was holding onto the ball too long.

Arians has made some adjustments to his offense with more quick, underneath throws in the passing game to play to Brady’s strengths. But there are still plenty of deep and intermediate shots off play-action, too. Even at age 43, Brady still has the arm strength to get the ball there.

Tight end Rob Gronkowski struggled a little bit with the humidity on Monday in his first day in full pads since the 2018 season, but both he and O.J. Howard looked great catching the ball underneath. The word is that Howard is very focused and determined to have a bounce back year in 2020.

While second-team tight ends Cameron Brate and Antony Auclair appear to be locks at number three and four on the depth chart, Tanner Hudson and Codey McElroy are battling, too. Hudson has added some needed size and muscle and made a couple of leaping, acrobatic catches during practice on Monday.

The interior defensive line spent a good portion of their individual period working on firing out of the chutes and staying low. Coach Kacy Rodgers was constantly reminding the players to stay low and be mindful of their pad level when engaging simulated offensive linemen. The line then spent time working on proper footwork techniques – stepping first with the playside foot then reaching the offensive linemen.

Veteran Ndamukong Suh, despite being an 11-year veteran, spent time asking his coach some questions on the drills and what he needed to work on. It was good to see Suh still trying to soak up as much knowledge as he could, even though with his experience, he could likely teach the drill.

Once the 11-on-11 session started, Mike Edwards and Jordan Whitehead were the starting safeties, but Winfield, the team’s second-round pick, and Andrew Adams saw time with the starting unit, too. All of the safeties spent time rotating between free and strong safety, as both safety spots are interchangeable in Todd Bowles’ defense. Winfield made an impressive play in coverage, punching the ball out of a receiver’s hands and then recovering it.

Arians told reporters on a conference call after practice that it’s only a matter of time before Winfield emerges as a starter.

The inside linebackers worked on a drill during the individual period where they took on two blockers, one at a time, then after shedding the second blocker they exploded through to a ball carrier, simulated by another linebacker. They didn’t tackle to the ground, but there was a lot of pops heard during the drill, with the most pop coming from Devin White being the aggressor.

Second-year outside linebacker Anthony Nelson has really worked on his body and added some needed muscle. Nelson, whom Arians praised on the post-practice conference call, looked like a college kid last year as a rookie and now looks like an NFL player. The same could be said of right guard Alex Cappa, who has spent the offseason really transforming his body in the weight room. Cappa worked extremely hard this spring and summer and it shows. He’s no longer the weak link of the offensive line.

That distinction will fall on rookie right tackle Tristan Wirfs for the time being. The Bucs’ first-round pick took all of the starting reps on Monday as the team threw him in the fire to see what he could do. Wirfs performed okay in run blocking drills, as expected, but struggled in pass protection, especially against Shaquil Barrett, who took one step outside and then zoomed inside to beat the rookie and get after Brady.

Click on the video to find out how The Rhino Gutter Guard can protect your home. For more information visit TheRhino.com or to schedule your FREE, no obligation gutter inspection call (813) 590-5951.

I hope Wirfs learning curve will be sped up going against our D-line everyday.

Good, Shaq schooling the rookie, class is in session. Happy to hear Cappa is taking his job seriously. If he can get up to Marpet’s level, we’ll have some O line. Ball out fast, not touching the ground, you have to love the sound of that. Could you imagine if Tom has one of his best seasons? We might be in for a real treat this year. No more holding your breath, closing your eyes, crossing your fingers everytime the QB drops back this year.

Winston’s big windup was a big contributor to why he was sacked so often. Few QBs have a quicker release than TB12.

FOOTBALL!!!
Thank God, something to read about besides COVID

FYI…ex Buc Gerald McCoy out for year suffering right quad tendon injury for Cowboys… this might be it for the big guy!

it’s only day one; but . . . you got to be pretty excited. There’s almost too many things to talk about here.

I would say Chapelle Russell beating out Cinchy is the biggest surprise.

I’d compare Chapelle to Justin Evans; Justin did good things, but there were flaws in his game that many wondered; the Bucs saw that they could work with him. I’m thinking they saw that they can coach up Chapelle.

Thank you Scott, you put me there on the sidelines watching what you were seeing.
Go Buc!

Thanks much , Scott. You are supplying info and insight that other sites are not able to.

Scott, you might ask Mark to assign someone to find out the target playing weight for all of the guys this year. The Buccaneers site is reluctant to do so. I’m sure they have their reasons. They post a number for each player and it never changes. Vita Vea has been listed as 347 pounds since first time he was listed for example.

Do the Bucs have great defense and exceptional special teams? We’re about to find out.

Brady hit Miller on a 50 yard dime? That can’t be? Brady is just a dink and dunk specialist, who’s old, can’t throw deep, and has no arm. Someone may want to verify this reporting And Brady is getting the ball out really quick? That also can’t be true. Jameis only got sacked 47 times last year because of our horrendous OLine. The same horrendous OLine that apparently will get Brady sacked left and right this year. Wait, you mean maybe it wasn’t the line? Just maybe, it was on our QB who couldn’t read a defense? Nooo. That can’t… Read more »