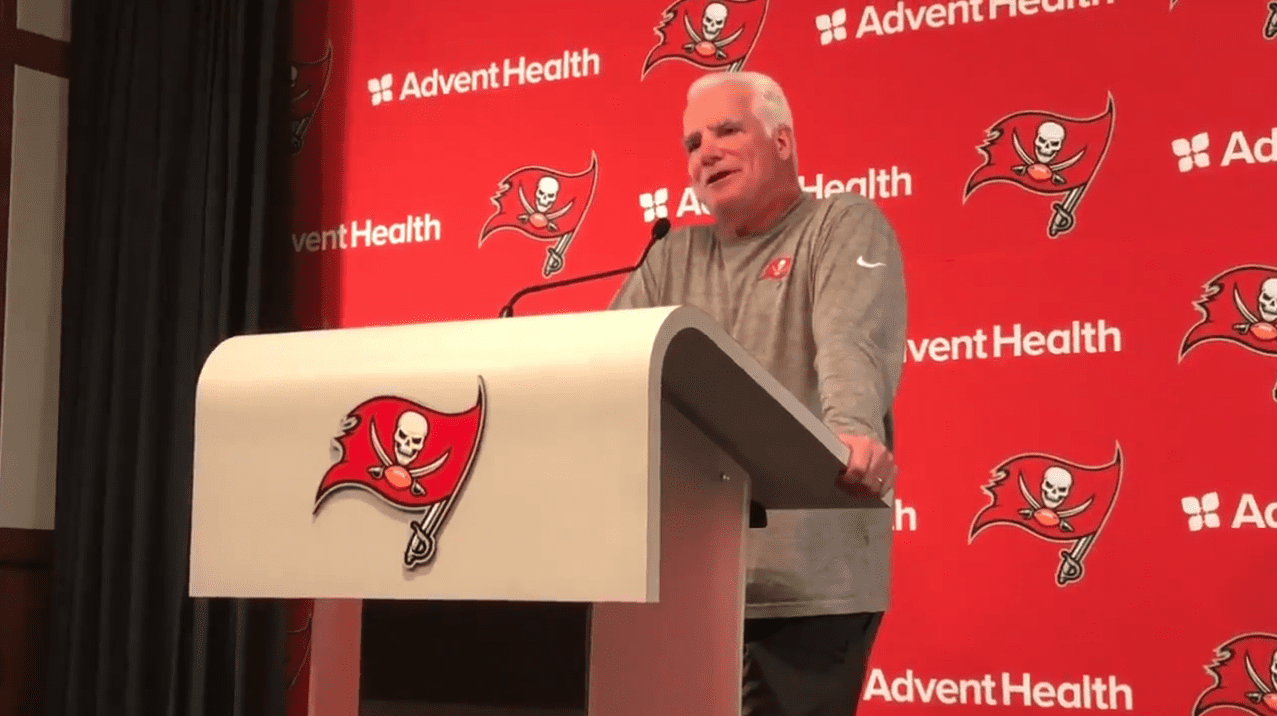 The weather may have kept the sun away, but it couldn’t keep us away from One Buc Place on Wednesday, as the Tampa Bay Buccaneers officially got back to their regularly scheduled work week after a week off and an extra practice on Monday.

Though the team is certainly coming off a low note after their 48-10 loss in Chicago two weeks ago, the mood around the building was a more pleasant one than you’d expect, and that was due to the announcement of offensive guard Ali Marpet’s contract extension earlier in the week.

#Bucs OG Ali Marpet was happy to get his deal done on Taco Tuesday pic.twitter.com/GjmTdZW0fJ

Marpet came to the podium on Wednesday to answer some questions on his new deal. Marpet isn’t a man of many words, but he said he was certainly glad to know the organization thinks highly of him and wants him around long-term.

#Bucs OG Ali Marpet was happy to get his deal done on Taco Tuesday pic.twitter.com/GjmTdZW0fJ

Marpet, who is an avid fan of tacos, also noted that his contract extension was signed on a Taco Tuesday, and that he, his family and his friends celebrated the best way they could — with tacos.

#Bucs OT Donovan Smith on what he plans to order at dinner now that Ali Marpet got his contract extension and it’s Marpet’s turn to pay for dinner: pic.twitter.com/kuVAVARchH

Back in the locker room, Donovan Smith, one of Marpet’s teammates on the line of scrimmage and a good friend of Marpet’s personally, said that he was certainly happy to hear of Marpet’s extension.

He said he plans to take about $3,000 of Marpet’s money and take Marpet shopping to finally buy some real clothes — his words, not ours.

#Bucs OT Donovan Smith was asked when he’s getting paid now that Marpet got paid: “You know better than me, bro. That’s on my agents. I’m here to play.” pic.twitter.com/KTQsfepeyd

Though Marpet’s deal came first, deal for the rest of the Bucs’ 2015 draft class have to be coming soon, and Smith is among those players.

Smith was asked when he thinks his extension is coming and he said he really doesn’t know; he’s just here to play ball and let his agents handle that.

#Bucs DE Jason Pierre-Paul on his mentality when he steps on the field: “No one can block me… that’s how I see it.” pic.twitter.com/iVIm2G8LiB

On the other side of the offensive line, Buccaneers defensive end Jason Pierre-Paul spoke the the media briefly on Wednesday. He talked about the mentality he has every week and every snap, saying that whenever he puts his helmet on and lines up against whatever offensive tackle he’s going up against, he thinks he can beat him.

JPP also said that the year is just four games old, and that there is a lot that can happen for this team between now and the end of the year.

And now, of course, the moment that many fans have been waiting for, the moment where defensive coordinator Mike Smith was called to stand up to the podium and repent for his sins — we’re kidding.

Smith did take to the podium on Wednesday, though, and certainly had many questions to answer. He said that the pass defense has certainly not been what it needs to be over the team’s last two games. Specifically, he was asked about benching Brent Grimes during the Chicago game.

He said that no starter likes to hear that they’re benched, but the decision was made to get Ryan Smith reps, knowing the game was out of their hands, at that point.

Smith was also asked what he thought of fans and media members calling for his job after a rough four weeks.

#Bucs DC Mike Smith on criticism from the media and fans pic.twitter.com/r4LDq0CrQx

His response was that he’s been in this business a long time, and that he’s used to it — you have to be as a head coach or coordinator. He said that, though fans think they’re hard on coaches, the coaches are even harder on themselves. He said that each coach is their biggest critic, and that when they fail, they don’t take it lightly.

Wait so hes his biggest critic but he cant see what we all see??

I literally just thought that to myself as well. If he knows his defense is performing poorly and he is the one who’s in charge of the defense you’d think it would have improved by now. Sigh wishful thinking.

If Mike Smith doesn’t take his own criticism lightly you’d think he’d CHANGE HIS GAMEPLAN AND SCHEME TO HIS PLAYERS STRENGTHS!!!!!! For the love of god I know I am not the only one who sits and observes how passive his defense is, and how little he BLITZES or even adjusts to get better!!! I actually got a headache from screaming at the TV the entire game when we played the Bears. My girlfriend watched the game with me and I literally said everything that was going to happen before it happened to our defense. Sigh I just don’t know… Read more »

Lol mike smith is a clown, 3 years of this struggling defense..this guy has no clue, just leave the bucs already.

Does anyone else think he looks like the grinch? Or is that just me

Not much else to say about Mike Smith lack of wisdom. Sounds just like Lovie Smith. No imagination, “stick to the plan”; I’m sure the other teams yet to play on our schedule appreciate it.

I listened to his presser, and it was the same old coach speak you’d expect. He made it sound like the Bears game was one of those days that happen from time to time. Unfortunately it’s not just a one game occurrence, but more of a complete failure of his defensive scheme. He was asked about blitzing saying it can work for you, or against you. Still not giving an explanation for not using one blitz against a young Q.B. in the first half. I’ve heard enough. Time will tell if he’s the man to get this defense to play… Read more »

Mike Smith called the Bears game an anomaly. I don’t want to pile on, but an anomaly is something that deviates from what is standard, normal, or expected. I think this happened in the first 3 games too, we simply outscored them in the first two. #icouldbewrong

It’s like our defense has become a Black Swan….I guess.

Is it really an anomaly. We’ve had at least 1 (actually 3) of those games each year, for the past 3 years.

An anomaly would be playing average on defense and not be leagues worst for once!

I think if I was so used to hearing loud cries for me to quit everywhere I went for like 20 years, I might consider a career change…but as long as some sucker kept paying me millions maybe I wouldn’t. Sad.

No need to trash Smith personally. I’ve met him, he’s a god guy. That said, what’s he’s doing’s not working. I’ve said in recent posts that if the D falls flat again vs. the Falcons, its time to make a change. Pretty much where I’m at.

I could understand Brees, Big Ben and even the Philly QB shredding us but Mitch Trubinsky. Good god. That was unacceptable. I can even handle it when we get outperformed physically by a more talented team, but accept for one player they aren’t. It reminded me of the Titans game under Schiano when they allowed thier rookie QB to get hot and then he shreded us. You simply can’t let a rookie QB or really any QB to get off to a hot start that builds the one key component, confidence, that fuels his game. Remember last year when we… Read more »

Unfortunately, we’ve become the pre-2017 Saints. We have a high powered offense but a defense that can’t stop anyone. The good news is that with time the rookies will get better, like the Saints D did in 2017. I can’t see the scheme working any better though, as it hasn’t in 3 years despite numerous personnel changes. I don’t want to see a coaching carousel this offseason so I hope Koetter can ignore his personal feelings and make the right business decision by cutting ties with Smitty. Sure, we don’t have any “top notch” options to replace him at the… Read more »

I’m surprised this article leaves out the quote by Mike Smith that Chicago’s game was an anomaly for our defense. That word right there shows where this guy’s head’s at. The REAL anomaly for this Bucs defense of the last three years was that 4-game stretch in 2016 where the defense was very good. THAT was the anomaly under Mike Smith. A game like Chicago happens once or twice each year and the defense has been ranked last place two years in the running. THAT’S STATUS QUO. Not anomaly. Mike Smith’s anomaly quote and press conference also indicates that Dirk… Read more »

“..the coaches are even harder on themselves.” So, I’m sure people had to keep sharp objects and firearms away from Smith after the Chicago game, right?

About the Defense. We made lots of changes. Added some great players yet we still suck. We are at the bottom in yards allowed per game and sacks. This despite having a healthy GMC and JPP; both playing very well. So what is wrong, where does the blame belong and how do we fix it? If you change players surely you went to better players and if you did not, then the blames is on the coaches because it is their job to evaluate talent. If the players are better and you did not change the scheme then you blame… Read more »

What great players? That’s the problem. They aren’t great players. They’re not even good players. They suck. They are cast offs that nobody wanted. Wake up. This team is garbage and they will get destroyed Sunday. Do you not think Matt Ryan knows how to carve up a Mike Smith defense? He faced it for years. The whole staff…..coaches, personnel dept up to Licht needs to be fired. Nothing will change until that happens.