Koetter: Got To Score Touchdowns In The Red Zone

Home » Articles » Koetter: Got To Score Touchdowns In The Red Zone 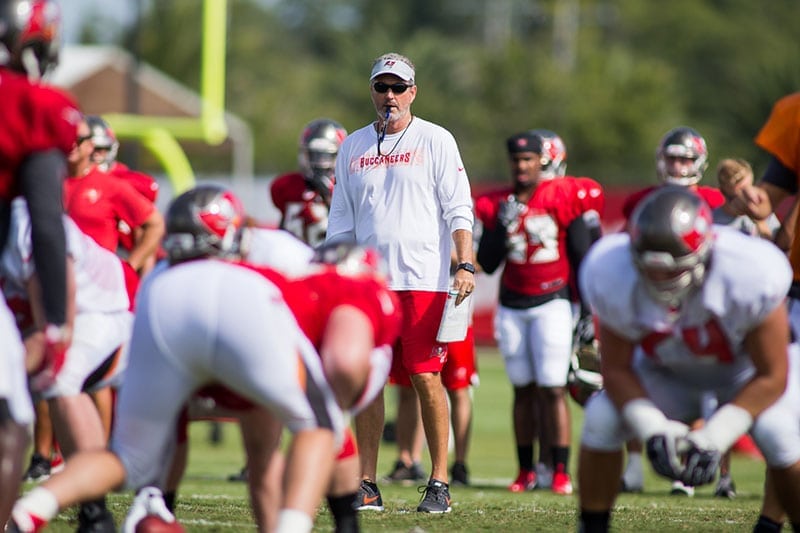 Koetter: Got To Score Touchdowns In The Red Zone

Home » Articles » Koetter: Got To Score Touchdowns In The Red Zone

(On Ryan Smith)
“Ryan, because of the guys we’ve added, is having to compete. Last year he might have gotten elevated a little faster than normal because of the depth, or lack-there-of, at that position. He’s in a stiff competition right now. Ryan’s working at it, he’s getting better and he’s just got to hang in there and keep improving.”

(On injuries)
“We had kind of a rough day yesterday, from an injury standpoint, and that’s one of the reasons we had to cut it back today. We have a game Thursday night and even though we have 90 players it seems like you always get hit at one spot and right now we’re just a little thin in the offensive line and that affects everybody else. We’ll see, there’s still a lot of guys up in the air for Thursday night. Obviously we’re not going to take any chances with any player for preseason game one.”

(On red zone offense)
“That’s well documented. We got down in the red zone plenty of times, we didn’t score enough touchdowns. You’ve got to score touchdowns in the red zone somewhere around 55% to 60% of your drives. We were under 50% and we’ve got to do better. Another thing is that we’re going against our defense, so you’re not game planning, you’re installing. Some things are going to look raggedy at times on both sides, some things are going to look good. We know we have to solve it, but we aren’t going to solve it in one practice.”

(On who won practice)
“It was a different kind of day. We had a lot less full speed periods today, so I wouldn’t score today.”

(On Ryan Jensen and the quarterback work)
“The quarterback thing is one piece of it. We can’t play the offensive line, the receivers, we’re not going to double their reps because of the quarterback situation. We’re going to stay on our progression and the quarterback situation is a separate issue that has to be worked out. We’re extremely concerned about it, but I don’t know for sure if he’ll work with more than one quarterback. He might, he might not. You never know exactly how many plays you’re going to get. Your first group typically plays 15 plays, which should take you through at least one quarter. The fact that Ryan is playing next to Ali is helping him a lot. I’m very pleased with how physical he’s playing, but as far as making all of the calls and working with the quarterbacks, that’s a process. It’s where it should be, it’s not behind or ahead.”

(On Ryan Fitzpatrick’s mobility)
“He’s got over 2,000 yards rushing in his career. We joke with the other quarterbacks about how far behind they are of those 2,000. Griffin is exactly 2,000 behind him, so he’s gaining one yard at a time. Fitz has always been a good runner. Part of being a good running quarterback is knowing when to pull it down and go straight ahead and not waste time going sideways. I think Fitz does a good job of that.”

“We’d prefer he didn’t get hit, and we can control it for the most part in practice. One of the points of emphasis this year is the new slide rule. A quarterback, to declare himself down, doesn’t have to go down feet first anymore, you could go headfirst, but one thing they’re going to really tighten up is where the first spot is. They’re not going to let you slide two or three yards. Fitz is going to have to take care of himself, that’s where he’s got to be smart.

(On rep count)
“We’ve got plenty of guys. This game, for us, is going to be more like prior year’s preseason game four, where you have 75. We’re going to be closer to that number. It’s plenty of guys, but it’s preseason game one. So, we don’t necessarily want Donovan Smith to play with the three’s because we don’t have any tackles left. That’s just… We have some issues at a couple of positions like that right now. Some positions are better than others but we’ll work them out. We’re going to go out there and compete our tails off on Thursday night. I’m excited on it.”

(On matchups for Miami)
“We haven’t even talked to the players about matchups yet. That’s something we’ll start tonight and continue up until Thursday night, but typically with preseason one, you don’t start talking about the game until the night before.”

(On injuries)
“It’s a little too early to say on that. Sometimes when we have guys get hurt, they can’t get MRI’s until the next day. We have some guys getting MRI’s later today, so I’m still waiting on some of the guys that got injured yesterday and we’ll just have to see.”