Koetter Says Bucs Have Made QB Decision For Next Week 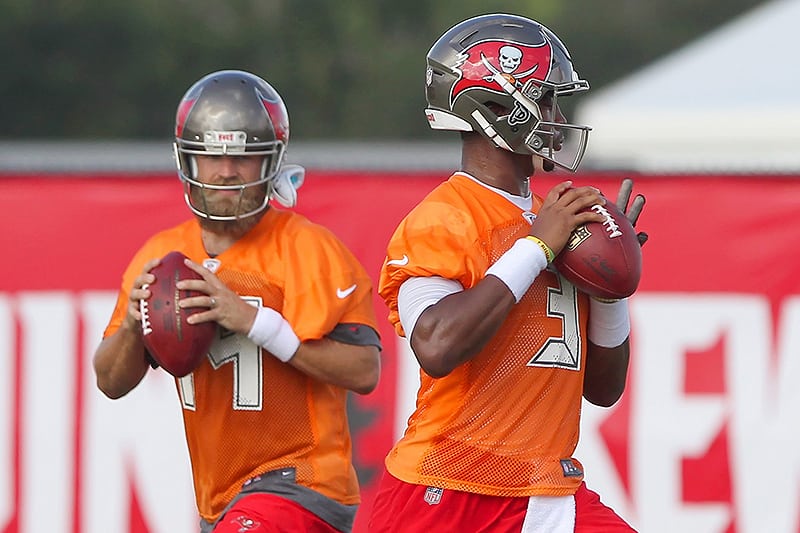 Koetter Says Bucs Have Made QB Decision For Next Week

The answer to the question of will it be Ryan Fitzpatrick or Jameis Winston starting against the Bears on Sunday has been made.

Unfortunately Bucs head coach Dirk Koetter has only shared the plan with his two quarterbacks, and chose not to divulge Sunday’s starter with the media on Tuesday afternoon at his day-after press conference.

“I know there’s a lot of interest in the quarterback thing, and I did talk to both Jameis and Fitz and it’s great to see Jameis back in the building,” Koetter said. “He was here early and working hard. We welcomed Jameis back and we’re glad to have him. It’s a short week and he assured me that he was ready to go and I don’t doubt for a minute that he’s been working hard. Koetter was also asked if he was concerned that the locker room would start choosing sides in the debate and also said having this problem isn’t really a problem.

“It’s possible, it’s possible,” Koetter said. “I worry about a lot of stuff but I also trust our guys. I trust our guys that they’ll know that we’re making the move that’s in the best interest of our team. I think that our guys just want to win and the second half last night was a good example of that. When you go in three touchdowns, three scores, at halftime… the fight was still there in our guys, even just in the locker room. I’m proud of the way they competed and came back. I think, no matter what the adversity is, our guys will try to fight through it.

Fitzpatrick’s first half(three interceptions, and a 30-10 deficit) seemed to answer the question on it’s own Monday night, but a second half near comeback kept things somewhat muddled. The former Harvard standout nearly led the Bucs to a wild comeback and finished the night with over 400 yards for the third straight week, something that has never been done in the history of the NFL.

During the three-week absence, Winston rallied together a number of former football players and had simulated practices and even games, something that Koetter knew about but wasn’t able to see.

“I wasn’t there so I don’t know, but knowing Jameis, the fact that he came up with that plan and put it into motion and recruited people to help,” Koetter said. “I mean, I’ve never seen that before but it really doesn’t surprise me, knowing Jameis like I know him. I actually wouldn’t mind seeing a film of it to see what it looked like because Jameis got his wish; he was the player and the coach at the same time.”

It’s a good strategic move not to announce who’s starting. My money is in fitz as it’s a short week and Jameis hasn’t seen any real game action in about a month. Itll depend on how fitz plays during the bears game for things going forward.

it’s a double edged sword really…on one hand you have Fitz who’s had his playing time and has done well, but he’s also coming off a rough game where he took some punishment. Then you have Jameis, who hasn’t had any game action, but comes in totally fresh with no “mileage” from the previous 3 games.

Go with fitz until he starts playing bad, and if he doesn’t play bad, we still have Jameis for another season. I really don’t see what’s hard about this decision, we’re playing good football with fitz right now.

Because what does benching jameis for a year do? It could ruin his confidence and it could ruin is trust with the team. He could think that dirk and Licht don’t believe in him. I personally don’t think that’s who he is but it is a possibility. Don’t sacrifice long term success for years just for one season where we probably wouldn’t make the super bowl. I love Fitz but you gotta think past this year too.

Winston is our franchise qb, but all I’m saying is that there’s no reason to rush him back in.

Fitz got the snot knocked out of him last night, he’ll still be sore come Sunday. You go with your franchise Q.B. when healthy, and available, that would be Jameis Winston.

Fitz gave up an interceptions under pressure when a ball was tipped at the line and when his was hit as he passed. Those are the kinds of turnovers Winston gives up. Winston is the future – barring another Uber ride. But, the two weeks after the Chicago game is the time for a head to head competition to see who can help the team win now.

I love the beards the fans were wearing. I love the positive effect the first two wins had. The postgame presser after the Eagles win was a classic that will live on forever. Here’s the thing though…Fitz has known all along he was on a 3 game stint. He was able to play lights out knowing that. The franchise QB and future of the franchise is still Winston. Winston has had 3 weeks to prepare for Chicago. It isn’t a short week for him, just everyone else. My money is on Winston starting and giving the Bears all they can… Read more »

That is a really good point regarding the short week being for the players that already played. Great thought. I still would start Fitz and have Jameis ready if Fitz is shaky. You will then get an energy boost by bringing Jameis in. My money is on that plan and they may actually be planning on playing both.
I am still excited about this Team!!
Go Bucs!

I am ready for either one of them and I agree with Coach. Our only problem is that we have 3 QB’s who could start on almost any team. That is a good problem to have.

I have no doubt we will see Winston starting at QB this season. My only concern is that we will keep seeing Mike Smith as the defensive coordinator. When we so blitz, its always the same tired old A gap blit and all the RB has to do is step up into the hole.
The Steelers were coming from every different direction last night. Sometimes they were using the D lineman to open up a hole for a blitzing LB, something we don’t seem capable of doing.

Is that really your only concern drdneast? It would be a relief if it was. Lol. The defense wasn’t the problem this week(obviously). It was a problem on offense. Specifically 4 turnovers. 3 ugly ones from Fitz and 1 from Godwin. Then came the drops from Godwin as Fitz stubbornly tried to help Godwin regain confidence. That lead to a pick 6 and two dropped TD’s that became a total of 3 points on one field goal. There’s your HUGE difference. Thats 18 points in differential. (-7-7-7+3=-18) Bucs will be fine and as soon as Winston smashes the Bears, we’ll… Read more »

We have two big concerns. One is our defensive scheme, Brent Grimes was playing way too far off the receiver, and Mike Smith takes zero blame for that, he always blames the corner. Saying well I dont know why they are playing that far off, I’m not telling them to. The second problem is, where is our running game? We have been great passing the first 3 weeks. But we have to establish a run game, are you really telling me Ronald Jones is so bad that he cannot crack the top 3 on this roster. Like come one now,… Read more »

If I was Koetter I would put one in for the first series and then go with my REAL pick from the 2nd series on just to mess with them. Next level mind-games!

Lol. That is some funny shit. Mind games!!

I’ve always thought, if you have two QB’s you have no QB. It’s the one position where one of them has to be “The Man”. Honest and immediate communication is the key here. The sooner the final plan is made and announced to the team the better, as players will then accept it. It helps that Jameis is so well-liked. Given the short week, it seems most logical that Fitz start Sunday against the Bears and their stout defense, but that Jameis possibly gets in a series or two. It will then be known to all that Jameis is the… Read more »

In a wild turn of events, I think Koetter has made all the right moves starting with allowing Monken to call the plays. It feels like he has figured out the Head Coaching role. Mike Smith and his defensive calls are still pretty poor and that is based upon crunch time when we knew Pittsburgh was going to run. Our young DB’s have done really well for rookies. Conte and Grimes were our weak points last week (Capt Obvious speaking). I think Fitz starts but Jameis gets in the game against Chicago. I don’tthink RoJo gets in due to the… Read more »