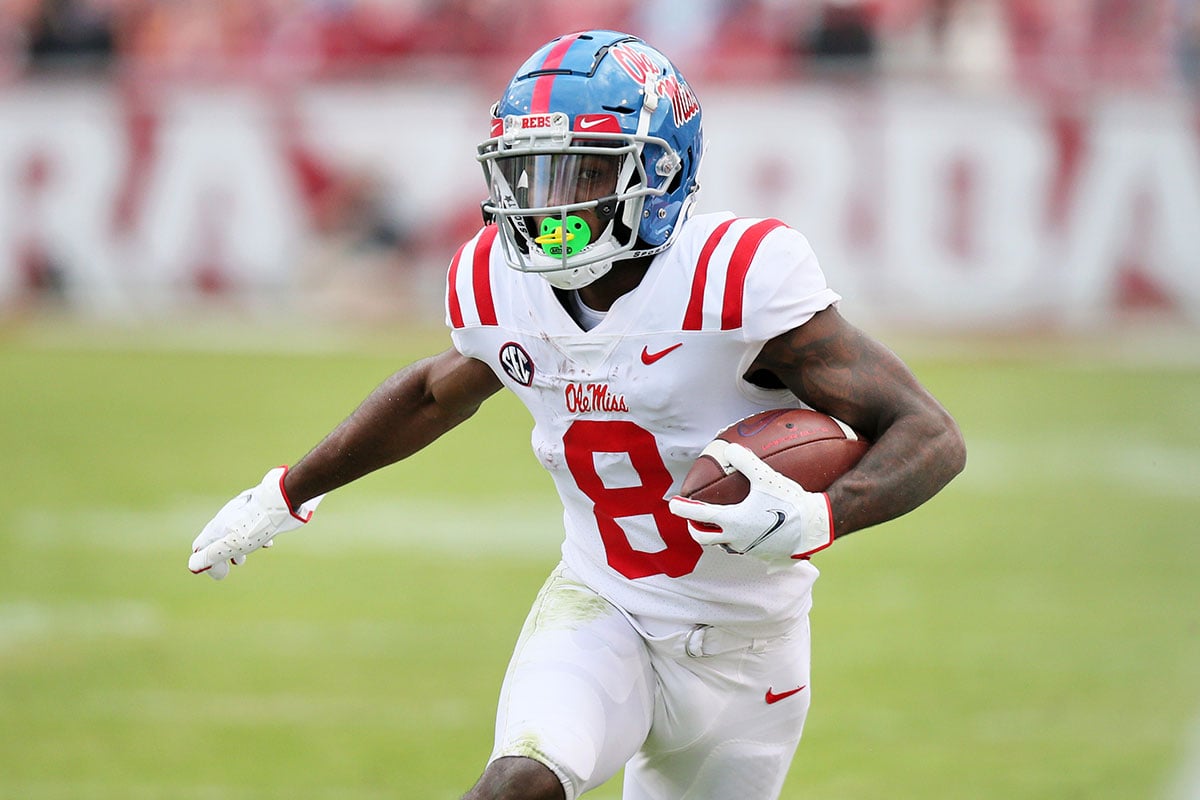 Most NFL Draft seasons I’ll have at least a top 200 big board for you by draft day, but I’ve got a little perfectionist in me, and it didn’t feel right to rank players out to 200 without having properly studied all the prospects that would have been included. The Bucs Super Bowl run and a truncated college football season meant a little bit of a late start for me on studying this class, but next year you can expect all of Pewter Report’s draft content to be ramped up to another level.

A couple things that are important to note about my grading process and my Top 150 Big Board so you don’t start your weekend overly triggered (maybe you still will):

• I model my grading scale after the approach of NFL teams, which means it is stingy. Most NFL teams have less first-round grades and smaller overall boards than those you see in the media. I’m not one of those analysts who will have 25 first-round grades and 40 second-round grades. The reality is that most players who attempt to make it in the NFL will not, and many that we project to be among the best at their position never get there. We all wish it wasn’t so, but that doesn’t stop it from being a reality.

Second-Round Grades – PURPLE – Prospects that I believe will range from very good-to-good starters in the NFL.

• My board does NOT account for positional value at all, other than obviously excluding kickers, punters and long snappers because I don’t know how to scout them. For example, I have five running backs with a second-round grade in this class, but I probably wouldn’t ever take a running back until later in the draft unless he was a Round 1-caliber, dynamic space player and receiver. So although a quarterback like Alabama’s Mac Jones may be further down this board than most, it just means I think he’ll be a good starter in the NFL (second round grade definition), not that I wouldn’t take him until Round 2 if I were an NFL team in need of a quarterback. A good starter at quarterback is obviously worth way more than a great starting running back. My Big Board just doesn’t account for positional value because I’m not an NFL team and I don’t need to stack my board like one. So read between the lines there.

Also, every year the majority of my grades fall in the third-fourth round range. It’s important to understand realities with these prospects, and that is that many of them range from “solid starters to backup/special teams” caliber players during the course of their careers. Very few venture into the “good-to-very good starter” territory, and even fewer into the “elite” territory, so it’s important to me to make sure my grades reflect that. I’m not into spraying and praying and giving half the class a first or second round grade.

Here’s my 2020 NFL Draft Big Board if you’re interested.

Remember, BLUE is for special prospects that I believe can consistently be among the top few players at their position in the NFL by year three. GREEN is for players I believe will be excellent, high-end starters. BLUE and GREEN combined represent the number of Round 1 grades on my board.

This year I ended up with 17 first round grades, four more than the year before. Many of those were late first round grades this year, but overall I like the top tier of this class more than I like the depth of it. Three great quarterback prospects certainly help, as do five premier offensive weapons and a couple of stud cornerbacks. A couple notes on the offensive linemen: some will be surprised to see Penei Sewell as the fourth offensive lineman on my board, but he’s my top offensive tackle in this class. Rashawn Slater and Teven Jenkins graded out a little bit higher as guards than Sewell did at tackle, so I have them higher on my board.

I still think both Slater and Jenkins can be stud tackles in the NFL, and I would definitely play them there as an NFL team given how much more valuable tackle is than guard, but their ceiling at tackle isn’t on Sewell’s level. Sewell has all the tools to be an excellent starting tackle so I’m betting on his upside, even if year 1 could be a little rough. I feel similarly about Zach Wilson, and Micah Parsons to a degree as well.

Ole Miss WR Elijah Moore with a first round grade? Yes. Moore is dynamic and wins in every way I want a wide receiver to win, regardless of his size.

Notre Dame’s Jeremiah Owusu-Koramoah as a safety? While at Notre Dame, JOK played in the slot and as an overhang defender at 215 pounds, making it difficult to evaluate him as an off-ball linebacker. I would play him at strong safety, but he may be able to put on weight (he was 221 at his pro day) and learn stack linebacker, where I could also see him excelling. He’s a great football player, it’s just important to know what he can learn if you select him in the NFL Draft.

27 second round grades, with Landon Dickerson, Trey Lance and Greg Newman just missing out on Round 1 grades. Remember, that means I think Lance will be a very good starter in the NFL. At quarterback, if you’re an NFL team, you take a very good starter in the top 10 of the NFL Draft every single time. Accuracy issues pushed him down a little bit for me, but he has basically everything else I want in a franchise quarterback, and there’s ample reason to expect further growth.

A couple surprises in my second round grades: EDGE Payton Turner at No. 34, LB Derrick Barnes at No. 38 and C Quinn Meinerz at No. 41. Those are guys I’ll stand on the table for, among others.

Thanks for sharing Jon, very insightful! I am very excited for the draft.
In case anyone cares, I prepared my own top70 big board. I most likely did not spend as much time on mine as Jon did, but still looked at All-22 tape from the vast majority on my board, thus am not only influenced by YouTube highlights ;)

Good for you! I’ve never done a big board, always just positional rankings with an internal knowledge of how I’d rank most players relative to others.

A big board with all position groups is a bit inaccurate because I didn’t nearly spend an equal amount of time scouting all positions. My film study on LBs WRs, QBs and Safteys was limited to be honest, but I watched quite a lot of OL, DL, Edge and Corner. But I do always like to do the Big Board as a visual reference.
What are your positional rankings? Maybe you can put some of these guys on the draftnetwork bigboard creater too, I would be curious to see your take on guys.

So Tryon is No.59 on the board and you guys have him going at 32? I think Jason Licht is a better GM than that lol

That’s the first thing that caught my eye. I saw Toney with a third round grade too, yet every mock I see has him in the top 20. This is suspect at best….

It’s suspect because it varies from the draft media consensus? That’s an interesting conclusion, lol. What value would an overarching opinion on the draft be if it just conformed to every cookie cutter opinion you’ve already seen? Anyone whoa actually does an honest, informed dive on prospects is going to come away liking some players more than most do and disliking others more than most do.

It’s like real estate…..they are worth what somebody is willing to pay regardless of value to others.

ESPN has Tryon at # 37 overall

I think that’s too high myself. I’m more in-line with Ledyard’s ranking than with that one. I’d be happy with Tryon at 64, but even there, I wouldn’t be crazy excited about him. Him at 32 has started to become my worst case likely scenario for this draft. I REALLY hope we don’t take him. Which isn’t to say that I’m right. The last first rounder I really wanted us to avoid to this extent was Vita. I actually posted on social media hours before that draft that above all else, I just didn’t want to take him. Then again,… Read more »

Thanks John for the analysis. I have no clue who Bucs will pick. I am having enough issue with the concept of “need” versus “want”. If I am the Bucs, I wouldn’t trade up; maybe down, but I doubt there would be takers. If it’s not a QB want/need, then it’s BPA; as to who that would be, good luck. Go Bucs! Keep the dream alive.