Licht, Koetter: Bucs Not Forgetting About Brate With Howard Selection 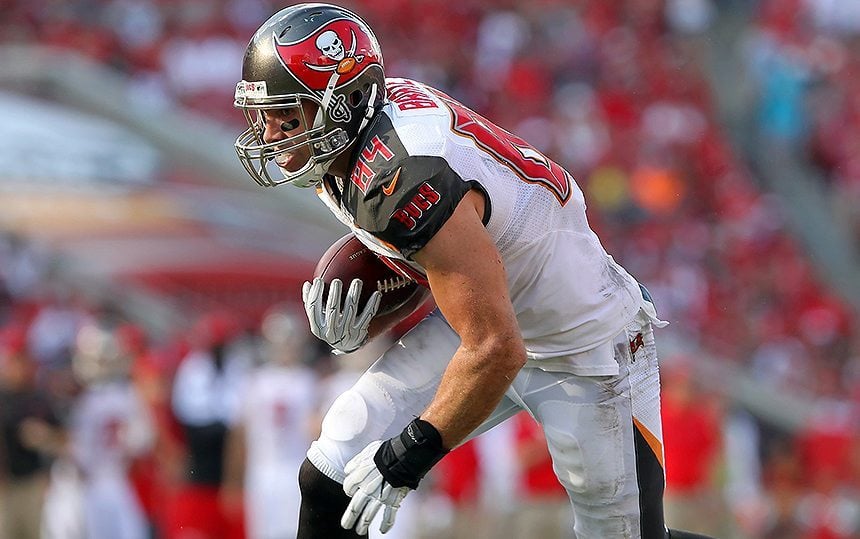 Licht, Koetter: Bucs Not Forgetting About Brate With Howard Selection

General Manager Jason Licht told the media what franchise quarterback Jameis Winston thought about the move shortly after the decision. “I got a text from him with about a million smiley faces, so I know he’s happy,” Licht said.

The 6-foot-6, 242-pound versatile tight end provides Winston with a big downfield target that can also divert defenses’ attention away from outside weapons Mike Evans and DeSean Jackson.

In addition to having solid hands and 4.5-second speed, Howard receives high marks for his ability to stay on the line as a blocker. Whoever ends up taking the majority of Winston’s handoffs this year will benefit from Howard’s big body taking on edge rushers.

But what about the other guys in the tight end room Howard’s set to join? Notably starter Cameron Brate?

In back-to-back press conferences with the media Thursday, Licht and head coach Dirk Koetter said they’re excited to get to work plugging Howard into the offense along with Brate as opposed to phasing out some of the third-year pro’s usage.

“We love Cameron,” Licht said. “Cameron is a heck of a player. In our offense and a lot of offenses in today’s day and age, you have two tight ends: one ‘Y,’ one ‘F.’ If you can establish that, then it really – you can dictate what you’re doing with the run and passing game. That’s one reason, or main reason, why Dirk and our offensive staff right now are probably doing cartwheels up there.”

Brate continued to prove he can hang as a capable NFL pass catcher last season, tying for the league-lead in touchdowns with 8 and securing 57 balls for 660 yards. Pass protection and run blocking, however, continue to be works in progress for the Harvard grad.

The Bucs still have blocking tight end Luke Stocker on roster but chose not to re-sign Brandon Myers. Koetter mentioned how Howard’s addition could better Tampa Bay’s ability to keep defenses guessing in two tight end sets with the rookie and Brate on the field together.

“I think on first and second down, especially, most teams would prefer to be in a two tight end set or one tight end and a fullback – what we call 12 personnel – and Cam is an excellent pass-catching tight end,” Koetter said. “I actually talked to Cam right after the pick, had a phone conversation with him, and I think this will help Cam.

“But a lot of these ‘F’ tight ends or these tight ends that are not quite as good a blocker at the point of attack makes it tougher to run the ball and that’s where O.J., especially coming out of the program he did – he’s a winner, he’s a great kid, and he can do everything we need a tight end to do.”

Can you say Patriots!