Marpet May Be On The Move, And Other Bucs’ O-Line News

Home » Articles » Marpet May Be On The Move, And Other Bucs’ O-Line News Marpet May Be On The Move, And Other Bucs’ O-Line News

Home » Articles » Marpet May Be On The Move, And Other Bucs’ O-Line News

Last year at the Senior Bowl, PewterReport.com broke the news that Tampa Bay would be moving Ali Marpet from right guard to center for the 2017 season.

This year at the Senior Bowl, Marpet might be on the move again – back to guard.

In a conversation with PewterReport.com at Ladd-Peebles Stadium in Mobile, Ala., Bucs general manager Jason Licht discussed the future of Marpet and Tampa Bay’s offensive line.

It’s still early and the Bucs’ roster for 2018 isn’t even close to being set, but the Buccaneers are considering any move to get the five best offensive linemen on the field together. One thing is for certain regarding Marpet, he will be starting at either guard or center along with offensive tackles Donovan Smith and Demar Dotson.

But, whether Marpet will be lining up at center or guard will be determined by what the team does during free agency and the draft. If Tampa Bay decides to sign a free agent center like Baltimore’s Ryan Jensen or draft a center like Ohio State’s Billy Price, LSU’s Will Clapp or Arkansas’ Frank Ragnow, Marpet would move back to guard.

But, if the Bucs sign a free agent guard like Andrew Norwell or spend a premium pick on a guard like Notre Dame’s Quenton Nelson, there’s a strong chance that Marpet remains at center. 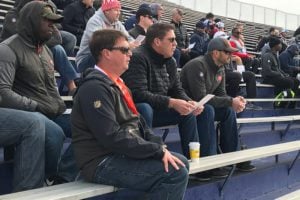 “As of right now I would say he’s our center, but we will always put our best five out there,” Licht said. “We were happy with his play towards the end of the season before Ali went on IR. Ali is a really, really smart guy, as we all know, but it’s an experience thing when it comes to directing traffic, making the calls, seeing different alignments and fronts and different blitzes and stunts and all those things. It comes with experience and at the end, he was really starting to get that and take a leadership role, which is what the great centers do.

“With that said, we will put our best five out there whatever the combination is. Whether we bring in guys through the draft or free agency, it’s going to be the best five.”

The Bucs are having internal discussions about whether to let both players that platooned at left guard last year, Kevin Pamphile and Evan Smith, go in free agency or make an offer to keep one or both of them. Tampa Bay is also considering playing offensive tackle Caleb Benenoch, who is entering his third year with the team, at guard as he did as a rookie to help solidify the interior of the offensive line. Benenoch graded out as one of the Bucs’ best run-blockers last year, and with Tampa Bay’s running game ranking 27th last year, averaging just 90.6 yards per game, there could be a push within the organization to get him on the field in 2018.

At right guard, J.R. Sweezy has been a disappointment for two years in Tampa Bay. Sweezy signed a five-year deal worth $32.5 million in 2016 and missed that season due to a back injury that required surgery. Sweezy’s contract got reworked last year as he returned to action, but he certainly wasn’t the player the Bucs thought they were getting from his play in Seattle in 2015. The big question will be whether Sweezy’s sub-par performance in 2017 was just him getting used to football again after being out for the 2016 campaign, or if he’ll never return to the form he displayed in 2015 due to the ramifications of his back surgery.

“J.R. is coming off an injury and he’s going to need some time to heal,” Licht said. “We’ll have to see how that rehab goes and where he is at that point. He hurt his leg at the end of the season. We love J.R.’s mentality. He’s one of our toughest guys and that’s the kind of guy that we want to fill our locker room with. We’ll have to see how it goes with him. It’s just a physical thing with him.”

Despite being in line to make $5.25 million in base salary in 2018, Sweezy will remain a Buccaneer, but his starting job does not appear to be guaranteed.

I’m all in on the Bucs trying to sign Norwell from the Panthers. He is one of the best guards in the NFL.

That’s not to big of a price tag to keep him for another year, and have him compete with whoever for a starting job. We kept Evan Smith last year, and although not great, he did provide needed depth. Last thing this team needs is giving players starting jobs without having to earn them, and then having no serviceable back ups ready when injuries happen.

Sweezy was a below average player last year and with a back injury that kept him out of the game for an entire year and resulted in surgery I’m not sure I understand what the hope is in keeping him for 5.875 million. You don’t think the Bucs could sign a better or younger player for the same 5.875 million Sweezy is poised to get? For the record, Scott, possibly intentionally is ignoring the fact that Sweezy also has a 625k roster bonus due as well in 2018 making his salary much closer to 6 million than 5 next year.… Read more »

You keep a guy like Sweezy or Smith aboard right now specifically because you have that option. Why would you release them when you have 0 alternatives right now? Go through FA and the draft, then see what you have.

It’s not like the Bucs are digging for cap space right now. Let’s see what happens before making snap calls. Same with every other player on the roster.

Why not keep Marpet at Center for continuity with #3? This whole idea of best 5 on the line regardless of position shouldn’t count for the Center position. Calling out protections and “quarterbacking the line” can’t be understated. Additionally, when Marpet was drafted, the talk was that he would eventually transition to Center for the long term. Stand by that.

Moving Marpet back to his natural guard position is a good idea… Then, trading down and drafting C Billy Price & De’ron Payne wouldn’t be a bad idea.

Carolina has 22mil in cap space and no free agent to compete with OG Andrew Norwell for it. Short of the money to spend and the franchise tag, Norwell is not getting out of Carolina. I’m trading down in my next mock assuming DE Chubb is gone taking either DT Vita Vea or Taven Byran and picking up a 2nd. I’m picking left OG Will Hernandez/Texas-El Paso and CB Mike Hughes/UCF. Philosophy is 1st three picks gotta start. I’m taking a Center in the 5th round either Scott Quessenberry or Bradley Bozeman. Bam! O-Line fixed. I’m still making this stuff… Read more »

Just taking a guess at who might be willing to trade up Jon. I have no idea if CB Jackson or FS James will be on the board at #15. Just too early to make too much sense of anything. Hope you have luck with your preferred players though. Go Bucs!

Nice to see you’re still with us JonnyG. I feared you had become a full time Cardinals fan. Now they suck again too. Welcome back.

I always support the home team win or lose so yes I am a Cards Fan cause that’s where I call home I still like the Bucs as Tampa will always be my second home as I grew up there. As far as the Cards suck again we will see Scu

unless a guy is a turd or on the brink of locking in guaranteed money, they should not cut a soul until they know they have an equal or better contributor. Can’t just assume you’ll land an upgrade, that assumption has killed many a season for position groups on this team in the past

IMO the Bucs need to stop moving Marpet back and forth. The Bucs did the same thing with J. Zuttah they traded him to the Ravens and he played Center and went to the playoffs and maybe the SB.

Have the Bucs ever tested D Smith out at his true RT position in the NFL?? I hate it when teams just try and move guys all around and put them in uncomfortable positions!! It’s not so bad at G or C because the play can always go to either side of you and there is less room to go around, but at OT, I think it makes a big difference! You have to use the complete opposite footwork on either side of the line, different foot for the kick-step and different plant foot to hold off the bull rush.… Read more »

I’m missing why everyone keeps looking for Sweezy to return to some previous, high level form. He was not that good in Seattle, and if he was, then he wouldn’t have hit free agency.
For being an OL guru, I’ve been very underwhelmed with the offensive lines that Licht’s built since coming to Tampa. Can anyone tell me what the plan was last year.. rotating guards?? Moving your best Guard to Center? Banking on an oft-injured JR to be dominant or even dependable??