Most Impressive: Eagles vs. Bucs 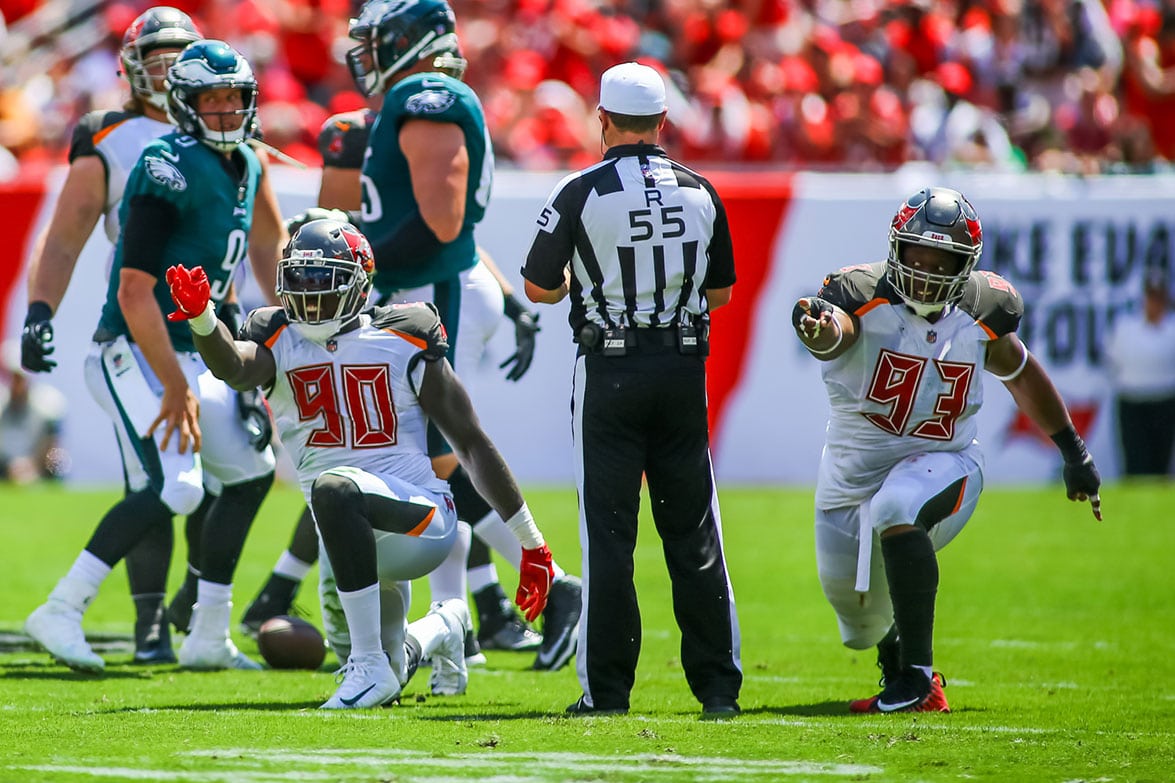 Most Impressive: Eagles vs. Bucs

The buzz is building through the Tampa Bay area, and rightfully so, after the Bucs held off the Eagles for a 27-21 win and a 2-0 start to the season.

Below is our weekly list of Most Impressive players against Philadelphia. Take a look and see if you agree and add yours to the comment section.

QB Ryan Fitzpatrick
Fitzmagic was alive and well inside Raymond James on Sunday as the Bucs moved to 2-0 after hanging on to beat the Eagles. Fitzpatrick was precise in his throws, confident in his decisions, and once again cool, calm and collected throughout the game. He finished with 402 yards on 27-of-33 passing with four touchdowns and an interception that wasn’t his fault. WR DeSean Jackson
There is something about players going up against their former teams. Jackson became a star in the NFL playing for the Eagles, but left to go to the Redskins before joining the Bucs. So their was motivation to have a good game, and good game he had. Jackson took the opening pass 75 yards from Ryan Fitzpatrick to the end zone to put the Bucs up 7-0. Jackson also caught a pass for a first first down as the Bucs almost ran out the clock to end the game and ended up with four receptions for 129 yards and the one score. And this coming from a player who we weren’t even sure would be active following a concussion last week against the Saints.

LB Kwon Alexander
Energy. Lots of energy. And sometimes that energy gets the best of Alexander who can over run a play or try for a knockout blow instead of a wrap up tackle. Still, as coaches will tell you, you would rather had to say “Woah” than “Giddy up.” You never have to tell Alexander “Woah.” On Sunday, Alexander was full of “giddy up,” sacking Eagles quarterback Nick Foles, while also forcing him to fumble. Alexander added seven tackles, with three behind the line of scrimmage.

Bucs secondary
At one point late in the game the Bucs secondary consisted of Ryan Smith, Carlton Davis, M.J. Stewart, Jordan Whitehead and Isaiah Johnson in the secondary. And while they gave up a couple late touchdowns, all in all, the young Bucs bounced back nicely from the debacle in New Orleans. It was night and day really, particularly for Davis who really struggled against the Saints. Smith, who had two tremendous tackles on punt coverage, also looked like a completely different player than we saw last season which really bodes well for the Bucs defense moving forward.

DE Jason Pierre-Paul
Like Jackson, there was some question if Pierre-Paul would even play this week after a knee injury limited him in practice this week. While he didn’t take over the game, he provided a key sack, to go along with five tackles on a hot, muggy September afternoon.

Mark Cook currently is the director of editorial content and Bucs beat writer and has written for PewterReport.com since 2011. Cook has followed the Buccaneers since 1977 when he first began watching football with his Dad and is fond of the 1979 Bucs team that came within 10 points of going to a Super Bowl. His favorite Bucs game is still the 1979 divisional playoff win 24-17 over the Eagles. In his spare time Cook enjoys playing guitar, fishing, the beach and family time.Cook is a native of Pinecrest in Eastern Hillsborough County and has written for numerous publications including the Tampa Tribune, In the Field and Ya'll Magazine. Cook can be reached at [email protected]
Subscribe
Login
Please login to comment
32 Comments
Oldest
Newest
Inline Feedbacks
View all comments

JPP also had 4 QB pressures or hits. He was all over Foles today.

2-0. Great bounceback game for the defense.

Mark, this had to be the easiest most impressive list you have had to put on pewter report and Fitz has that magic with Desean that we didn’t have last year which opens up everything and overall the Defense did a good job for the amount of time they were on the field. I would not trade two (2) 1-play 75 yard TD’s for a long boring drive anytime. The earlier comment about who is going to start in week 4 was just answered, stick with the hot hand.

Ryan Smith deserves his own spot, I think he played the best game of his career today, he was great out there today.

Completely agree – Smith was the standout for me in the secondary and I didn’t particularly think the rest played that great.

Ryan Smith deserves to be on here.

Talk your stupid crap about how JPP sucks now Bucassboob. You moron.

Ryan Smith has struggled as rookie but he was fantastic on special teams today. Great job!

My eyes must be deceiving me. I just looked up ESPN’S Total QBR rankings …an lo and behold, Ryan Fitzpatric stands in first place in the league! And that is after outplaying two defending division champion teams, one QB’d by the defending Super Bowl MVP, the other led by a sure first ballot Hall of Famer who happens to be in second place in the Total QBR rankings. After last week’s game, it became thinkable, at least for a few of us, that Fitz might just hang on to the starter’s job – though way too many PR commenters here… Read more »

Besides all the quarterback excitement (and the fantastic jobs performed by DSJ, Howard, Evans, and Godwin … and pass protection that has been superlative), the defense played sigificantly better today. Not lights out, but respectably well. That is progress.

I don’t think the defense played significantly better, they just didn’t play Drew Brees. That said, I thought they held up well and put some pressure on the QB.

Love the win, the defense is getting more comfortable each week but we really need to start getting our running game going!! Love the Bucs!!

Where’s the board’s hater right now? Bob, you there? Anyone? I can’t hear you over the sound of the cannons firing!

Great list except….. Come on now… The whole O-Line deserves to be on here. There’s no FitzMagic without our Amazing O-Line. GO BUCS!!!

As I said in the game recap story, Ryan Smith deserves a game ball.

So true Winston MVP, overall, Eagles may have the best D line in football.

What heart and determination shown by our team on the hottest of Field’s all afternoon. The mixture of our veterans with Super Bowl experience with our very young talented rookies and Ryan Smith blossoming into an experienced CB alongside his Special Team expertise, and our Fitzmagic miracle top NFL QB and outstanding OL protecting him with the fervor of Jensen was so wonderful to see today! Hey and Smitty actually called some good blitzes and a twist that got McCoy a great sack today too. Great!!!!

I love Jackson making a massive comeback. I remember when there were those who were saying we should cut him. Two of our best players are ” Old Guys”.

I was thinking we should let DJ go after this season so Godwin could start but he keeps playing like this we may need to find other ways to save cap money. I hate to say it but maybe trade Brate. We cant afford to resign Winston, Smith, and Marpet while keeping our current roster.

It doesn’t make sense to compare Wentz’s comeback to Jameis’s because Foles isn’t playing like Fitzmagic and the Superbowl was last year. If Foles was doing what Fitz is doing, and the Eagles offense was humming, there’s no way anyone would be talking about Wentz returning to take Foles’ position right away. But the Eagles offense isn’t clicking, and Foles sure isn’t looking like the Superbowl MVP. So sure, they are looking forward to Wentz’s return to change the path the Eagles are on. Do you think the Bucs feel like they need to change the path they are on?… Read more »

Interesting to me that two offensive linemen were on the Most Disappointing List. Yet for the past two weeks Fitz has had a much cleaner pocket from which to throw than we’ve seen in a while. That to me has been Most Impressive.

I like the tenacity that Whitehead plays with, he will make some rookie errors. But I think he needs to replace Conte in the lineup right away. Great win, bring on the Steelers, who clearly have struggled thus far in the season.

I wouldn’t replace Conte with Whitehead yet. I WOULD however give Whitehead more playing time. Then, if he
Continues to progress, (as I believe he will) I would look to have him ready to start after the bye week.

I would like to speak as a football fan, not a hometown Buccaneer fan. Unbiasedly, I believe that the Tampa Bay Buccaneers have the BEST overall receiving corp and TE corp in the NFL. How could they not? Yes Ryan Fitzpatrick has thrown for over 8oo yards in the first 2 games, but let me put the spin this way as well! The Tampa Bay Buccaneers receivers have logged over 800 yards in just 2 games! See what I did there? Fitz Magic doesn’t happen without: Evans, D. Jackson, Godwin, Humphries, Watson, and Martino. Then you throw in O.J. Howard,… Read more »

I would say they are top 3. The Chiefs have Hill, Sammy Watkins, and Kelsie to go along with their great receiving backs Hunt and Ware. Mahomes had thrown 10 TDs in the last 2 weeks. Hill is the best WR in the league and Kelsie is arguably the best if not hes the 2nd best TE in the leaue. Would lobe to see them match up in the superbowl.

and Mahomes is no rookie. This is his 2nd year but first year starting.

Understandable, you have valid points. I still give the edge to the Bucs receiving group. Hill and an off and on again Sammy Watkins, is no match to Evans, Jackson, Godwin and Humphries. Then you are correct about Kelce being great, however that’s all they have at TE, we have OJ Howard and Brate and Cross, as a unit, they are better than Kelce, IMO. As far as Mahomes, yes, first year starter, not a true “Rookie”, but I have always looked at that as a rookie season primarily as there has not been any real game action until this… Read more »

Watkins is a big name for some reason, but he is not a great WR. When is the last time he played well for a whole season?? Hill and Kelcie, however, are both awesome. But that is only 1 WR and 1 TE. I agree that our “group” is better. The Chiefs have nowhere near the talent of Jackson, Godwin, Humphries, Howard/Brate and Cross.

Watkins has never had to be the #2 WR. He has always had to carry the load. He is great and with out having to do everything by himself he will be great all season with the chiefs. The Chiefs also have their Humphries in Wilson and their backs a great at catching out of the back field. Their fullback Sherman catches better than our RBs. You do realize they have 10 receiving TDs to 7 different players through 2 games.

Ryan Smith and Justin Evans should have both been on the list.