No Competition At Backup QB For Bucs?

Home » Articles » No Competition At Backup QB For Bucs? 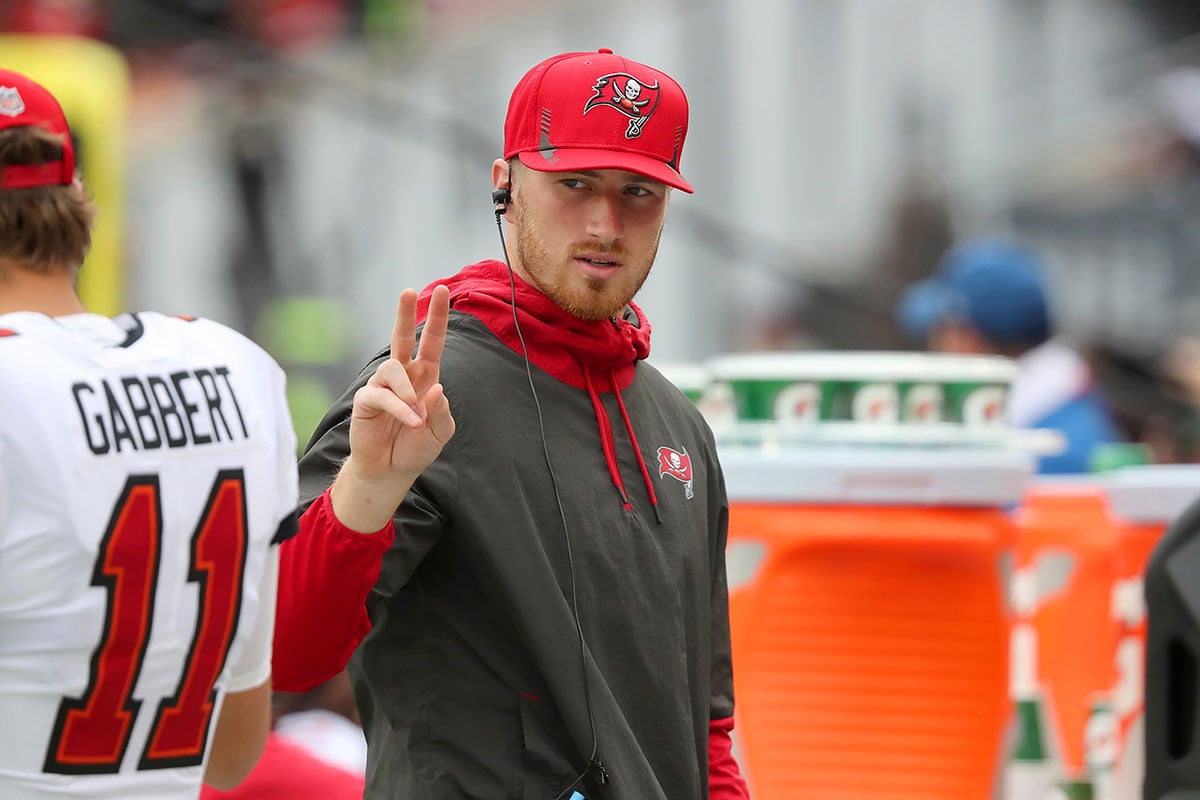 No Competition At Backup QB For Bucs?

Home » Articles » No Competition At Backup QB For Bucs?

Will Kyle Trask beat out Blaine Gabbert for the Bucs’ backup QB job behind Tom Brady? That was supposed to be one of the more anticipated training camp battles this year.

But it looks like that battle is over even before it began. 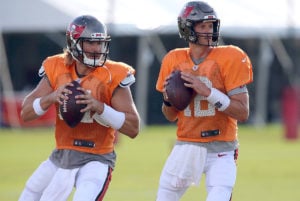 The reason? Trask’s “slow, steady development” as he enters his second year in Tampa Bay.

And the fact that Gabbert, who has been Brady’s backup the last two seasons, has four years worth of experience in the Bucs offense.

After investing a second round pick in Trask in 2021, many wanted to see him supplant Gabbert as the team’s No. 2 quarterback. According to Bucs quarterbacks coach Clyde Christensen the odds are stacked against that happening.

“I think it’s more of a learning year,” Christensen said regarding Trask. “I don’t see him competing with Gabbert this year. Although you know, he can do it it’s just all the odds are stacked against you. You can’t rep everybody. It’s hard enough to get Gabbert enough reps. We’ll prepare Gabbert as the number two. There’s always competition. There’s always someone looking for you job, but I don’t see that being an either/or. I see Gabbert as being the backup and Kyle being the developmental guy. And we’ll rep them that way.

“He needs another year. He’s always kind of been that slow, steady developer, right? In high school, in college and I think this follows in line with exactly that. … He’s not the guy that just comes in and just flashes immediately. He has a methodical development to him.”

Not A Knock On Trask

While fans may be upset about spending such prime draft capital on a player that will be No. 3 on the depth chart, it’s not a knock on Trask. Trask will have his shot to compete for playing time in the future and will just need to show the same patience he displayed in high school and college to see it play out.

“He knows his time is coming,” Christensen said. “He knows what the plan is, and he knows he’s going to get his crack. Now he has to make sure he’s ready for his crack. Because it’s no layup, it’s no gimmie that you’re the heir apparent. That’s and earned position and he’ll have to prove that he can do it.”

The Bucs plan to use the OTAs to get a long extended evaluation of Trask, who will get the majority of reps over the next month.

Leftwich Needs To See It, Too

While Christensen was more definitive in his answer, Bucs offensive coordinator Byron Leftwich seems to have a more open mind. Trask has been doing all the right things behind the scenes, but has yet to have it translate on the field due to the very limited reps he got last year.

“We like where Kyle is at, we just haven’t seen it,” Leftwich said. “None of us – none of us have seen it. The only thing we’ve got is preseason reps. I think he’s gotten drastically better from the last time he stepped on the grass. We’ve just got to see and he hasn’t had the opportunity to be on the grass playing. It should be a fun summer for him – offseason for him – where he’s going to play a little bit and we’ll get to see him. I like where he’s at from an awareness and understanding point. Now he just has to touch the grass and have trial and error. Really that’s where he’s at as a developing [guy] from the quarterback position.”

Leftwich says he will need to see his progression on the field before awarding any spots on the QB depth chart behind Brady.

“They’re just playing – nobody has a spot,” Leftwich said. “We’re just practicing and trying to get better right now. We’ll play all of that out when the time comes.”

Or perhaps Leftwich doesn’t want to shake Trask’s confidence heading into training camp by declaring the backup battle over.

J.C. Allen is one of PewterReport.com’s newest beat writers. As a New England transplant, he has closely followed Tom Brady’s entire career and first fell in love with the game during the Patriots 1996 Super Bowl run. J.C. is in his second year covering the team after spending a year with Bucs Report as a writer, producer and show host. Some of his other interests include barbecuing, being outdoors, and spending time with family and friends. His favorite Buccaneer of all time is Simeon Rice and believes he deserves a spot in Canton. Follow J.C. Allen on Twitter @JCAllenNFL.
Subscribe
Login
Please login to comment
26 Comments
Oldest
Newest
Inline Feedbacks
View all comments

I’m really not concerned. Not saying he’s the second coming, but how many seasons did Rodgers sit and learn. I trust they’ll figure it out in the preseason. It’s Trasks’ job to prove he can hang. Thankfully, there’s a lot of QB’s in next years draft that could challenge him

Rodgers, Brady, Favre, Warren Moon, Doug Flutie. The list goes on and on of QB’s that had to sit and learn, and it’s nothing new. I’ve seen Trask play first hand and I know the kid can play. Look what happened to the Gators after he left. They took a nosedive this year. He’s got what it takes and he will get to see the field. It’s really going to be a fun preseason

Not only that, but Favre would hardly raise a finger to help Rogers progress. He did not see it as his job to prepare his own replacement. Trask has the luxury of one more year under the GOAT. TB doesn’t plan on being here much longer so he can be gracious with everyone behind him.

We have the luxury of slowly and steadily developing Kyle Trask. Far better that than to thrust him in, sink or swim, with a significant risk of sinking as so many new quarterbacks do. For awhile there, before Tom Brady un-retired, it was going to be sink or swim for both Gabbert and Trask. Another year behind the GOAT will be good for both of them. But the Bucs most definitely do have to give Trask more reps than he got last year in order for him to keep developing. If you don’t think slow and steady is a viable… Read more »

Everyone wants to have Russell Wilson or Patrick Mahomes or even Joe Burrow. The thing is is those guys are the outliers. Far to often you get Tim Couch, or Ryan Leaf, or even David Carr. But when you have the patience to develop a guy then you know that they’ll know the system and there will be no learning curve.

Even Mahomes had to hold a clipboard his first year in the league.

Another reason we all need to thank Tom Brady for coming back this season!

Oh yes, Don;t know what plan B was

All these of coaches comments are premature because nobody and I mean Nobody knows until training camp how any of these players will perform.

Unlike you, the coaches watched all these players from last year’s roster throughout the entire off season, preseason, and season … and continue to watch them through all the OTAs. They can see development, both physically and mentally, that you cannot see, and I cannot see. Our coaches are perfectly qualified to make the statements they made here.

Maybe – but an injury can change that situation in a heartbeat. Next man up.

Ok well Maybe in a few more years we will know if he’s even a capable back up. Lol. Idk I’m not saying anything, because I don’t know but if you made me bet I’d bet he is not the answer. Time will tell.

The Trask experiment will be forgotten by 2024. Unfortunate.

God told you that?

I sure hope they don’t make the mistake of giving all the reps to Gabbert. The dude should know the system by now and you really, really don’t want to be in the same boat you were this year wondering if Trask is ready or not to take over. The only way you can get him prepared and know if he can do it is to get him reps. Christensen has never really impressed me, as I remember the offense of the Dungy era. Trask should see number 2 reps in pre-season for all three games to give him as… Read more »

what about Ryan Griffin–dude has been making cash off the Bucs for years and doing nothing! Resign Suh and leave Griffin and others off the roster!

probably the best comment I’ve seen here in a while

Kyle Trask got virtually zero reps in the Training Camp practice sessions I attended. Nor did he get any game experience until the final preseason game, which isn’t much more than a scrimmage with players on the verge of being released. I’m sure not going to judge him on that minuscule sample size. I suspect this Training Camp and preseason games will provide far greater opportunities for the youngster, but I’ve always thought the final pecking order of QB’s will remain unchanged for now. Leftwich and Christensen explained the reasons for Gabbert to be Brady’s back-up. Certainly we can see… Read more »

Just seems wrong to me. Don’t understand the plan of wasting the guy for two years not even seeing him get reps. Why’d we draft the guy. This is TB’s last year. Trask needs to be ready to step in next season. Gabbert’s time has come and gone.

Both Brady and Gabbert are vets and don’t need many reps. Why not have Trask actually accelerate his learning with his increased reps?

Regardless of what people think, Trask certainly looks much leaner from what I’ve seen on social media. Idk if that makes him a better QB, but it shows he’s working

To me it’s really about Brady, not Trask. Brady needs a vet that knows the system inside out and can help him break down the game as they play, show him what he sees, help with all the mental aspects of the game. Trask isn’t gonna be able to do that yet. Seems to me they took a kid they were surprised was there, because they thought he was a great value. I honestly don’t see a downside to letting the kid learn and come along slowly, then let him compete once Tom moves on.

Best part of drafting a QB is the window where you can take advantage of low cost. Two years wasted. We’re not talking about Rodgers not unseating Favre we’re talking about not being able to unseat Gabbert. Give me a break.

I don’t see it people talking about aaron Rodgers and Warren moon being back ups that’s not what Kyle Trask is he is a the back ups back up. Tom Brady with everything going on in his life and on the football field isn’t teaching him anything truly seems like a wasted pick Gabbert is terrible I don’t care how enamored the bucs are in him he is exactly who was when he was drafted which is he isn’t good. Hard enough to get the back up reps and the back ups back up I mean forget it so at… Read more »