If you’ve read my work or followed me on Twitter for very long, you know that I love scouting offensive and defensive line play, and one of the few voices in the field that I trust more than even my own is that of The Scouting Academy’s Brandon Thorn. Thorn, who also writes for Establish The Run and hosts the Trench Warfare podcast, devours offensive line tape at a ridiculous rate, scouting the majority of the league each offseason and then ranking players in tiers based on their most recent tape.

Recently Thorn tweeted out his rankings of the expected 2020 offensive line starters at each of the five positions, including expected Bucs starters Donovan Smith, Ali Marpet, Ryan Jensen and Alex Cappa. Tristan Wirfs wasn’t included due to the fact that he has yet to take an NFL snap.

Here are Thorn’s criteria for placing players into certain tiers:

Of the four Bucs’ starters Thorn did evaluate, here is how he tiered them heading into 2020 training camp. Make sure you follow Brandon on Twitter!

I fully believe that Smith played his best football last season, and I would probably slide him up into Tier 4 as a result. However there are still ugly lapses for Smith, sometimes in key moments, that remain frustrating in his evaluation. Pro Football Focus charged him with allowing five sacks and 34 pressures in what was by far Smith’s best graded season for the site. 10 of those pressures came in an ugly first two weeks of the year; after that Smith was a much stronger player the rest of the season. It’s unlikely that he’ll ever find high level consistency in his play, but I think his ceiling is in line with the Chiefs’ Eric Fisher as a starter you can win with in pass protection. Smith’s run blocking still leaves a lot to be desired heading into year six.

Thorn listed just two left guards above Marpet: Quenton Nelson and Richie Incognito. With Incognito set to fall off at 37 years old, Marpet is set to battle it out for the LG2 spot with tier-mates Thuney, Joel Bitonio and Rodger Saffold. Thorn highlighted his love for Marpet’s game in a Bucs Briefing column a few months ago. Marpet has been a Tier 2 guard for Thorn each of the past two offseasons.

Marpet is one of the most consistent and balanced offensive linemen in all of football, playing at a high level in the run and pass game. He should be slated for a great season as his comfortability level grows playing next to Jensen.

2019 was a huge year for Jensen, who solidified the Bucs’ decision to sign him as a free agent two years ago with a dominant campaign last season. The veteran center jumped from a Tier 3 player for Thorn to a Tier 2, largely due to having perhaps the best season of any center in the NFL last year. 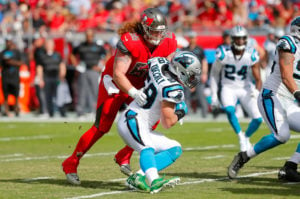 The Raiders’ Rodney Hudson, Eagles’ Jason Kelce and Falcons’ Alex Mack are the only players ranked ahead of Jensen, all in Tier 1. With all three of those centers 31 or older, Jensen could be poised to assume the league’s top spot if he continues to play as he did last season. He’s currently battling in Tier 2 with Maurkice Pouncey, Ryan Kelly, Mitch Morse and Frank Ragnow.

Many are probably surprised to see Cappa a tier above Smith, and I admit I wasn’t expecting that. This is probably the right tier for Cappa based on the games I studied last season, and I know Thorn was impressed with the Humboldt State product’s development in 2019.

“My thinking for the Bucs OL rankings on (Donovan) Smith was that even though last year was probably his best season, I’d need to see it for at least another half a season before solidifying his spot in Tier 4,” Thorn said. “Also having the last 3-4 seasons as a Tier 5 guy made it easier to keep him there all things considered. Cappa’s Tier 4 spot is based on his age and that I think he’s ascending. So I am projecting a bit there, but I think reasonably so.”

Cappa going from Tier 6 to Tier 4 in Thorn’s eyes is a big move. Even if he can settle in and consistently play a Tier 4 level, that would be huge for the Bucs’ offense. If Cappa can elevate his play to a Tier 3 right guard, Tampa Bay’s interior offensive line would be among the top two or three in the entire NFL. That would also be familiar territory for Brady, who consistently enjoyed great interior offensive lines in New England, most recently the trio of Joe Thuney, David Andrews and Shaq Mason.

Based off this study Donavan Smith is only an average replacement level player making a whooping $14mil a year. This Team simply just can’t afford to pay everybody with Stars like Godwin, Lavonte, and Shaq deserving new deals. I suspect next offseason LT to be #1 target for this team via free agency or draft, because 6 yrs of mediocrity when we are on the brink of doing something special means plugging every hole. Nothing against Donavan but for the same reasons we didn’t pay Winston it’s time to “Move On”

Frankly, I’m very encouraged. If a couple can raise their game one level, and Wirfs is in the ballpark of what we think he will be in a year or two, this could be a great line for quite a while, in a relatively short period of time.

So if Wirfs can start the season at least at Tier 5 without the benefit of the pre-season he would have had, maybe he can achieve Tier 4 level by season’s end. Perhaps, he can elevate to Tier 3 by the play offs. Who knows has fast he can progress.

It will be very interesting to see how he rates after his third season.

Agree with assessment. Smith is below average in many areas. Glad someone else sees it too. He’s above average durability.
Also can’t rate Whirfs off college, but I guarantee he will instantly be an upgrade over Dotson for run blocking. He will struggle with pass blocking though so to me his first year will be a wash over Dotson. Yes better run blocking but pass blocking he will take time especially with current situation and no pre season.

I think we’ll see a lot of run blocking schemed towards the right side. Pairing Cappa with another run blocking mauler could pay huge dividends for the Bucs this season, and keep Brady off his back if teams have to take the Bucs’ run game seriously for once.

Oh but didn’t you hear. Our line sucked last year. Winston only took 47 sacks because of the line. It can’t possibly be because he held the ball too long

Many Tampa fans also believe the line sucked last year. Do you read these boards? A majority of fans wanted everyone replaced except Marpet. They especially hated Jensen and Smith. Many felt bad about criticizing Dot since he had been here so long, but in the end, he had to go too.

Well there ya have it. That’s for all the D.Smith apologists our there. And yet, he felt he deserved a raise, because his 14 MIL for adequate play. Sure bud, you name your price and we’ll pay it lol. You’re totally worth it

Sorry Captain Sly, I missed the Average Replacement Level Player category. I guess you made that up on your own to fit your feelings about him. I believe the category Smith fell into was an Adequate Starter, not a replacement player which I would guess to mean he was coming off the bench. This shouldn’t surprise you since you seem to know so much about player salaries but Very Good and Elite tackles are paid in the $16 million range the last time I checked. So at $14 million, Smith isn’t vastly overpaid. That doesn’t mean I’m excited about Smith’s… Read more »

Not sure how you view the word “Average” but average is defined by being “Replaceable”………
Dr Dneast no one hires a Surgeon and hopes to get just average results and no one drafts a player and hopes he develops to be just an average player… Sorry but not everyone receives a trophy for participating and so when we move on from average players like Winston & Dotson it makes room for Exceptional players like Tom Brady & Rob Gronkowski… Cheers!

Listen… this is all very subjective! This Buc’s O-Line WILL be better this year. It’s another year that they they have played together. Dot was a solid player for us but Father Time waits for no one. Back and knees were hurting for a couple of years now. With Wirfs as his replacement we should see some improvement at that this position. This is a huge season for LT Smith. I think he will improve his play, but should he not he might just get replaced after the season. Perhaps, even having Wirfs move over to LT… its a possibility.… Read more »

Wirfs will be an improvement in run blocking on the right side. His pass blocking may take some time to improve to satisfactory, but he’s so damn athletic he may be able to recover from ordinary rookie mistakes much better than your average rookie starter.

I am not trying to be an apologist for Donovan Smith but I submit the following for consideration. Because a premier left tackle is considered more valuable than a premier right tackle or a premier guard he necessarily will get paid more. So even if Smith is merely adequate by NFL standards he still gets paid. (Just becoming an NFL starter is a real accomplishment. … But, that’s another story.) He may not be anything more than adequate as a run blocker but, if he is at least a bit better than the average NFL right tackle at pass protection he must be regarded… Read more »

If Wirfs has an outstanding rookie year, I wouldn’t be the least bit surprised to see the Bucs have him compete against D Smith for the starting spot at LT next summer.

Glad to hear an expert grading D. Smith where I have always graded him even when worthless Warhop called him a top NFL LT. He is definitely overpaid at $14 Million and should be replaced by Wirfs. Haeg can play RT just fine.

So Jason Bust Licht, Chief Architect and neglector of both lines, has drafted a grand total of one above average offensive linemen over a six year period. And we have almost no quality OL depth to boot. Brilliant.