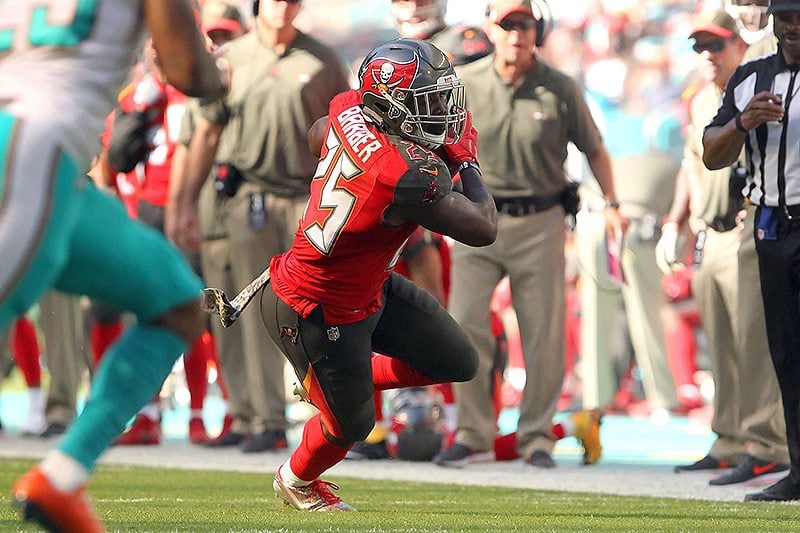 After the Bucs ended a five-year streak of last-place finishes in the NFC South with a 9-7 record and a second place finish in the division in Dirk Koetter’s first season as head coach in Tampa Bay, the team was right back in the cellar in 2017. Expectations were high coming into the 2017 campaign on the heels of being featured on Hard Knocks and the 5-11 record the team produced was incredibly disappointing.

Now that PewterReport.com has dished out its awards for the 2017 Buccaneers MVPs, Rookie of the Year and Assistant Coach of the Year, it’s time to hand out some more player awards. Before we move on from the dismal 2017 campaign and look ahead to 2018, PewterReport.com reviews the individual efforts from the Buccaneers’ performances in its 2017 Pewter Player Awards.

Unfortunately for the Bucs, Martin gets this distinction for the second year in a row. After signing a five-year, $35.75-million contract in the 2016 offseason, Martin has been a huge disappointment with back-to-back years of less than 500 yards rushing. In fact, outside of his Pro Bowl season in 2014 when he was the second-leading rusher in the NFL, Martin has had four sub-500-yard seasons in the last five years. With Martin scheduled to make $6.75 million next year, his time is likely up in Tampa Bay as the lack of a consistent ground game has plagued the Bucs for years.
PREVIOUS RECIPIENTS:
2016 RB Doug Martin
2015 TE Austin Seferian-Jenkins
2014 LT Anthony Collins
2013 QB Josh Freeman
2012 RB LeGarrette Blount
2011 QB Josh Freeman
2010 WR Sammie Stroughter
2009 WR Michael Clayton
2008 WR Dexter Jackson
2007 QB Bruce Gradkowski
2006 RB Cadillac Williams
2005* WR Michael Clayton

Hargreaves had plenty of competition for this distinction from the likes of defensive ends Robert Ayers, Jr., Will Gholston and defensive tackle Chris Baker among others. But, Hargreaves was the most targeted cornerback in the NFL during his rookie season and gave up more yards than any cornerback in the league in 2016. Hargreaves needed a confidence boost in 2017 and seemed to get that in training camp and the preseason, but it was short-lived. Hargreaves lost his starting job and was moved inside to nickel cornerback where his play slightly improved until an injured hamstring cost him the last seven games of the season. The bottom line is that Hargreaves was the 11th overall pick in the 2016 NFL Draft and he has just one interception in his first 25 games in the league, which is very disappointing.
PREVIOUS RECIPIENTS:
2016 CB Alterraun Verner
2015 CB Johnthan Banks
2014 CB Alterraun Verner
2013 DE Da’Quan Bowers
2012 CB Aqib Talib
2011 SS Sean Jones
2010 DE Kyle Moore
2009 DT Chris Hovan
2008 DT Jovan Haye
2007 DE Greg Spires
2006* FS Will Allen

Jackson came to the Bucs with dreams of him catching deep passes for touchdowns from quarterback Jameis Winston. But Winston and Jackson never developed the deep ball chemistry that allowed them to connect on those long TD passes. That’s not Jackson’s fault. The 31-year old speedster did his job by getting open. But the fact that Jackson had just 50 catches for 668 yards and three touchdowns was a little underwhelming, especially for a player that made $12.5 million last year. Yet he was the Bucs’ Best Free Agent Acquisition, and both he and the team are looking for a better 2018 season.
PREVIOUS RECIPIENTS:
2016 CB Brent Grimes
2015 C Joe Hawley
2014 DT Clinton McDonald
2013 CB Darrelle Revis
2012 WR Vincent Jackson
2011 P Michael Koenen
2010 SS Sean Jones
2009 K Connor Barth
2008 C Jeff Faine
2007 FB B.J. Askew
2006* DT Jovan Haye 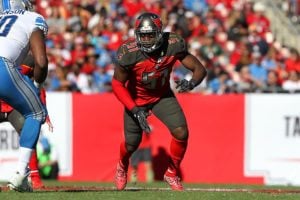 Despite the negativity that surrounded the Bucs’ dismal 2017 campaign, McCoy stayed positive throughout the season and showed good leadership in the locker room and on the field. When he suffered a torn biceps in Tampa Bay’s 24-21 loss to Detroit, McCoy vowed to get back on the field with just three games remaining. After missing the Bucs’ Monday Night Football game against Atlanta, McCoy returned the next week and sacked Carolina quarterback Cam Newton, pointing to his torn biceps muscle as he headed to the bench after his big play on third down.
PREVIOUS RECIPIENTS:
2016 Jameis Winston
2015 QB Jameis Winston
2014 LB Danny Lansanah
2013 RG Davin Joseph
2012 DE Michael Bennett
2011 DT Brian Price
2010 LB Adam Hayward
2009 RB Cadillac Williams
2008 K Matt Bryant
2007 DT Jovan Haye
2006 QB Tim Rattay
2005* FB Mike Alstott 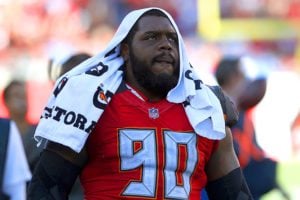 *Indicates the first year that the award was given by PewterReport.com (formerly known as Buccaneer Magazine and BucMag.com in the 1990s) 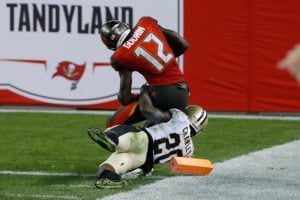 The Bucs’ best play of the year came on the final offensive play of the year as Winston threw caution to the wind and heaved a deep pass to Godwin, who was streaking down the right sidelines in single coverage. With Tampa Bay trailing New Orleans, 24-23 with nine seconds left, the safe call would have been to throw a short pass to tight end Cameron Brate near the sidelines to set up a potential game-winning field goal. But Winston liked the match-up and threw a perfect pass to Godwin, who had a step on the Saints defender. He caught the ball at the New Orleans’ 2-yard line and was tackled in the end zone for a dramatic, come-from-behind victory to end Tampa Bay’s disappointing 2017 season on a high note. Had Godwin been tackled in bounds the game would have been over, as the Bucs didn’t have a timeout left. It was a gutsy throw by Winston and the rookie receiver rewarded his quarterback with an amazing play, which happened to be Godwin’s first NFL touchdown.

As the Bucs stand right now with the same coaching staff, same systems and without the benefit of new personnel via free agency and the NFL Draft just yet, it’s hard to see Tampa Bay posting a winning record in 2018. While some fans may hope for a “bounce back year” for the Buccaneers this season, the belief here is that Tampa Bay had a good deal of fortune in posting nine wins the previous season. The reality is that the Bucs overachieved in 2016 with a 9-7 record and underachieved in 2017 when the team mustered only a 5-11 mark.

The Bucs need to add more talent at running back, cornerback and on the offensive and defensive lines. Playing in the rugged NFC South where Tampa Bay was the only non-playoff team won’t help the Bucs next year, nor will playing strong NFC East teams like Philadelphia and Dallas, and AFC North powers like Pittsburgh and Baltimore.

The Bucs will be a better team next year, but how much depends on the right moves in free agency and the draft, as well as overall improvement on both sides of the ball. And Winston’s possible suspension from the NFL over an alleged groping incident could prove to be a disastrous start to 2018. We at PewterReport.com are done (over)hyping this team year after year, predicting breakthrough seasons that never materialize. We’ll finally believe the Bucs will field a playoff team – after they actually make the postseason, which won’t be next year.

Perhaps this would have been a good year not to give an award for best free agent acquisition.
I think you are low-balling the Bucs with the 6-10 prediction. And, after all the hype last year, I can’t blame you.

Definitely debatable with some of the choices. As to the 6-10 2018, I see us going to the playoffs if we spend the top two draft picks on defensive ends.

DE’s often do not have a storied history of production as rookies. Rarely are you going to get a player who approaches 10 sacks as a first year player. Khalil Mack had 4 sacks as a rookie, Chandler Jones 6, Calais Cambell 0, Everson Griffin 0, Bruce Smith (all-time sack leader) had 6.5, Kevin Greene (3rd all-time) 0, Chris Doleman (5th) .5 sack, Michael Strahan (6th) had 1, Jason Taylor (7th) 5 sacks. You have a much better shot getting immediate production from a free agent or trade like Calais Campbell, Simeon Rice, Chandler Jones. Julius Peppers. But given the… Read more »

Agreed with most of the other comments here already. Just as a 12-4 kind of prediction was way overhype this year, a 6-10 prediction is way underhype for next year.

I don’t even care about Option A and Option B or any of that, as long as they just do the basics 10-6 is probable. Book it.

If they just do the basics 10-6 is probable? You realize there are other teams in the NFL right? This is like when everyone was assured that the 3-player Mark Dominik triumvirate of Gerald McCoy, Lavonte David and Doug Martin would be the cornerstone of a winning franchise for years to come. Newsflash, there are 22 players on the field at any one time. There are also 31 other teams in the NFL. Just because you like a player here or there or some rookie played well doesn’t mean that future HOFers that play the Bucs or top 10 offenses/defenses… Read more »

McCoy and David ARE kind of important still you know and it’s not like we don’t have other major contributors on the team besides those two. Watch the games we had this year, especially in the middle of our losing slides. We’re competing with teams that made it into the playoffs this year despite massive holes in the roster due to either injuries or a lack of talent at particular spots. We went from -20 vs Saints to +7 with injuries and ultimately nothing to play for. Saints played their 1s. We went from -14 vs Panthers and Falcons to… Read more »

So if the Bucs who scored 20.9 PPG putting them at 19th in the NFL in total scoring merely add 4 little points every game, which would literally vault them to a top 10 offense (9th) in line with Pittsburgh’s 25.4, then they win a lot more games? Why, I think you cracked the code Justabuc! The Bucs just need to be a significantly better football team, top 10 in scoring offense and they’ll be a good team. You’ve convinced me! If only we could all take ourselves from being slightly below average at something to the top third, we… Read more »

I apologize by being vague, but I was talking about point differential rather than just ppg. The difference is that the former includes defensive performance. For example, 1 TD turning into a FG on defense would be a -4 to the opposing team in point differential.

I can totally see why you thought that and while it would be super nice to be a top 10 defense, I’m thinking more of a moderate increase in offense, defense and special teams that either increase our points or decrease the opposing team’s points.

6-10 maybe, because of the killer division, but if Smitty can turn the D around, the Bucs should be pushing for a wild card spot.

The Bucs need an identity, wait, a better identity.