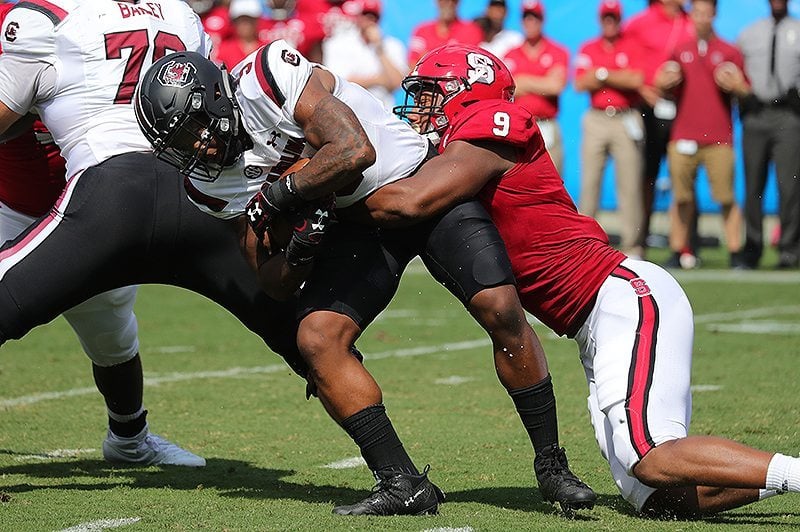 PewterReport.com analyzes the top players in the 2018 NFL Draft with its position previews. Trevor Sikkema previews the defensive end position with a comprehensive look at what the Bucs have and what they need from the defensive end spot, a detailed list of this year’s top ends and offers up the annual PewterReport.com Bucs’ Best Bets – one early round pick, and a pick from the later rounds.

What The Bucs Have At Defensive End

What do you do with a defensive line unit that was the worst in the NFL in its previous season? You blow it up, that’s what you do.

The Bucs thought they brought in their missing piece last year when they signed defensive tackle Chris Baker, but that didn’t turn out how they wanted. Baker was suppose to bring not only size but also a pass rushing element from the nose tackle position to help out All-Pro defensive tackle Gerald McCoy on the inside. But, that’s not how things worked out. Baker looked lost during the 2017 season, only recording half a sack in 15 games played.

Baker and McCoy’s success on the inside was suppose to help the defensive end players, too. Second-year player Noah Spence was hoping to have an improved year following a rookie season where he recorded 5.5 sacks, but Spence ended up injuring his shoulder just six games into the season. On the other side, William Gholston, who had a nice new contract, failed to record a single sack for the first time in his career. The Bucs also used players like Robert Ayers, Will Clarke and Ryan Russell as their defensive ends, but they weren’t up to starting caliber in terms of the NFL average.

That brought in some big changes — the two biggest changes so far going into 2018. For starters, the team signed former Super Bowl champion pass rusher Vinny Curry after he was cut by the Eagles this offseason. After that move, the Bucs got even more aggressive and traded their third round pick for another former Super Bowl champion, pass rusher Jason Pierre-Paul. For the first time in a long time, with those two additions, the Bucs really do have a pass rush rotation with Spence and Gholston behind those two starters, but they likely aren’t done adding to the defensive line with the draft coming up.

What The Bucs Need At Defensive End

Though the Bucs seem deeper at pass rush than they have been in a while, they still need as much help as they can get — you can never have too many pass rusher. The Bucs could be in a prime spot to add a top-notch pass rusher at the top of the draft, if they choose to do so, but could also pounce on the defensive end class anywhere in the draft, really. Though it’s not as stout at the top outside of N.C. State’s Bradley Chubb, the Bucs could still get a useful rotational player in the draft at a variety of spots. Especially if they trade down, look for Tampa Bay to keep building on their edge presence in the draft.

Josh Sweat as the #3 defensive end, ahead of Davenport? I don’t think so, Sweat was highly touted coming out of High school, dealt with an injury. As a Noles fan I believe Sweat is undersized (250 lbs) and underperforms. I combine guy for sure, very little production in college.

If you think he is undersized, then you must think that almost this entire list is undersized. Go back and look again, half of the list is the same weight or LIGHTER.

Davenport is over hyped

I’d definitely take Sweat over Davenport. I’m glad Licht picked up JPP so he doesnt reach on Davenport early. I hope he isnt done at the position tho. Hope he trades back, gets more picks and gets a DE early.

My guess is the Bucs don’t take a DE until at least the 6th round.
Bucs have to draft RB, OG, S and Corner in rounds 1-5.

Wausa, the don’t “have to draft” any of those positions unless the player matches up value wise. They need to draft defensive end early and often.

Doesn’t make sense loading up on D ends in a weak draft class. Don’t need a bunch of Will Golstons on the team. This draft is loaded with D tackles, and with McCoy’s career winding down we’d be foolish not to take advantage of the strength of the draft. The harsh reality is we need R.B., C.B., S.S., O.G., O.T., D.T. maybe more then reaching for a D.E.. Not saying we shouldn’t draft one, or bring another in after cuts, but signing JPP, and Curry should allow us to play to the draft, and fill other needs, of which we… Read more »

During the NFL Combine, Tampa Bay Buccaneers general manager Jason Licht took some time to discuss the Bucs recent offseason moves as well as this year’s draft class and Licht made it clear that he sees a lot of potential in UTSA defensive end Marcus Davenport. Licht provided the following reasons why: @ScottSBucs Jason Licht on UTSA DE Marcus Davenport: Explosive, raw. Licht likes the fact that Davenport is raw because it means there’s a lot of room for him to develop. 11:11 AM – Feb 28, 2018 · Indianapolis, IN. UTSA had their Pro Day Wednesday March 28 and… Read more »

Clarification: Some draft analysts now believe he could be taken in the top 10. More accurately reflects what I actually read.

Macabee, It seems to me we have weapons on offense that can still get us down the field short or long. I don’t believe we have any shot at Chubb at spot 7 and if we can’t get him, then I would focus on James or try to move down. We are extremely weak at Safety & CB and this is where I believe we should go IF we pick at spot 7. Your thoughts on what we should do?

Horse, I wish I had a ready answer to your question, but I don’t. I think you’re right that DE Chubb will not likely be there. But If either Barkley or Nelson is there, would I pick a SS or DB? Probably not! Do you believe the experts who say that Nelson is a surefire pro bowler at his position? Do you think it odd that the Bucs would have RB Barkley in for a private visit and not report it? All things to make us hesitate to say what the Bucs will do. Right? I honestly believe that there… Read more »

You make good points. Thank you.

There is nothing “overhyped” about Davenport.

If anything, I believe some are over playing where he attended college.

Turn on the game tape and watch him dominate. Watch him play against “better” competition in the Senior Bowl and he once again made plays.

He will only get better in the next couple years.

This team needs to draft players on both lines. Not so much as immediate starters, but to develop depth and bring in young talent on the lines. Patch work FA shouldn’t change draft plans and good teams build from the lines back. I think somehow this concept was been lost on this franchise and I’m afraid that signing FAs, will once again make the importance of building the trenches seem like less of a “need. They will probably come out of the first two rounds with a safety and a RB…puke. Once again ignoring the trenches in the draft. We… Read more »

Man, it would be nice to have one of those top 10 in our roster next week….
Go Bucs!