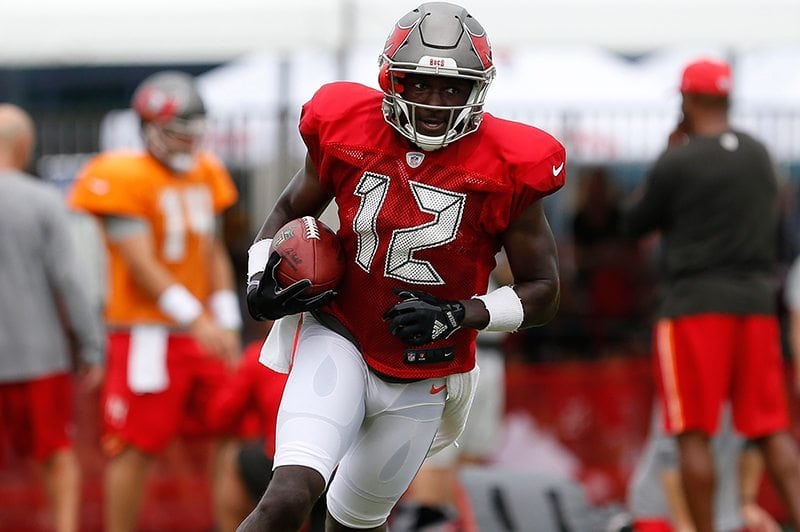 Bucs wide receiver Chris Godwin didn’t accumulate the big stats that some other rookie wide receivers did last season. 34 catches, 525 yards and just one touchdown was all we saw from him in 2017. However, that was more about the situation he was in behind Mike Evans, DeSean Jackson and Adam Humphries. All of that affected how much playing time he ultimately received, especially to start the season.

But, when he was on the field, Pro Football Focus says he was the second-best rookie wide receiver of 2017.

This hasn’t gone unnoticed, either. Godwin has been getting some reps as the team’s outside wide receiver opposite Mike Evans during the Bucs OTA practices over the last few weeks. Perhaps a starting outside role is in his future as soon as Week 1 of the 2018 season — it’s trending that way.

I would start Goodwin over Jackson because Winston doesn’t have to be perfectly accurate and Goodwin will still get the ball; same thing that Evans does. Both these wide receivers go after the ball!

Evans and Godwin outside with DJax in the slot, Howard or Brate at TE with Rojo in the backfield…pick your poison.

Trade Jackson to the Raiders for Penn. Helps us with cap space for about $2m and player we can’t seem to utilized effectively and we pick up a quality OT. On the flip side I’m sure Jon can figure out how to use Jackson.

Raiders only have 2 million in Salary Cap Space left so I don’t see that happening.