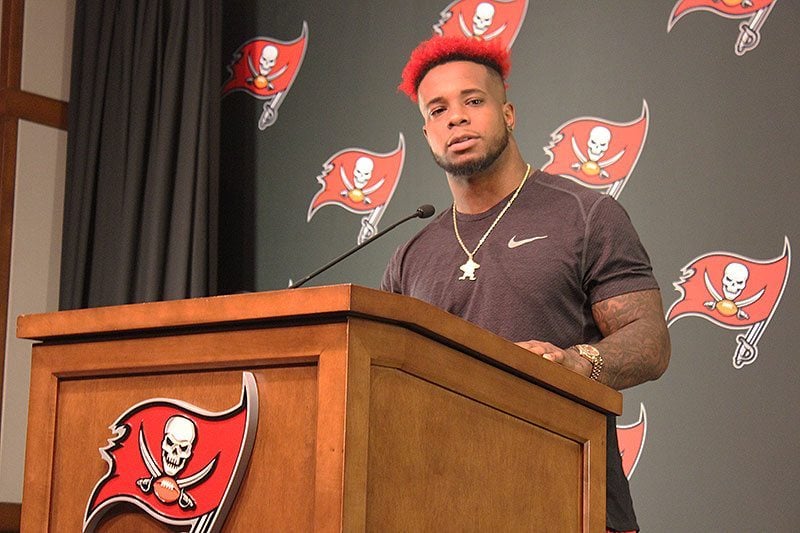 Optimism is never hard to find at the start of NFL training camps and Tampa Bay Bucs linebacker Kwon Alexander returned to One Buc Place loaded with it.

And when it comes to the ‘P’ word, the third-year linebacker is all in.

“Last year was in the past, this year it’s going to happen,” Alexander said when asked about the possibility of the Bucs playing playoff football this season. “I know it’s going to happen. We’re just going to go out here and work hard, come together and just play for each other and we can do it.”

Tampa Bay found itself on the postseason’s doorstep in 2016 before finishing 9-7 and getting edged out by a Detroit Lions team with an identical record. The Bucs enter this season as a trendy pick to take that next step and Alexander believes it wholeheartedly.

“For us to become a great team, everyone has to come together,” he said from the podium while sporting a new bright red hairstyle. “We’re going to be working hard this camp and there’s going to be a lot of great things that are going to happen.

“It’s going to come. Just take it one day at a time and don’t look ahead. Every minute, every second, just be focused and get straight to it.”

Alexander was one of three Bucs players to address the media Thursday afternoon and the only defensive player. He was followed at the podium by wide receiver Mike Evans and tight end O.J. Howard.

The Bucs return the majority of their defensive squad and added a couple key pieces up front and in the secondary. One thing that should benefit the entire unit greatly is coming to training camp knowing what to expect from defensive coordinator Mike Smith. The defense tightened up its play as it familiarized itself with Smith’s scheme. Its improved play was critical in Tampa Bay winning five straight and turning its season around.

“We’re going to hit the ground running,” Alexander said. “We’ve been in this system already. It took us a little minute last year to get it all together, but then we put it together and made our run. Now we’re all comfortable with the system and everybody’s just got to get back in the playbook and get it all down pat with no mistakes. That’s what we need – no mistakes and no big plays and we’ll do a great job.”

Alexander’s let it be known this offseason how he feels about the level of recognition he receives, or lack thereof, from others outside the Tampa Bay area. His eagerness to get back on the field and prove himself further showed Thursday.

“I’m very excited; I’m ready to go today. If I could go out there today I would. I’m just ready to get back with my team. I was so happy to see them, everybody’s excited and ready to go. There’s just a lot of energy in the locker room.

“I’m just anxious to get back out there and hit somebody.”

Kwon’s so anxious to hit somebody, his head is on fire! lol.