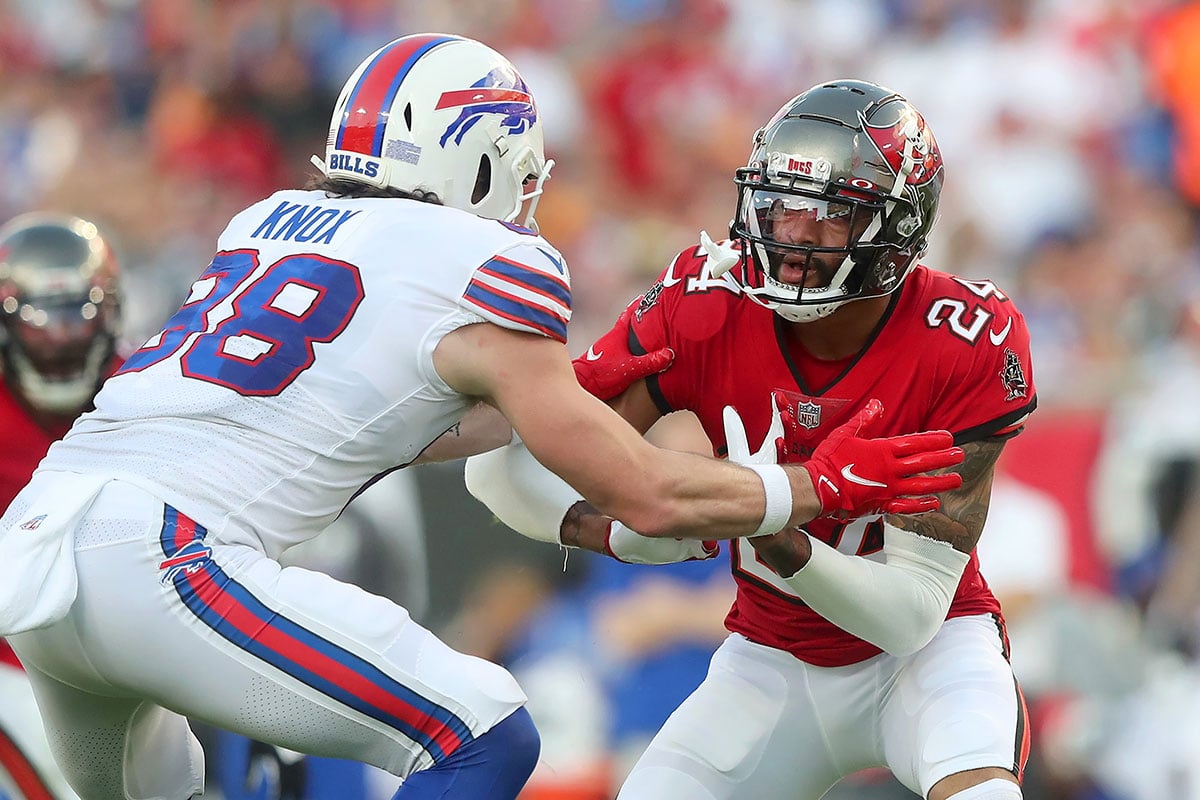 According to radio host Andrew Fillipponi on 93.7 The Fan in Pittsburgh, the Steelers have their eyes on two pending Bucs free agents. Cornerback Carlton Davis and safety Jordan Whitehead will both be on Pittsburgh’s radar next week, per Fillipponi. The Bucs have yet to give any of their key secondary pieces a second contract. Both Davis and Whitehead should be high on Tampa Bay’s free agency priority list next week.

Source: Steelers will make an effort to re-sign Terrell Edmunds. If he goes to market next week, look for the Steelers to make a play for former Pitt safety Jordan Whitehead.

In his report, Fillipponi writes that the Steelers will make a “serious offer” to Davis. We already know the Bucs were not going to use the franchise tag on Davis, even if Chris Godwin had been re-signed already. That likely means Tampa Bay considers Davis’ market at less than $17 million per year. That’s what the stud cornerback would have received on the tag.

Pittsburgh rarely makes major splashes in free agency, but they need cornerbacks desperately, and have far more cap space than they typically do. Davis’ scheme versatility and press man ability would be a perfect fit in the Steelers defense. However, the Bucs will compete to re-sign Davis. The price tag will be the main issue. If Davis commands north of $17 million per year, Tampa Bay will likely let him move on.

As for Whitehead, I said on the Pewter Report Podcast months ago that the Steelers would target him in free agency. Pittsburgh is likely to let Terrell Edmunds leave, and Whitehead could be a prime candidate to replace him. The Bucs strong safety grew up outside of Pittsburgh, and has family ties to Mike Tomlin. He’s the exact mold of safety the Steelers would like to pair with Minkah Fitzpatrick. But, with a massive pay day looming for Fitzpatrick, Pittsburgh may not want to commit significant money to two safeties.

Jordan Whitehead, just being the best run-defending safety in the NFL. pic.twitter.com/0GW9KajEAJ

Bucs may regret not tagging Carlton Davis, hopefully I’m wrong but whether you believe he’s worth $17mil a year is not the reason for the tag. You place the tag so the player comes off the market to buy time for a new deal. I have said this many times before that Chris Godwin is not worth $19mil a year the Bucs tagged him buying more time for a new deal. Problem is they tagged the wrong guy

I agree with you on the purpose of the tag, but that’s the rub – if the team (1) knew it wasn’t willing to pay CD $17M for one year on the tag, and (2) was confident that they were not going to come together on a deal, then it only makes sense NOT to tag him. If, say, the team was offering $13M per year, and Davis and his camp weren’t moving below $18M (possible, as that would be only the 4th biggest CB salary right now, AND Davis has confidently talked about himself being as good as any… Read more »

And you’re wrong on Godwin. He’s ABSOLUTELY worth $19M per year, at least from a market value standpoint. There’s no world in which Kenny Golladay is getting $18M per year, and Mike Williams just signs for $20M per, and that Godwin plays for less than $19M. Maybe you don’t personally think he’s that good, but the market defines value, and his value is clearly at leasts at, and likely above, that $19M per year figure. That said, yess – the obvious purpose of the tag with Godwin was to buy time to get the extension done. And the reports have… Read more »

Last edited 3 months ago by toofamiliar17

Nope! Godwin is not worth 19 mil per or anything north of that number. If Godwin were to have been a free agent rather than being tagged he would be signed as WR 2, not as a WR 1. He’s got to get healthy and play an entire year and produce more to get that WR 1 distinction. He’s an awesome Buc and I’m glad he’s a Buc for at least this next season. Him and Mike r, together r almost unstoppable. Godwin needs to be careful as well. Not every Buc player who leaves the Bucs finds the grass… Read more »

You can’t actually be serious about that. Godwin is a number 1 on at least half of the teams in the NFL. Injury or not, teams would be throwing money at him.

CD lll is not worth 17 mil. That’s why he wasn’t franchised by the Bucs. I’d rather have JC Jackson from New England. He might even cost a little less and will certainly get u more INTs. Better hands as well. CD lll needs a change of scenery as do the Bucs. He was part of a dreadful defensive backfield last season. I’d rather resign Whitehead, better value, and go after JC Jackson. As for Godwin, great player, him and Evans r arguably the best WR tandem in the league. He is not worth 19 mil per though. How u… Read more »

Yo man you been on all these posts the last few weeks spreading why Godwin & CD3 aren’t worth what they are asking for. You are certainly entitled to your opinion but I think you are missing the fact that the market figures for players changes every time the cap goes up. And now that the cap has gone up ~20M, players will make more. CDIII will easily make $17m on the market considering he’s one of the three best corners available; one of the league leaders in PBUs over the last 3 years and still just 25. He was… Read more »

I’m not sure if you’re aware, but the market rises at every position literally every year. Evans signed his contract in 2018, and became the 3rd highest paid WR in the league (behind only OBJ and Antonio Brown). As of right now, in 2022, he’s sitting at 5th (in cap hit, which doesn’t = what he’s actually getting paid).