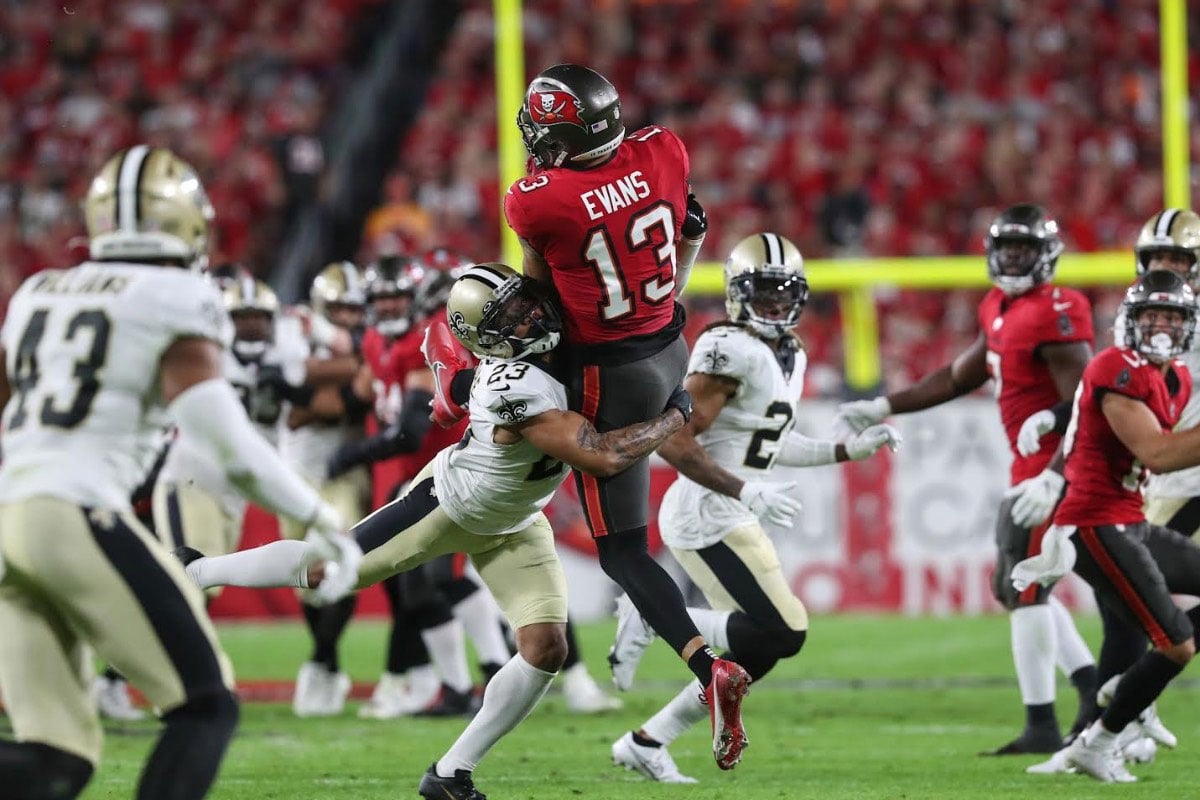 According to NFL Network’s Ian Rapoport, the Bucs have received some positive injury news Monday morning. After losing Chris Godwin, Mike Evans and Leonard Fournette to injury in a 9-0 loss to the Saints, all eyes have turned to the trio’s prognosis. On Monday, Rapoport tweeted that it appears Evans and Fournette avoided major injury.

The rest of the injuries bear watching, but don't appear to be anything severe.
— Mike Evans’ hamstring should be OK, nothing major.
— Leonard Fournette may miss some time, a game or two, but not a major injury. https://t.co/EgOFcXGop5

Both Evans and Fournette suffered hamstring injuries on Sunday night. It sounds like Evans is ok, and may have a chance to play this week against the Panthers. We’ll see what Bucs head coach Bruce Arians says today at his 2:30 presser. Fournette might miss a little time, which will leave the Bucs thin at running back. The fifth-year pro has dominated the running back snaps this season, rushing for 812 yards and eight touchdowns. The Bucs have already lost third down back Giovani Bernard to injured reserve as well.

The Bucs will enter Week 16 looking for answers at wide receiver and running back. Antonio Brown will return, joining Scotty Miller and Tyler Johnson as surefire options for the upcoming matchup with the Panthers. Breshad Perriman is currently on the COVID list. We’ll see if he clears protocol by next Sunday. Meanwhile, Godwin is likely going to miss the rest of the regular season with an MCL sprain.

The Bucs return to action against the Panthers in Week 16.

As I said in one of my postings last week. On any given Sunday, you can get your butts kicked in this league. Saints truly have our number. And you can bet..other teams are dissecting how the Saints consistently beat us. So what you gonna do Bucs? Ruck up. Nobody cares about our injuries but us. Its next man up baby. The saints were the better team yesterday..period. Onward towards the Light!

Well said! We are not out of the running because of one loss, even if it is another in a too long regular season series by a hated foe. We have to find a way to get on a roll for the playoffs with all available guys including the “walking wounded” and “backups”. Last year we went in and had to accomplish everything on the road.
It is not too late until you have a loss during the playoffs.
_______________
Go Bucs!!!! Win the next one in front of you!

Rally the troops, the war ain’t over!

Firm believer in the benefit of timely wake-up calls, we might have needed one. We are only as good as we play this week. Go Bucs.

This is going to benefit them. They got their asses physically kicked up and down. The defense did a great job though. If we win this again it will be the defense that closes it out. It wont be bad to give the injured guys a game or 2 of rest to get ready for the playoffs. If we can get everyone on the field the last game of the year then get into playoff games where anything can happen, who knows where it all ends up.

Vaughn sucks. RoJo has hands of brick for pass catching. Not good at all. WR will be better with Brown and maybe Perriman as Darden, Miller, and Johnson all not good at all as far as “starters” gadget guys. Johnson is slow as molasses. This season just seems like lost to me. Will see if they can get healthy in 3-4 weeks for playoffs but every time they play more guys go out.

Man it doesn’t take much adversity for some of us to pack our toys and go home. Good thing the team doesn’t think like this. Playoffs are most important and we should have all the pieces back come playoff time. This week we get AB back and they can actually game plan with what we have instead of removing our top 3 offensive weapons and trying to adjust mid game. Defense played great and they have not for weeks, that’s a bright spot for sure. We are 10-4 and we are crying, saying the season is lost…..? You made some… Read more »

Last edited 6 months ago by Beavis

Great point Beavis. Guys like Fred and others who become so outraged when they don’t like the result of a play or, Heaven forbid, an actual loss, could never have dealt with the years of the Bucs being the absolute worst team in the league.

The “Jones has hands of bricks” assertion simply isn’t valid. Perhaps Too Familiar could research the actual statistics, but I don’t recall seeing RoJo drop a pass this year. It may not be his strength, but he catches well enough and in my view runs better than Fournette.

Didn’t know Godwin is done for the season with just an MCL bruise. Is that confirmed? Good thing, obviously, that AB is coming back. I would not expect Gronk to play so ineffectively either – anybody can have a bad game. Perriman ought to be back on the field by next week. Better to rest Evans if need be, ditto with Fournette, as we have the weakest opponents of the season these last three weeks. Frankly I’m more concerned with our pass protection which completely disappeared last evening. Guys who have been routinely called the best offensive line in the… Read more »

Other credible sources say Godwin tore ACL – out for the season!
Damn shame for the kid on a contract year too.
Go Bucx