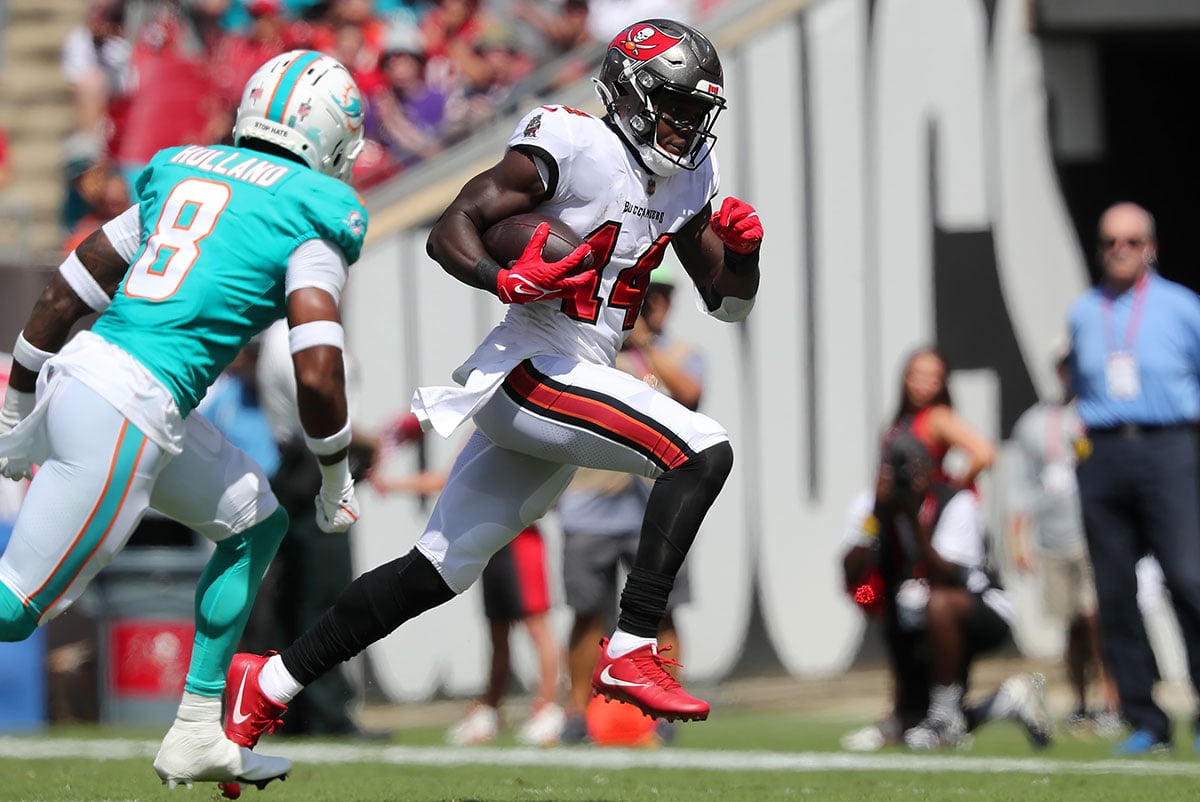 When the free agency tampering period opens on March 14, all eyes will be on Bucs WR Chris Godwin. The star pass-catcher is set to hit the market for the first time, and he should be in high demand. According to ESPN’s Jeremy Fowler, Godwin is making a strong recovery from his torn ACL. Fowler also reports that the Bucs wide receiver is “excited” to hit the free agent market this summer.

“As for where he plays next year, Godwin certainly isn’t ruling out a return to the Bucs. They’ll be in the mix. But he’s also excited about his first foray into the open market. Quarterback play will be important, but not the only factor. Sources said the Bucs see Godwin as a cornerstone and would like to find a way to re-sign him.”

Deshaun Watson has begun evaluating potential fits for his services in 2022, with #Bucs and #Vikings among teams on his radar.

There has been rampant speculation that Godwin will be less inclined to sign in Tampa Bay following Tom Brady’s retirement. As Fowler indicates here, I’m not sure that would be the case. Obviously quarterback play matters, but even if Brady returned there was no guarantee he’d play beyond 2022. Godwin is 25 years old and is likely to sign a 4-5 year contract this offseason. He’s not going to make that commitment for maybe one more year with Brady.

Instead, Godwin will look at the best offers and weigh that against his affinity for Tampa Bay. If the Bucs match or top the best offer, I believe he’ll stay in Tampa Bay. But if the Bucs aren’t willing to pay market price for an extremely valuable player, Godwin could walk. However, I think the Bucs will be aggressive to retain such a critical player. Pro Football Focus projects Godwin’s next contract at 4 years, $70 million.

As Fowler reports, it does seem likely Godwin will hit the market. If he hadn’t torn his ACL in December, I think the Bucs would have locked him up already. But now Tampa Bay might be willing to wait and see if the injury will drive down Godwin’s price in free agency. Remember, last year’s wide receiver market was disappointing for quite a few big names. So don’t expect much action before March 14.

Ugh, I get so tired of the same old crap all the time. I absolutely Love Godwin. He one of our most valuable players and we are always better when he is in the game. But yet again, if it’s gonna becomE some kind of bidding war then maybe we should Draft a WR Round 1, pick up another solid #3 option as a possession Slot receiver and spend his $17 mil to solidify some other spots. I Love Godwin and I want him to stay a Buc and it’s his right to get greedy and try to bankrupt and… Read more »

Godwin needs to make a decision. Is he a team player or a greedy player, guess we will find out soon. I know everyone would like to maximize their options during free agency but at the same time you need to make the right decision, be the right fit, so many times guys aren’t the right fit for their new teams. I would give him an option and he doesn’t come back there are other options via free agency and draft (those scouts better make sure their evaluation pans out).

I would really like Godwin to stay with the bucs long term. I think the bucs should still draft a wr in the first regardless of what he decides to do.

I agree. We have seen how important it is to keep the offense rolling when it comes to the playoff runs. The injury bug jumped up and bit us over and over again during the past two seasons as well.
I expect us to draft the best player available in the first round. I expect to see us draft a WR in the first two rounds at least. Many are saying this is a great draft for the position.

Common sense says Chris Godwin has to look at his options. The NFL is a business and he must look out for his own interests. I’m sure that he wants to see what the rest of the teams think about him. I would if I was in his shoes. I also would believe a class guy like him if he indicates publicly that he would prefer to return to the Bucs. I am confident that Licht will pull out all of the stops when it comes to finding a way to keep Godwin. He is a major fit for Arians’… Read more »

Wouldn’t be surprised to see a team like the Dolphins or Jags make a big push for Godwin. They both have a ton of cap space and I think Chris would immediately be the #1 WR. – No state income tax either.

Somebody here says Godwin needs to make a decision. Really? He is under no pressure to stay with our Bucs. None whatsoever. Go for the money dude. NFL careers are short. And i can think of at least 5 teams who will offer him top shelf cash. Sure, the sunshine is appealing. But money trumps all of that. Go get that paper Chris whether it’s here or with another team.

Don’t get your panties in a wad guys, reports like these are sent out by agents looking to drive up the price tag for their guy. Godwin has already been on record saying that he would like to finish his career here while bringing up how he has already bought a home and considers TB his home. Things like this, and no state tax, make it hard for a guy to leave to test unknown waters. He knows the Bucs are still a strong contender and he’s spent enough time on a losing team, so he knows what that’s about.… Read more »

I may be the minority here. For the last two years, Godwin has been an above average receiver not in the elite group like Evans or even Brown. I based that on how a receiver can change a game. Did they draw double coverage immediately; how big is their catch radius. I compared Godwin to another Tom’s favorite slot receiver Julian Edelman who is much smaller at 5’10” and slower and yet he was constantly and reliably moving the stick at critical must have moment. If he can get a better offer elsewhere, good for him

I dont agree with this, the comparison between the two wrs doesn’t make sense because they were asked to do different things in different schemes. Godwin is not good at one thing but overall really good at alot of things which in my opinion makes him elite. As far as Godwin and Bruce arians scheme he arguably is the most important piece into the entire thing that’s why bucs are making a big effort to keeping him long term.

Even if BA is only here for 1 more season?

Even so because there is a strong possibility they promote in house for his replacement in the event he is here for 1 more season.

And ur thinking that BL will run the same offensive? Maybe bro? Maybe not? I’m sure it will resemble BA’s offense in some regards but I’m sure BL will want to add his own touch to the mix. Godwin and s a beast! This is a given. But, u have Evans, the greatest WR in Buc history making 17 mil per already. He is coming off an injury… this may or may not hinder his performance. 4 years/ 70 mil seems in the ball park. But it does come with a medical risk that is unknown at this time. Any… Read more »

I would imagine it looks very similar with some tweaks here and there but it was a very successful scheme why you would stray to far away from that doesn’t make much sense to me. If you sign Godwin long term which if they can bucs should certainly do I would imagine the contract would be structured in a way to make it easy to come off of if he cannot perform so I’m not too concerned about that and that would be with any team not just the bucs.

Unfortunately we are back in the have-not camp when it comes to proven high caliber QB play in a league wheee it’s hard to win without it. Top free agents looking to go to the playoffs most years with a shot at the SB seem unlikely to come here. I take no joy in saying that but that’s how I would look at it were I Godwin. Inevitable turnover in the HC role maybe as soon as next year doesn’t help, no matter what you think about Lefty and Bowles, you don’t take that chance if you don’t have to.

I dunno I think they still have several good pieces just need a decent QB and they can fill the other spots that need to be addressed and roster a competitive team might not be in 2022 but I could see a very good shot at making a run in 2023 even if it’s bowels or leftwich at hc if arians retires and if not then I would imagine the front office puts a good team together for a good coach to come in and have a go at it I remain optimistic go bucs.

Bring back Chris!! One of my favorite Bucs!

Losing Godwin would be a huge mistake. Brady broke the records in Tampa mostly because he had a huge arsenal of weapons to throw to. Godwin is not just the best receiver on the Bucs Roster, he is one of the best in the entire league. Just pay him and let’s move on to the next player we need to be signed.

To be the best, u have to produce year in and year out and play even if injured. That’s what makes Evans the #1 WR on this roster! Godwin is good. He’s productive. But he has not put together 3 1000 yards receiving in a row yet. He’s had injuries and that makes it tough to get the stats. That’s what makes the play of Mike Evans even more amazing! 8 season in a row with 1000 yards receiving. That’s NFL historical bro. Mike Evans is a first ballot HOF…right now! Is Godwin? No matter QB or Offensive line, Evans… Read more »

Comical how some folks think players are “greedy” simply by wanting to be paid commensurate with their performance and equal to their peers. I’m pretty sure the people making those remarks might want to seek other employment options if their own pay was substandard to their co-workers.

I agree! Get it while u can get it! Ur just one injury away from ending ur career. That’s the nature of the beast. Try to out perform ur last contract so u can get paid! I wish Godwin the best… but am hoping for a little home town discount!

Going to need CG back…especially with Gronk not coming back.