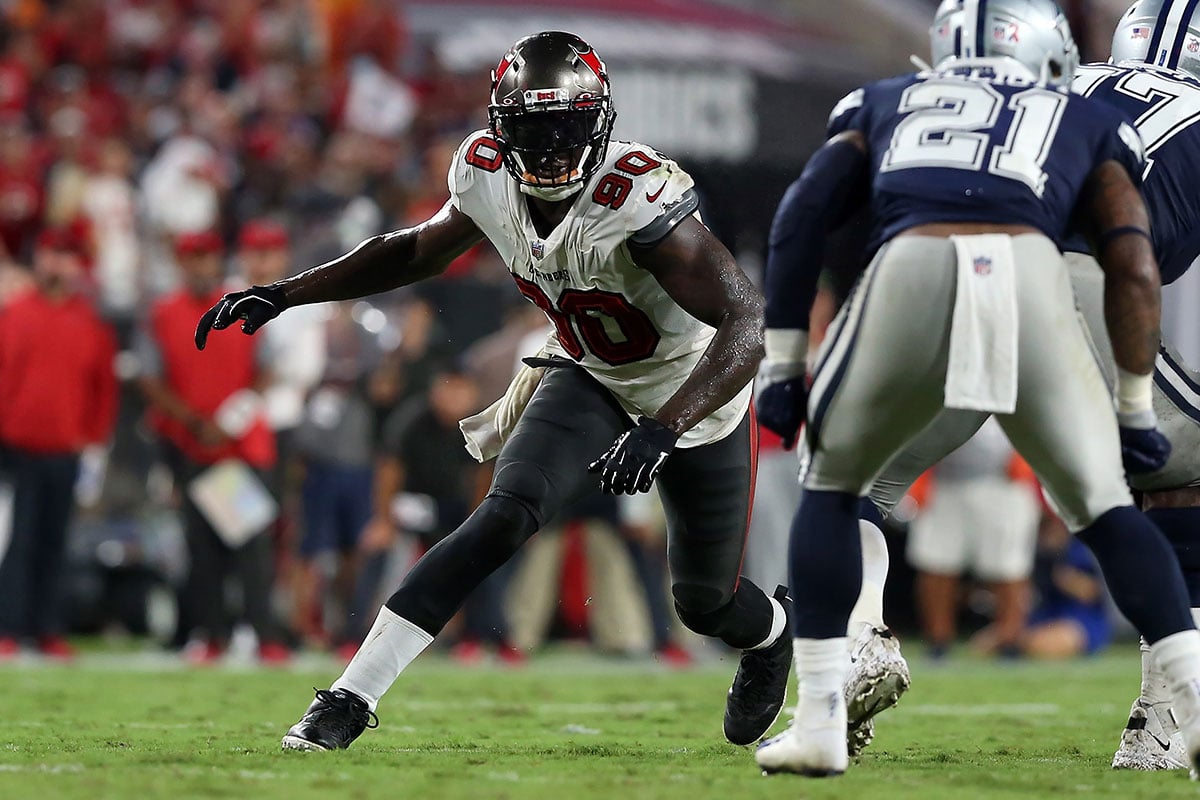 According to ESPN’s Jeremy Fowler, the Dallas Cowboys are interested in Bucs’ free agent Jason Pierre-Paul. The outside linebacker is recovering from surgery on a torn rotator cuff, but could be back for the start of the 2022 season. As expected, the Bucs have not made a strong move to re-sign Pierre-Paul at this time. Rookie Joe Tryon-Shoyinka outplayed the veteran last year, and is expected to start in 2022.

#Cowboys could go with multiple veteran pass-rushers in free agency to help offset loss of Randy Gregory. They've got Dante Fowler in the fold, and there's interest in Jason Pierre-Paul, as well.

Pierre-Paul’s tenure with the Bucs has been nothing short of brilliant. Acquired in a trade by GM Jason Licht, Pierre-Paul spent his first three seasons in Tampa Bay returning to his early-career form. Over three seasons, Pierre-Paul picked up 30.5 sacks in just 42 games. He was just as good in run defense, piling up 32 tackles-for-loss.

But in 2022, the wheels came off for Pierre-Paul. He tore his rotator cuff and broke his finger early in the season. The finger healed, but Pierre-Paul played through the shoulder injury all year. As a result, he was shockingly ineffective with just 2.5 sacks. In fact, the 33-year old increasingly lost playing time to Tryon-Shoyinka as the season went on.

When you combine Pierre-Paul’s recent injuries with his extensive injury history, he’s a concerning signing. A team like the Cowboys could pick him up now, but any club interested in him would be wise to wait until the summer. Pierre-Paul’s body has been through hell, and declining skill has been evident the past two seasons. For cheap the Bucs might sign him later in the offseason. But it appears the 12-year pro may not remain available much longer.

The ‘Grils think they can get him cheap but i think JPP is to smart for that. He no doubt thinks he will have to play for less money this season but if he is optimistic about his recovery he is going to wait before he passes a physical before he signs a cheap contract.

I think you are correct. He is no dummie!

Love JPP’s toughness but it’s probably time to move from him unless he will play lot cheaper than in past. Doubt he will though JPP has too much pride imo and partially why they kept playing him over JTS. I hate Dallas. Always overhyped every year. Dak is not elite and he can’t beat good teams or advance them in playoffs. It was hilarious Randy Gregory moving on last second and making them look like idiots. Von Miller said nope too. Why? Because Dallas isn’t going anywhere. Always over hyped team and they always lay an egg in playoffs. They… Read more »

Thanks for the memories JPP! Time to move on. We can get better value with that money and get younger as well.

I am willing to bet JPP plays better than JTS next season. JTS just does not have the body strength to fight through traffic. I think JPP will recovery from surgery just fine. Just a hunch

Eddie, you don’t think JTS is working on this?

If the Cowboys are interested in JPP, that might be a red flag that it’s time to part ways.
I love the guy, but he’s getting up there in years and has health issues. We might be able to do better.

There is no such thing as a..Cheap Pass Rush guys. I think..we are gonna find this out the hard way this upcoming season. We spend all that money on Offense. Better hope..they score 50 a game. We are gonna need it. Go get paid JPP. Bucs sure as hell ain’t gonna pay you.We lookin for a bargain basement Defense. Good luck with that.

I find it very hard to believe that Licht is not currently working on obtaining a DLineman as we speak! It would be derelict of duty for the GM not to. They know they need help with the pass rush. I’ve gotta believe that they know what they r doing.

We shall see. Something still tells me The Defense will not be given proper attention. As a fan, I hope you are dead right. But..We will not win A SB with a mediocre Defense. Brady or not. No hiding in the NFL. You are the product on the field. I venture to say we have a one yr window with Brady. Unless the Bucs can truly afford his asking price next contract. Looking at what’s out there. I would not let JPP get away. Dudes a warrior.

U r absolutely correct! Our Defense was the culprit in the playoffs… well that and Bowles…that’s another topic. We will not get by Rams if we don’t improve on Defense! Just showing up to the fight with the same crew is not the answer. We will get same results. Brady almost brought us all the way back. Our Defense has to be even BETTER than last years. I’m not seeing that with the loss of Whitehead. No Suh? No JPP? What about Gohlston? Licht better have something up his sleeve or this Offensive reload we got going on won’t matter.… Read more »

Defense finished in the top half of the league and played well enough to hold the Rams to within striking distance. The defense caused the turnovers that set up the offense to give it at chance after scoring only 3 points. Same defense did pretty well when it was intact.

Scubog, one could say the Defense also lost us the game and put us in a tough spot from the get go because of the poor pass rush and DB coverage early in the game?

But not the offense that scored a mere 3 points until the game was nearly over and people were leaving?

twspin, tough decisions for sure ahead for Licht.

twspin; got to make sacrifices somewhere after obtaining a large part of salary cap for WR’s and OL. We can’t afford JPP too when we still have to sign Lenny.

I’d be an awful GM for a lot of practical reasons (never played organized football for one) but I’d be most awful because I’d never take emotion out of it. I love JPP and hope he retires a Buc.

Well, do to overpaying Godwin and Jensen, might as well kick the salary cap down the road and sign him too; same for Suh and Goldston. Lets just overpay everyone and screw us even more 2-3 tears from now. I’m for paying younger before all these older guys because it’s justifiable. Godwin not, because he is far from ready to go full throttle. when the season starts. Everything else GM is doing I get and support. I sure hope he has a plan for 2024 and 2025 salary cap hell.

If I’m not mistaken, did he not make the Pro Bowl two years ago? If so, which is correct, how could you say his play has been on the decline for the past two seasons? Sure, last year he was injured all season, and I’m sure this affected his play. But that’s just one year of a decline, and I’d say that was probably due to his injury.

Perhaps this would lead to a compensatory pick for Bucs if they pay him, if not perhaps we can get him later

As much as I hate to admit it, and as much as I hope I’m wrong, the attraction to JPP seems more like nostalgia than anything else after last season. I realize he was injured, but it seemed like it was one injury after another the past few years. With the diminishing returns he’s shown, and JTS coming on strong last year, I think it’s time for either a cheap contract or a younger, more durable option.