REPORT: Hope Remains For Bucs To Reach Deal With Godwin 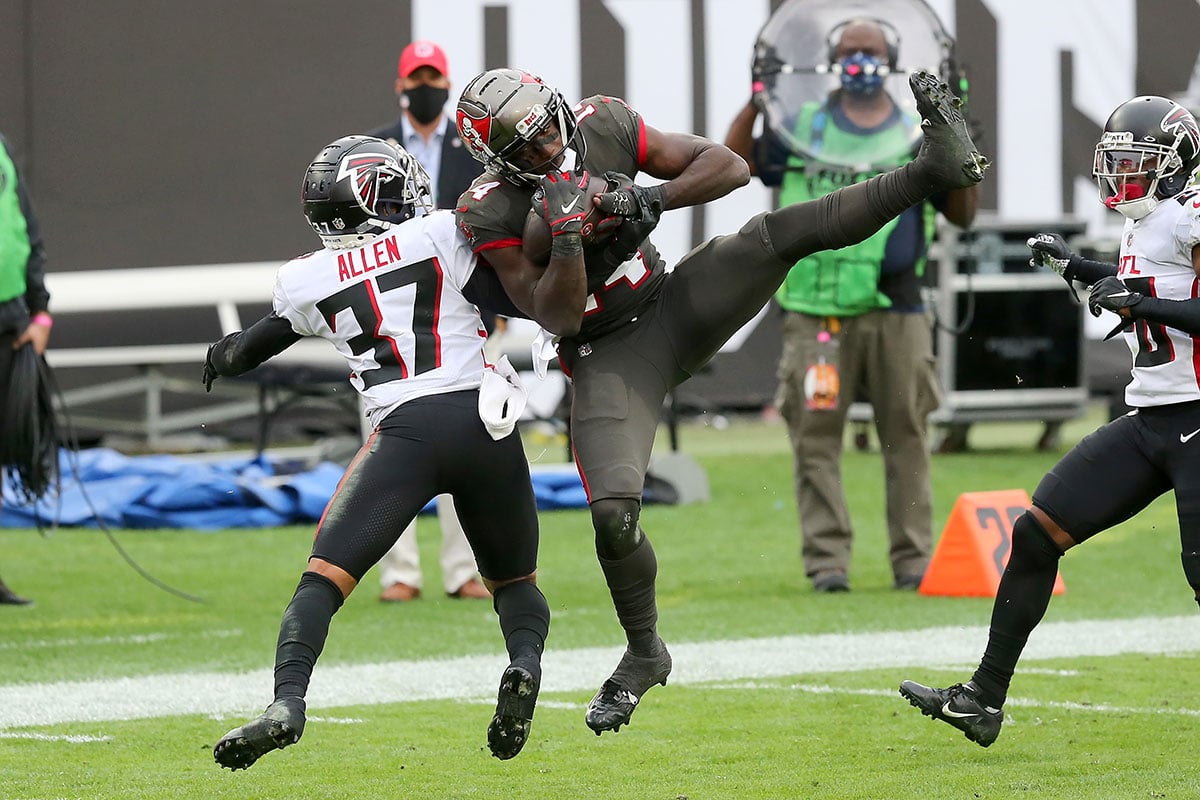 REPORT: Hope Remains For Bucs To Reach Deal With Godwin

Over the past few days, reports have percolated that the Bucs are likely to franchise tag wide receiver Chris Godwin. Such a move would not be ideal, as Tampa Bay would be unable to use the tag on top cornerback Carlton Davis. Godwin would also be owed over $19 million against the 2022 cap, until a long term deal is complete. That’s several million beyond what he’s likely worth per year on the open market.

However, according to The Athletic’s Jeff Howe, not all hope is lost just yet. Howe reports that there is still optimism the Bucs can come to an agreement on a new contract with Godwin before the franchise tag deadline. By Tuesday at 4pm EST, all NFL teams must notify the league of their franchise tag designations.

There's still some hope the Bucs and WR Chris Godwin can reach a new contract, per source. The preference would be to avoid the franchise tag, but that possibility seems to be in play if necessary.

If the Bucs can lock Godwin up before free agency, it would be massive. It would ensure one of the team’s most important offensive pieces remains in the fold for years to come. But it would also open a clear path for the Bucs to apply the tag to Davis. Tampa Bay’s No. 1 cornerback will command top dollar on the market, making him very difficult to re-sign.

The Bucs have a plethora of free agents they wish to re-sign, but none more important than Godwin and Davis. Getting two of their top players back for 2022 and beyond would be a big step in reversing a currently nightmarish offseason. The retirements of Tom Brady and Ali Marpet have dealt a significant blow to the Bucs’ playoff chances. But the return of Godwin, Davis and a few others could ignite hope once again.

We need to do the right thing. In this case the right thing is to Franchise Carlton Davis III. They need him to prove his durability. The Franchise tags buys them a year. They want Godwin back and are willing to pay him market value from what has been reported. If Godwin wants more, then he doesn’t want to be here. We can move on. Franchising him solves nothing and hurts the team in creating a problem with Carton Davis III. Not franchising Godwin does not guarantee he leaves. This is the year of the receiver in the draft and… Read more »

Well the deal Mike signed, when he signed it, made him the second highest paid receiver in football at the time. He wasn’t dong the team any favors with his per year average. This is CG’s best opportunity to get paid the most money he’ll ever see in his life. With Brady gone, he and every other impending FA for the team recognize the same thing any fan with an ounce of sense also sees – that the short term future of this team is murky. Why would he give a discount? Makes no sense to expect him to IMO.… Read more »

Here are three reasons to give your team a discount. Ask Brady why he never had to be the highest paid QB in the league even though he is considered to be the greatest of all time. A little saved here and a little there adds up and enables the team to acquire more assets increasing the teams chances of getting to a super bowl. Another good reason to give a home town discount is NO state tax. If you can take a little less and still bank the same amount why not give your team a discount. One other… Read more »

These are all good points but I don’t think the Bucs are asking for a hometown discount, I just think they have a number that’s different from CG’s number (conflict of market value). The best thing for both parties is to let Chris hit the market to see what teams are offering and if he wants to play for the Bucs let the team match the offer. Personally I think this is where it’s heading and I fully expect Carlton Davis to get the Tag.

I’m starting to think the franchise tag is just too much to pay for Carlton Davis. We need to find a cheaper alternative that can stay healthy.

I think tagging Davis is smart. If he doesn’t stay healthy or has himself another 0 int. year, I wouldn’t extend him. He’s had lot of int’s off his hands. He seems to have hands of Brick. Lol. I think Bucs should offer Godwin fair money 16 million year or so and he if he doesn’t want to stay let him go. I hate to say it but this team isn’t going to be a playoff team. Not in 2022. Maybe further beyond that just depends on many factors now. So no I wouldn’t break bank on Godwin now. Love… Read more »