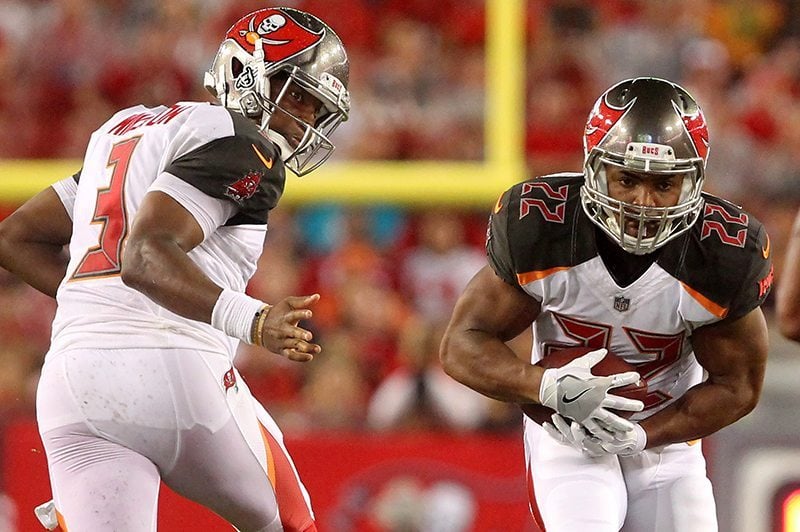 The Tampa Bay Buccaneers started off the 2017 with an unfortunate first-round bye due to Hurricane Irma threatening Miami and rest of the state of Florida. The Bucs are now expected to open the season at home in Week 2 against the Chicago Bears, but that game could be in peril as the Tampa Bay area is expected to suffer a hit from Hurricane Irma.

Regardless of the weather-based obstacles the Bucs will face at the start of the season, Tampa Bay has the talent and the hunger to make the playoffs this year – the team’s first appearance since 2007. What will the Bucs’ record be, and which teams will Tampa Bay beat? Find out in PewterReport.com Publisher Scott Reynolds’ Bucs’ 2017 Season Predictions.

Week 2: Bucs vs. Bears – Sept. 17 – 1:00pm – Fox
Tampa Bay enters this game with a four-game home winning streak dating back to the 2016 campaign and will run that streak to five with a home win over Chicago in the Bucs’ first game of the 2017 season thanks to Hurricane Irma postponing the season opener in Miami. Whether it’s Mike Glennon at quarterback or rookie Mitchell Trubisky, Tampa Bay’s defense will be ready to repeat the rout that took place last year in the Bucs’ 36-10 win over the Bears – IF the city of Tampa is ready for the game at Raymond James Stadium after dealing with the after effects of Hurricane Irma.
BUCS WIN – TAMPA BAY IS 1-0

Week 3: Bucs at Vikings – Sept. 24 – 1:00pm – Fox
Will Minnesota be a good team in 2017? It’s a hard one to figure out. But with the Bucs on a two-game winning streak, confidence is high in Tampa Bay. This team has shown it can win on the road in hostile territory and if the defense can put the brakes on rookie running back Dalvin Cook, the Bucs should be able to squeak out a victory on the foot of Nick Folk.
BUCS WIN – TAMPA BAY IS 2-0

Week 4: Bucs vs. Giants – Oct. 1 – 4:05pm – Fox
The Bucs face their first real test of the 2017 season as the Giants, a legit playoff contender, comes to town. Eli Manning has had his way with the Bucs defense in the past, and while this is a different scheme with different players, the outcome is the same as Tampa Bay’s offense sputters. The Bucs lose their first game of the year and snap their five-game home winning streak.
BUCS LOSE – TAMPA BAY IS 2-1

Week 5: Bucs vs. Patriots – Oct. 5 – 8:25pm – CBS/NFL Network
The Bucs will have a short week to battle Tom Brady and the defending Super Bowl champion Patriots on Thursday Night Football. While the Bucs will be fired up for this challenge, and eager to avenge their loss to the Giants on Sunday, Brady and the revamped New England offense is too much in another disappointing loss.
BUCS LOSE – TAMPA BAY IS 2-2

Week 6: Bucs at Cardinals – Oct. 15 – 4:05pm – Fox
Tampa Bay lost in embarrassing fashion last year at Arizona, 40-7, and it won’t be that way in 2017, especially with the Bucs having 10 days to prepare and rest up after two home losses in the span of five days. The Cardinals will be more formidable this year and the home-field advantage proves to be the difference in a close defeat as the Bucs fall below .500 after a third-straight loss.
BUCS LOSE – TAMPA BAY IS 2-3

Week 7: Bucs at Bills – Oct. 22 – 1:00pm – Fox
The Buccaneers right the ship and get it back on course with a blowout road win at Buffalo against an overmatched Bills team. The offense lights up the scoreboard as both Mike Evans and DeSean Jackson have big days in the passing game. Tampa Bay’s defense puts the stranglehold on quarterback Tyrod Taylor as the Bucs get back to their winning ways.
BUCS WIN – TAMPA BAY IS 3-3

Week 8: Bucs vs. Panthers – Oct. 29 – 1:00pm – Fox
The Bucs will want to recapture some of the momentum it had earlier in the season and win a close game against the Panthers. In a game that resembles the 2016 season finale, a 17-16 Bucs win, Tampa Bay gets a victory in its NFC South opener. The Bucs defense harasses Cam Newton, contains Christian McCaffrey, and establishes a solid ground game with Doug Martin.
BUCS WIN – TAMPA BAY IS 4-3

Week 9: Bucs at Saints – Nov. 5 – 1:00pm – Fox
Tampa Bay has a second NFC South game in as many weeks, this time at New Orleans where not much has changed. The Saints offense is as potent as ever with Drew Brees and Adrian Peterson, but the defense remains suspect. That allows the Bucs offense to pile up the points and win a shootout to improve to 2-0 in the NFC South and win three in a row.
BUCS WIN – TAMPA BAY IS 5-3

Week 10: Bucs vs. Jets – Nov. 12 – 1:00pm – CBS
The schedule remains favorable for the Bucs as the woeful Jets come to town. Tampa Bay’s offense, defense and special teams play a complete game and overwhelm New York. With an impressive 7-3 record, this team is full of confidence and has now won back-to-back home games in addition to four games in a row.
BUCS WIN – TAMPA BAY IS 6-3

Week 11: Bucs at Dolphins – Sept. 10 – 1:00pm – Fox
The Buccaneers will beat the Dolphins whenever they play the game. I think they are the more talented team. All of Tampa Bay’s starters are healthy and expected to play. Stopping Dolphins talented running back Jay Ajayi and getting an early lead is paramount to a Bucs victory. The Bucs offense comes out firing with something to prove and finds the end zone repeatedly to fuel a win in what was supposed to be the bye week.
BUCS WIN – TAMPA BAY IS 7-3

Week 12: Bucs at Falcons – Nov. 26 – 1:00pm – Fox
The Bucs travel to Atlanta to ensure their second straight non-losing season, but come away empty-handed in an NFC South dogfight. The Falcons edge the Bucs in a shootout and a Matt Bryant kick is the difference in a down-to-the-wire contest. Tampa Bay’s four-game winning streak is snapped and Atlanta holds the edge in the race for the NFC South title.
BUCS LOSE – TAMPA BAY IS 7-4

Week 14: Bucs vs. Lions – Dec. 10 – 1:00pm – Fox
The Bucs face a must-win game at home to keep their playoff hopes alive. A loss to the Lions drops their record to 7-6, meaning Tampa Bay would have to win its remaining four games to have a chance at the postseason. Winston outduels Matthew Stafford and the Bucs defense is on point in a victory that gives Tampa Bay a three-game home winning streak.
BUCS WIN – TAMPA BAY IS 8-5

Week 15: Bucs vs. Falcons – Dec. 18 – 8:30pm – ESPN – W
The Bucs need a victory against the Falcons on Monday Night Football to still have a chance to win the NFC South division. With Jon Gruden’s name being affixed to Raymond James Stadium in the Bucs Ring of Honor, Koetter and Winston make the Super Bowl-winning head coach proud. Tampa Bay gets revenge on Atlanta with a thrilling win in overtime to match last year’s win total with two games to play.
BUCS WIN – TAMPA BAY IS 9-5

Week 16: Bucs at Panthers – Dec. 24 – 1:00pm – Fox – L
The Bucs’ NFC South title hopes take a big hit on Christmas Eve in Carolina. The Panthers are still trying to fight to get into the playoffs, so this was a must-win situation for Newton and Co. Is Tampa Bay doomed to miss the playoffs by a game and finish 9-7 for a second straight year? We’ll find out in the Bucs’ 2017 season finale.
BUCS LOSE – TAMPA BAY IS 9-6

Week 17: Bucs vs. Saints – Dec. 31 – 1:00pm – Fox – W
For the Bucs it’s pretty simple. Beat the Saints and make the playoffs as the second place team in the NFC South with a 10-6 record or miss out on the postseason with another 9-7 finish. Sweeping the Saints isn’t easy as the Bucs found out last year. A loss in New Orleans cost Tampa Bay the playoffs in 2016, but Winston leads the Bucs on a fourth quarter rally and a thrilling win that ends Tampa Bay’s eight-year playoff drought.
BUCS WIN – TAMPA BAY IS 10-6

Reynolds forecasted a 10-win season and a playoff berth for the Buccaneers. What records will PewterReport.com’s Mark Cook and Trevor Sikkema predict for Tampa Bay? Find out on Monday and Tuesday on PewterReport.com.

Don’t have a clue and not willing to take a wild a$$ guess. Too many changes, too many unexpected occurrences and didn’t see enough in preseason to move my barometer either way. I live in the Bay Area and didn’t get to see any NFL games as ABC/NBC/CBS chose to show only Irma alerts as it should be. Maybe I’ll get to watch MNF/ESPN, but probably won’t have power by then, so I’ve seen nothing and I basically know nothing. Lol. But I did get to watch the Chiefs/Patriots game before all hell broke loose on the storm front. This… Read more »

I agree with all of your predictions, except for Arizona. Detroit showed some of the Cardinals’ age and if David Johnson’s injury is serious enough to keep him out week 6, I think we’ll have enough firepower to outscore them. While I don’t see a win, stealing a win against The Giants would be huge, especially if sixteen games in a row proves too much late in the season.

Here is a line of thought.
Last year we beat the Chiefs in Arrowhead.
Chiefs beat the Patriots in Boston.
Why does no one give the Bucs a chance against the Pats in our house.
And just because it’s cold, we can’t beat the Pack?

I want to thank Scott for posting this during a major pain in the butt hurricane. What a nice respite from the storm. It was only a short break, but man it came at a good time.
Break out the chain saws fellas.
GO BUCS

Because the Chiefs team that beat the Pats last week isn’t the same Chiefs team we played last year. The Chiefs didn’t have Hunt who is an absolute beast and also didn’t have their pro bowl corner Marcus Peters, who is arguably the best corner in the NFL.