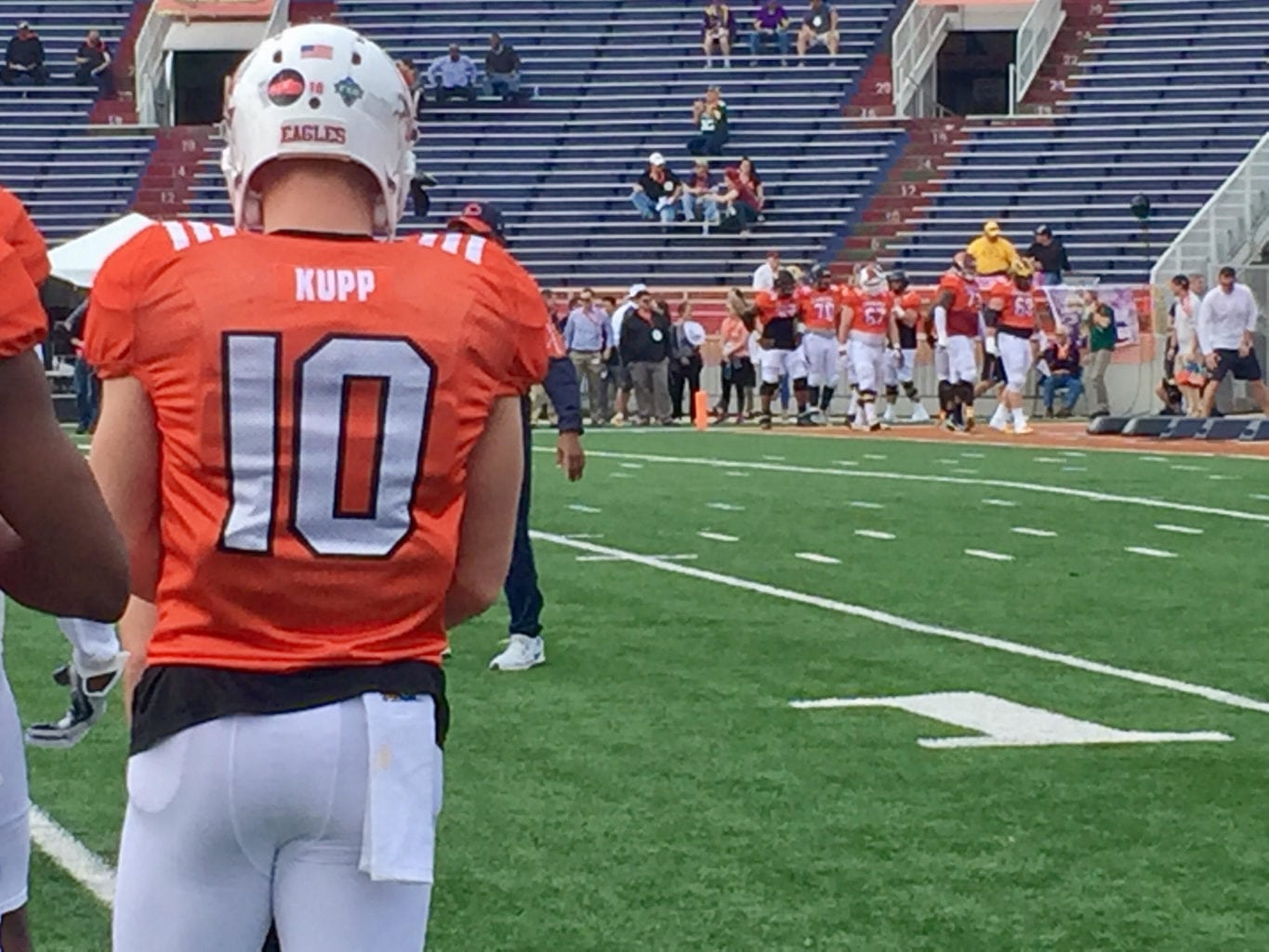 It’s not real football until you put the pads on, and on Wednesday at the Senior Bowl, the pads were on.

With no morning weigh-ins or evening Media Dinner to attend, all of the focus of the day was around the prospects and their performances. A few of the players we mentioned in yesterday’s recap were once again at the top of their game. Players like Texas A&M safety Justin Evans and Toledo running back Kareem Hunt played at the top of their position groups for a second straight day.

But, as expected, there were a few new names to make the notes on Wednesday due to the contact and intensity being increased. There was far more energy from the trench groups which made assessments of their abilities much more complete. The wide receivers also had to step up their game, as both the position drills and one-on-ones were more physical, focusing on making the players catch through contact and hold onto the ball.

Through the odd coaching styles of both the Browns and the Bears (Cleveland with its low-tempo practice and Chicago with its weird order of events), there were a few new standouts on the day.

Here are the top players who the Buccaneers may be interested in who stood out on Wednesday.

Tough for Tanoh to get his butt down in stance. Gets beat to 1st step, but kept fighting and wiggled away with long limbs. A "dirty" win. pic.twitter.com/4EbSHQZsIa

Kpassagnon was turning heads at the Senior Bowl before the first snap was even taken on Tuesday. After all, his 6-foot-7 frame at 280 pounds is hard to miss. His tape at Villanova is shows with him dominating lower levels of competition, at times, but it also shows an inability to stay consistent.

As you would imagine with a man who is so big and tall playing on the edge, leverage is his biggest concern.

The clip above shows a little bit of that. During these last two days – knowing that this is a 3-day job interview – Kpassagnon has been really focusing on getting as low as he can without giving up power – lower than the standard in his tape. In the play above, he does a nice job of getting low, but still lost at the point of contact, mostly due to losing the first step with Troy offensive tackle Antonio Garcia.

However, due to his long limbs, it was very hard for Garcia to keep Kpassagnon locked up. In the play above, Kpassagnon kept working and wiggling until he broke free at the end.

"Can't win inside, only around the edge". Tanoh countered that here. Quick fake step outside then exploded inside w/ strong rip. Great rep pic.twitter.com/GV6mwIkOYY

Another narrative of Kpassagnon’s is that he can only win when trying to bend around the corner. That’s not true, he just doesn’t have the same advantages to the inside, so he doesn’t use it or succeed with it as much.

However, it is possible for him to have success rushing to the inside. In the play above, Kpassagnon is actually lined up at the 3-tech defensive tackle position. The offensive guard, knowing Kpassagnon is not an interior lineman, assumed he’d rush to the outside. But after a quick fake step and rip, Kpassagnon blew right by his assignment and forced a holding call. That was a win.

Tanoh lost the first step again here, but that rip was so strong he still got around and forced the hold. That's disruption on a deep drop. pic.twitter.com/MK6eeG16Df

Finally, here’s a look at how strong Kpassagnon is. The play above was the rep directly following his inside rush where he had success ripping with his right arm. On this play, he did the same but with his left, and the result was similar. The offensive lineman could not handle his strength and arm speed from either side.

Kpassagnon made some money today. He has talked to the Buccaneers – as he has with every other team – and their interest should have gone up after today.

There’s reason to be somewhat cautious with Kpassagnon. The leverage consistency has to go up, and the technique needs to be cleaned up in few areas (mostly being faster off the line).

However, his potential is high. He’s a natural athlete who played basketball, soccer and even ran the 400m in track in high school. He has put on 70 pounds during his four years at Villanova, so he’s also juts getting used to his body at that size.

Potential is nice, but production is better. If the Bucs think he can produce, wherever that is relative to his potential, they’ll be interested in Kpassagnon as a Day 2 pick.

“He gets better the more players get on the field.”

That’s what NFL Network draft analyst said of Ole Miss tight end Evan Engram after that great route, throw and catch. He was right, too. As the week has gone on, and the closer the practices have become to actual football games, Engram’s game has stepped up.

Engram was seen as a go-to player on scrimmages, and looked solid in position drills. Alabama tight end O.J. Howard is still the top dog, but Engram is still a guy worth wanting in the top 60 range.

Here's a play the #Bucs would love to run more of: Play action rollout with TE Evan Engram on a slip and TE OJ Howard on a deep drag. pic.twitter.com/1DIxggx9ox

The play above is a visual Bucs fans can use when thinking of how he would incorporate within head coach Dirk Koetter’s offense.

In that clip, Howard was set up on the left side of the line and Engram was on the other. After a play action roll out to the right, Howard and Engram ran two parallel routes about 10 yards a part. Knowing the mismatch rate for both players was high, the chances werem one of the was going to be open.

It happened to be both that were open, but Engram got the ball on the shorter route.

After this play, when I referenced Engram, Inside the Pylon draft analyst, Shane Alexander, said next to me, “Oh, you mean Ole Miss tight end Jordan Engram or Evan Reed?”

The Jordan Reed comparisons are starting to pan out.

On Tuesday, Kupp sort of struggled. He seemed off when it came to attacking different coverages, and had a few drops on passes you wouldn’t think Cooper Kupp would drop.

On Wednesday, however, he was back to his old self. The man that recorded over 6,000 receiving yards while hauling in 73 receiving touchdowns at EWU was making it look like he was back on that red field in Cheney with plays like the one above.

Separation is so important for the wide receiver position, and just because a guy is athletic doesn’t always mean he can do it. Kupp does it very well with short area quickness and elite footwork.

What was great for Kupp, too, was that he was able to show off the play above where he can still produce a catch, even when he doesn’t win with separation right off the bat.

He showed scouts and general managers a lot of plays to like on Wednesday. As a 6-foot-2 slot receiver with that kind of ability, it’s looking like he’ll be a lock as a late Day 2-early Day 3 pick.

I haven’t been as active in the comments as I would have liked to be this week with everything going on, but if there’s a prospect you really like for the Buccaneers and want me to make sure I look at them on the final day of practice tomorrow, let me know and I will.

Thanks for these articles… how has Obi Melifonwa looked so far? How do you like the fit with the Bucs? I feel like with the Big Tall Recievers in our division that kind of safety might have some value to us

Will do my best to have an all inclusive report after the last practice.

Chidobe Awuzie
Colorado
Zay Jones
East Carolina
How are these guys coming along?

Trevor have the Bucs conducted any interviews that you are aware of? Thanks for the coverage. It’s been great!

MAN O MAN WISH WE COULD GET 4 OF THESE YOUNG MEN.