Should The Bucs Trade Back To Acquire More Draft Picks?

Home » Articles » Should The Bucs Trade Back To Acquire More Draft Picks? 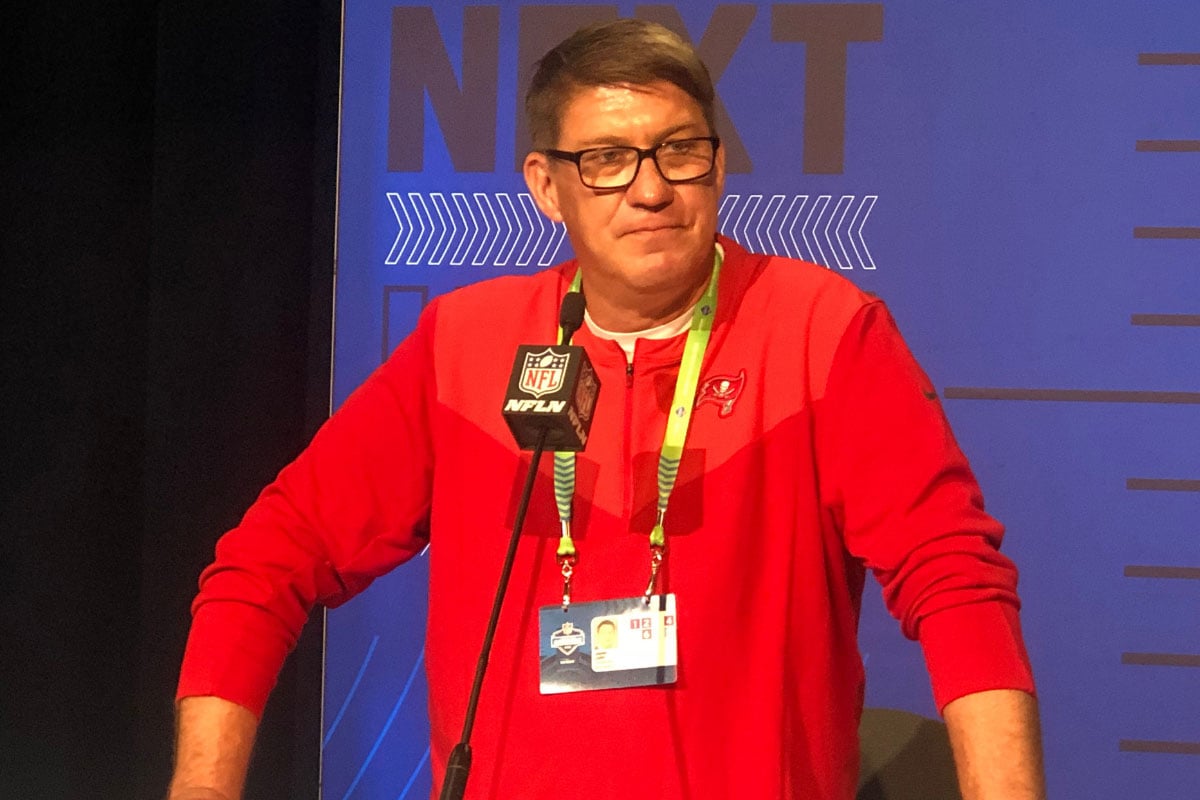 Should The Bucs Trade Back To Acquire More Draft Picks?

Home » Articles » Should The Bucs Trade Back To Acquire More Draft Picks?

It’s no secret that having success in the NFL Draft requires a good bit of luck. Sure, there are “safe” prospects. But those players are usually at the top of the board, selected early due to their attributes. As teams start moving later through the draft, it really becomes about projecting what a player could be.

The name of the game when you’re not picking at the top is to have as many throws at the dart board as possible. Not every pick is going to be a hit.

With the Bucs having the No. 27 selection, there are a few scenarios that could play out in the team’s favor. Some experts project Georgia defensive tackle Devonte Wyatt to Tampa Bay at the bottom of the first round. I’m still not convinced. There are too many defensive tackle-needy teams in front of the Bucs. It would be miraculous if Wyatt was still on the board. Tampa Bay has brought in or met with quite a few wide receivers projected to go in the first round. Though it’s looking more likely that Chris Olave and Treylon Burks are gone before the 27th pick.

The Bucs have also been looking at some corners as well. A potential position of need with both Jamel Dean and Sean Murphy-Bunting becoming free agents next season. However, they haven’t brought in any of the big-name, first-round prospects and they are projected to be off the board before 27 anyway.

Then there is the elephant in the room – the first-round guard talk. Do I think the Bucs should take a guard round one? No. Plain and simple this is a deep draft at the position and they can still get a quality offensive lineman in the second or third rounds. Perhaps someone like Dylan Parham or Cole Strange.

Of the two top names at the position, I’d be more inclined to select Zion Johnson over Kenyon Green. But it’s looking like even he won’t be available when the Bucs are on the clock.

As Tampa Bay comes on the clock, it’s very likely most of the top prospects on their board will have been selected. If the likes of Olave, Burks, Wyatt and Johnson are all off the board, the Bucs should try to trade back. Jason Licht has said himself there’s a lot of depth in the middle to late rounds at numerous positions. Of course it takes two to tango, but with positional fits and needs available in those rounds, adding picks would be a tactical move. Especially with the gap the Bucs currently have between the fourth (133) and seventh rounds (241 and 261). The question is how far do they want to move back?

The Bucs use their own trade evaluation chart, but here are a few trades they could make to gain extra draft capital using the Rich Hill trade chart.

Potentially looking to jump back into the first round to select a quarterback, Atlanta could offer the farm to move up. This would give the Bucs three picks in the second round and three within the top 60. In addition the Bucs would have flexibility to trade back if they wanted to gain even more picks. While unlikely, it’s not unprecedented. In 2018, Baltimore traded a second- (No. 52), fourth-round picks, and a 2019 second-rounder for Philadelphia’s first (No. 32) and fourth-rounder to select QB Lamar Jackson.

Move Into The Early Second: Another team that could be in the quarterback market that could decide to jump other QB needy teams. This would give the Bucs two third-rounders and flexibility to move around the draft the way they see fit. The Chargers made a similar trade in 2020 to move back into the first round to pick No. 23 from No 37.

Move Into The Top Of The Second:

The Jags could make a move to get back into the first round here leapfrogging other teams for the coveted fifth-year option on a prospect. The Bucs fill in some draft capital from their fourth to seventh round picks and also give themselves flexibility to move around the board. They give up a seventh-rounder in addition to 27. In 2016, San Francisco traded second-, fourth- and fifth-round picks to Kansas City for pick No. 28 and a seventh-rounder to move up nine spots.

Move Back In The First:

The Bucs stay in the first round in this final trade scenario. Detroit would move up jumping ahead of the other teams in front of them to possibly secure a quarterback before other teams could trade up for one or potentially another prospect they covet. In 2016, the Broncos made a similar trade to move up for quarterback Paxton Lynch giving up No. 31 and No. 94 to Seattle for No. 26.

J.C. Allen is one of PewterReport.com’s newest beat writers. As a New England transplant, he has closely followed Tom Brady’s entire career and first fell in love with the game during the Patriots 1996 Super Bowl run. J.C. is in his second year covering the team after spending a year with Bucs Report as a writer, producer and show host. Some of his other interests include barbecuing, being outdoors, and spending time with family and friends. His favorite Buccaneer of all time is Simeon Rice and believes he deserves a spot in Canton. Follow J.C. Allen on Twitter @JCAllenNFL.
Subscribe
Login
Please login to comment
18 Comments
Oldest
Newest
Inline Feedbacks
View all comments

I’m good with trading back if Wyatt isn’t on the board (and assuming there’s not another top-15-ish projected pick at a position of need that slides). I’d rather not go further than 40 or so, but depends on our compensation. If we can come out with good prospects at DL, Edge, CB, and TE, I’d be pretty happy. Bonus if we can get a decent RB and some depth at LB too.

Ideally this opportunity would present itself. We need more picks, We need defense at all positions especially DL and CB, and on offense, one or 2 TEs and a RB. If #27 arrives and nobody is poking out as a clearly higher value at that point, and we can slide back 10 spots, pick up maybe a 3rd rounder and still pick a player who can make an immediate impact on our team, I’d favor the move. I’d love to see JL work the board later to pick up a 5th and 6th as well for smaller slides back. In… Read more »

Lost me with the very 1st scenario. The Falcons & Bucs will never trade within the division, never have and never will. NFC South teams hold grudges

dream trade: swape our first two picks for two early pick on day 2 (with Seattle for a QB or Chicago for a WR), so we can pick Travis Jones and Drake Jackson or Tyler Smith with some trade down flexibility in the 2nd rd to gain more early day 3 pick!
just made a simulation on PFF with 5 trades = Travis Jones, Drake Jackson and Kerby Joseph on Day 2 + Zyon McCollum, Jeremy Ruckert and Tyler Allgeier all in the 1st half of the 4th round

Spitfire
Reply to  The Freeman

That’s not a bad idea. If we could trade #27 and #54 for two picks between 32-45 we could come away with 2 solid value players before the true 2nd round talent is gone. I know there are a few teams out there with a plethora of 2nd Round picks after trading their QBs away. It will be interesting to say the least. As long as we end up with 3 solid players from the Draft I would consider it a success.

If Wyatt and Burks are gone then I say trade back if possible.

The Bucs should be thinking of packaging picks together to move up and get three real starters in the first three rounds. Moving back just means a lesser quality of a pick.

It’s sort of like swapping a date to the Prom with a cheerleader for two nerdy girls from the band. Jason Licht hasn’t been averse to moving up or down in the Draft. It’s been a mixed bag of results. None worse than the 2015 (I think) disaster of trading down for Hargreaves and then up for Arguayo with the extra pick. Worked out to secure the choice of Wirfs. If there’s a target or two at #27, who could still be there a few picks down, why not make a trade? But if there’s any risk of losing the… Read more »

It only *theoretically* means lesser quality… but in reality, dropping down 10 spots means you’re probably getting a player of about the same grade… If Licht has a group of guys he really likes that he expects to still be available on a trade back, you’re really losing nothing. *** One of the persistent myths about the draft is that you can really accurately “grade” a player… Grades are useful, but they’re only really for slotting in a general range. *** You can fill more needs with more players. Nobody is suggesting trading away #27 for a slot where they… Read more »

That’s how it should be but it’s definitely not reality. Tristan Wirfs was the last tackle taken in the 1st round and is the best. Winfield was the best safety and he went in the 2nd. Ali Market was the best guard in his class and was our 2nd pick in the 2nd round. There are countless instances. Aaron Rodgers and Russell Wilson come to mind.

The dream scenario that isn’t being mentioned, would be to trade our first round pick to a team like Atlanta or Seattle for their first rounder pick next year. This draft is pretty weak with top end players. IMO there isn’t huge drop offs in talent between position player X that may be rated 5th at his position and the same position player rated 8th. Teams like Seattle and Atlanta should end up with top 10, if not top 5 picks next year and we would be in position to draft our QB of the future. We may have to… Read more »

If a top 15 or so prospect isn’t there at 27 maybe. Only if they are offering a great deal. Personally I doubt the Bucs move back for more picks in a draft that isn’t that great to begin with. I bet they Just take BPA.

There was also the trade down in 2015 or 2016 which resulted in the selection of Hargreaves and then a move up with the extra choice to draft Arguayo. That one didn’t work out so well.

I would only wanna see them move back if we get an additional 2-3rd round pick on top of the 2nd round spot we move to. If we could end up with 2 2nd Rounders and 2 3rd Rounders it would be worth it. Once we start talking about 4th, 5th and 6th Round Picks, although the occasional diamond in the rough pops ups, we aren’t talking about players that stand much of a chance to make the team other than Special Teams. Getting a 2nd and 3rd for #27 may be wishful thinking, but if it is then I… Read more »