Last August the Tampa Bay Buccaneers, the trendy pick to make the playoffs and improve from their 9-7 finish in 2016, arrived in Jacksonville for joint practices with the Jaguars, who were seemingly mired in a perpetual state of rebuilding.

The perhaps over-confident Bucs arrived with the HBO’s Hard Knocks cameras in tow, and most would agree looked the part, capped off by a solid Thursday night preseason victory on ESPN. Bucs fans were pleased and the team was poised to make a playoff run.

Or so we thought.

Instead it was the Jags, coming off a 3-13 season that was the surprise team in the NFL, and ended up just another Tom Brady late fourth quarter rally from playing on Sunday in the Super Bowl.

Former Florida State linebacker and Jaguars Pro Bowler Telvin Smith said the transformation was a process, but his teammates and organization were committed. 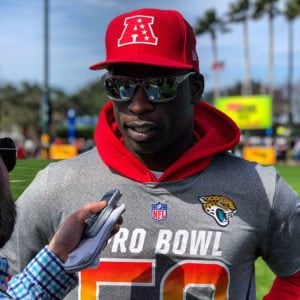 “I am telling you, it is easy when it is happening in the moment,” Smith said. “It makes it even easier when you want it. A lot of guys were hungry. And we had a lot of guys who love ball and wanted to prove themselves. That, combined with a lot of talent and a lot of confidence and a lot of money, will get you to where you want to get to.”

Smith remembers the hype surrounding the Buccaneers when they showed up in Jacksonville last August.

“I am telling you that is how you know this game is crazy,” Smith said. “Everybody saying when they (the Bucs) came in (to Jacksonville) ‘That is a playoff team, they added a couple pieces.’ But it is hard to say. You just have to get the right pieces, and each season is its own. You don’t go into next season saying, ‘Yeah that is the same team.’ Every year it is a different team, a different attitude. You will never have the same guys. But sometimes one guy can make all the difference.”

In fact, it was several newcomers who impacted the Jaguars in 2017, from rookie running back Leonard Fournette, the team’s first-round draft pick who had 1,040 yards and nine touchdowns on 268 carries (3.9 avg.), to free agent defensive end Calais Campbell, who had a career high 14.5 sacks and three forced fumbles, to free agent cornerback A.J. Bouye, who had six interceptions, to new head coach Doug Marrone, who put the Jaguars through a grueling training camp to bring the team closer and increase personal accountability. Smith said things came together slowly at first for the Jaguars, but the commitment from the front office and new executive vice president of football operations Tom Coughlin, also made the difference.

“It most definitely does,” Smith said. “But I’ll tell you something – it starts in the front office, believing and showing the team and organization they can and will put the effort and money into the right guys. And then it goes into coaching, you have to have the coaches that know what they are doing. And then you have to have the good players. You put that together, and hopefully that team comes together, long enough and fast enough to win a championship.”

Do the Buccaneers have those right pieces in place? They certainly didn’t in 2017 given the Bucs’ 5-11 record, but like Smith said, every year it’s a different team. Tampa Bay is certainly hoping for a different outcome in 2018 so it can join Jacksonville in the ranks of being one of the NFL’s surprise teams with a quick turnaround and a long-awaited playoff berth.

Well we certainly didn’t bring in a Tom Coughlin type to oversee football operations. We made one coaching tweak giving Monken full O.C. duties, but is it really much of a change if he isn’t going to call plays on Sunday? Marone changed the culture by tossing the ping bong table out the door, and making the team train, and practice harder, will Koetter do the same? Koetter has already said his practices are tried, and true, that doesn’t sound like any change coming to me. Will Licht finally realize he can’t get away with drafting only two D lineman… Read more »

Pretty sure that the last couple of defensive drafts with the heavy commitment in free agency (Calais Campbell) had just a little bit to do with it. #JMO.

In 2017, Jacksonville added three starters on their DL in Abry Jones (FA), Calais Campbell (FA) and Yannick Ngakuoe (Draft) as well as trading for Marcell Dareus to back up Malik Jackson (2016 FA). They also added Barry Church and AJ Bouye to pair with Jalen Ramsey (2016 Draft) and Tashaun Gipson (2016 FA) at DB. Oh, and they already had Telvin Smith (2014) Dante Fowler (2015) and Myles Jack (2016) from the draft as well. The above is just the amount of talent they’ve added in the last three years, which is extremely impressive (and expensive).

Mac. Yes it did have some to do with it. The main thing was the attitude change and new coaching staff. By attitude I also include the grueling training camp. Its a physical 60 minute game and the guys in tbe best shape will perform the best. Theyre all pro athletes. I’ll admit at the time(camp) I gave koetter the benefit of the doubt as far as his patty came training camp. I figured they were coming off 9-7 and he had his finger on the pulse. Boy was I wrong, and Dirk even more. Cant be friends with the… Read more »

I’m not positive, but I think the Bucs training camp much more resembles the Pats camp than the Jags? Is that a bad thing?? Maybe not, it seems to work well for the Pats. The main issue, tough training camp or not, is the players!!! If you gave Belecheck the Bucs players, and Koetter the Pats players, I bet Koetter would at least make the playoffs, if not more, and Belecheck would not! Maybe he would get us 1 or 2 more wins, but I bet he couldn’t get us to the playoffs. The biggest reasons why teams make it… Read more »

If you actually for one second believe the New England Patriots roster is more talented than the Tampa Bay Buccaneers, I have some water front property to sale you in Idaho. Their consistent success is based solely on an outstanding coaching staff (highlighted by future HOF coach) and being piloted by one of, if not THE greatest QB of all time.

There is a big difference between Confidence and OVERCONFIDENCE.

Confidence is a real tough word to define. Webster, “a feeling or belief that you can do something well or succeed at something.” Do ya think Noah Spence had confidence in training camp that he would improve his game and help the Buc’s pass rush. I thought he would, right up until his injury and he went on IR. Related to football or any sport confidence is just a feeling predicated on factors like injury, hurricanes, suspensions ect. We tend to throw confidence around like its some magical elixir that will single handedly win super Bowls. No my friends, a… Read more »