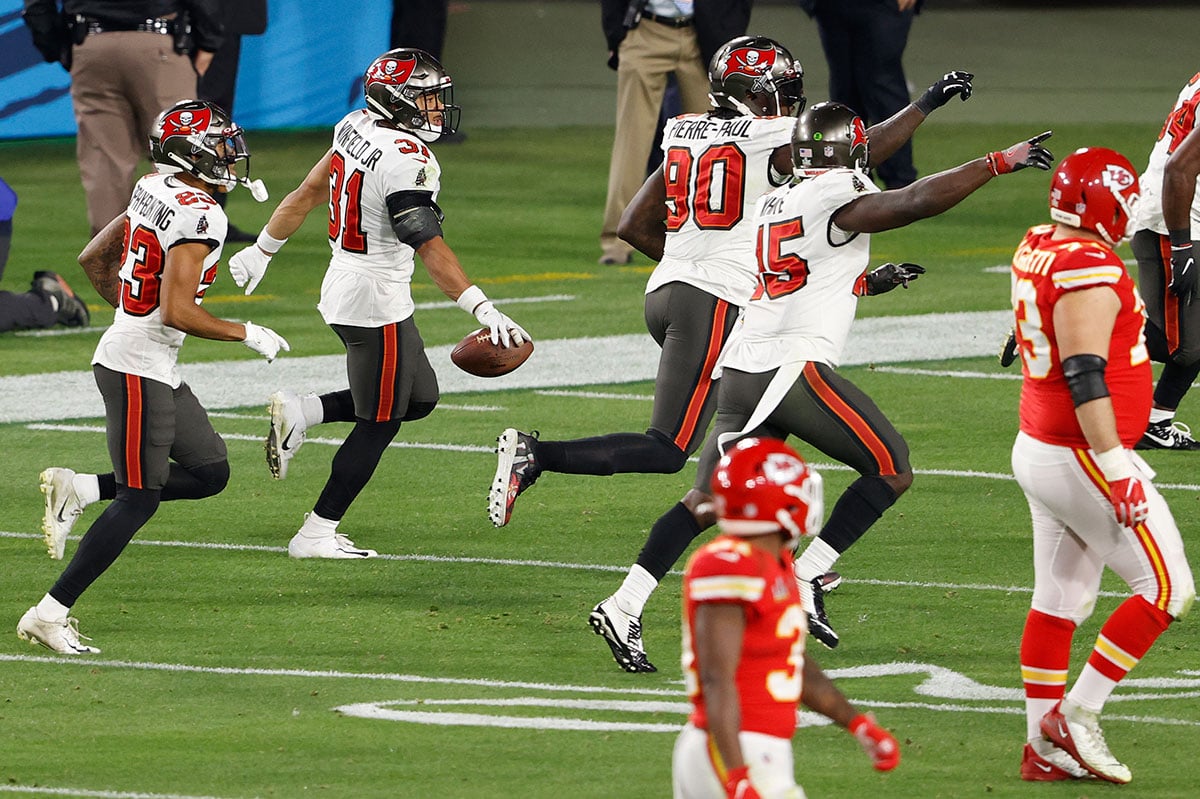 The Tampa Bay Buccaneers are Super Bowl Champions. They also became the first team in NFL history to host a Super Bowl and win a Super Bowl in their own stadium as they beat the Kansas City Chiefs emphatically by a score of 31-9 on Sunday. The Bucs won in a lopsided game by dominating on both sides of the ball from start to finish while Tom Brady won MVP by throwing for three touchdowns. But arguably the most important part of the game was the Bucs’ defense, holding the Chiefs without a touchdown in the contest.

It was a complete team effort on the defensive of the ball to contribute in making the Bucs Super Bowl Champions. Here are the most impressive players from Super Bowl LV.

OLB Shaq Barrett
The key to the Bucs winning the game was getting a four-man pass rush on Patrick Mahomes, and no one got a better rush in the game than Shaq Barrett. He delivered on the high expectations that many had for him facing a backup offensive tackle. The pressure started early on and Barrett kept it throughout the whole game while forcing many errant throws and recording a sack along the way.

LB Devin White
White has loved playing in these big games as he’s continued to be one of the driving forces for the Bucs’ defense and you could see him make his mark, going full speed to make a play. Arguably, you could say White’s trash talk with the team was his best contribution as no one on the Bucs’ defense was more vocal than him. He ended the game first on the team in total tackles once again with 12, while also leading the defense with two tackles for loss. White ultimately finished the game near the end of regulation with an interception to close out the Bucs’ Super Bowl  win.

LB Lavonte David
David made his presence in multiple areas for the Bucs, including breaking up two passes  from Mahomes. Not many thought the Bucs’ defense would be able to stop the Chiefs from scoring a touchdown in the entire game, and that doesn’t happen without the leadership of David. There was a great blitz David made in the middle of the third quarter that led to an Antoine Winfield Jr. interception.

S Antoine Winfield Jr.
The first player to get an interception for the defense on the night, Winfield did much more than just his interception in the second half. Not only was he an important factor in why the Chiefs didn’t connect much on deep passes down the field, but Winfield also tied for the team lead with two pass breakups, recording 6 tackles as well. The interception he made was an athletic diving catch that had the entire sideline exuberated and helped set up a field goal on the next drive. Winfield was penalized for taunting Tyreek Hill after the Bucs stopped the Chiefs on a late fourth down play, but we’ll say that was his competitive nature getting caught up in the moment. When you’re up by that much and ready to win the Super Bowl, its tough not to get a little cocky.

S Mike Edwards
The pick for Winfield doesn’t happen without Edwards’ play. Labeled a ballhawk by Bruce Arians, Edwards had his hand in a number of plays tonight, making things difficult for the Kansas City offense.  Edwards batted a Mahomes’ pass at least seven or eight yards back, leading to the interception. A major difference that went the Bucs’ way in this game was the coverage they had on the Chiefs’ skill players. The Bucs had more safeties back to help shut down the big play and Tyreek Hill’s ability. They executed their plan well.

DT Ndamukong Suh
We don’t know what the future holds yet for Ndakumong Suh, but what a swan song to go out on if this is indeed his last game. Suh finally won the Super Bowl after a long career that includes losing in the Super Bowl two years ago to his now teammate Tom Brady. This time around, Suh was a huge reason why the Bucs continued to cause a ton of issues for the opposing offensive line while making Mahomes throw the ball away when he didn’t want to. Suh led the team with 1.5 sacks and had a great game from start to finish.

Vita definitely makes the difference for this team. The best nose tackle in football and it’s not close.

I agree Vita pushed the pocket back all night. Suh was awesome though!

I saw Vea lined up at DE several times tonight with JPP kicked inside. This was a defensive masterpiece. I cant wait for the breakdown of the film.

they certainly should but he may be retiring. hes had a good career. and if he does than DT is exactly what we’ll have to draft in the first rd

I agree. Suh has another season in him for sure. He still is a beast out there and must be accounted for on every play! Let’s run it again it’s!

You can add the whole defense but I would especially add Todd Bowles. The gameplan was perfect. Nothing could be coached better

Always thought Suh should’ve been a Buc and was disappointed the Lions drafted him and we got stuck with McCoy. I’m glad he finally won the big game in pewter and red.

Let’s not forget Leftwich as well.

You could list 11 guys here plus Todd Bowles. Co-MVP’s last night – TB and the TB D. Monte, Warren, John, Derreck, Rhonde, Simeon and the gang had to be smiling the whole night.

Yeah I don’t know how you can leave Vea off the list. Every single play, he was pushing his guy back 10 feet, then throwing his guy aside to chase Mahomes. What a ridiculously dominant performance by the big man! It looked like an Alabama DT going up against a backup lineman for Mississippi Valley St. Dude hasn’t gotten anywhere near enough credit. If he doesn’t come back for the playoffs, I don’t know if we’re SB champs right now. He’s the key piece on defense

He definitely played as if he was well rested and had plenty of gas in the tank!

Thing of beauty! Had his guys on wheels all night!

At this point, you have to put our whole defense on this list. I’ve never seen Mahomes play a worse game than last night. 0 touchdowns to that vaunted chiefs offense? Unreal.

It’s only fitting that the Buc Defense came out and shut down the KC Offense. All week long we mostly heard about Brady v Mahomes. Our Defense has been underrated all season long. Strange that when they did mention our Defense, I often heard them mention everyone but Vea??? What a stroke of luck getting him back when we did. This Buc Defense beat the passion out of KC. U could see it in their eyes. KC was on their heals all game long. A masterful effort indeed!

Agree. The announcers were catering to Joe public that watch only the ball and the qb.

Vea was in Mahomes’ face several times with tremendous “push”.

You can basically put the whole defense on that list! I agree, Vea was a beast out there last night.

Come on man, you guys should know better than the National Media who even understands that Winfield Jr.’s taunt wasn’t just his competitive nature getting the best of him and we will just forgive it. That was him giving it back to Hill for the entire Defense and it was well deserved. Hill Peace signed twice, backpeddled into the end zone and back flipped into our end zone in week 12. That never left the mind of our Defense and like I said I hoped Bowles played that backflip on repeat the entire two weeks. So when the game was… Read more »

ABSOLUTELY!!!!!!! I loved Winfield rubbing Hill’s nose in it like that. Every Bucs defensive back on the field should have joined 31.

Hill likely learned a valuable NFL lesson: Taunting other players when you’re on top early can come back to bite you on the ass later.

Seriously. Thinking back on the game, Antoine Winfield squatting down and sticking that peace sign in Hill’s face as he lay on the ground was the very best part of the game.

I will forever love him for that moment.

Add two more votes.. Bowles should be on the VERY top of the list. Putting together a game plan that was so contrary to the way he prefers to play, sending 4, minimizing blitzes and putting a cap on the top of the field while still using the linebackers to shunt the running game and minimize the middle of the field was just an amazing job of coaching. And VEA.. come on, he changes EVERYTHING. Single team him and he will just walk whoever is blocking him back into the QB or toss him aside if it is a run..… Read more »

I feel bad for devin white. He deserved mvp much more than T. Brady. White was a wrecking ball all game and set the tone for the defense. Shame to see the nfl play favorites instead of giving it to the young guy who stuck a dagger in the heart of the chiefs offense

This easy to answer. We won the Super Bowl, Enough said!