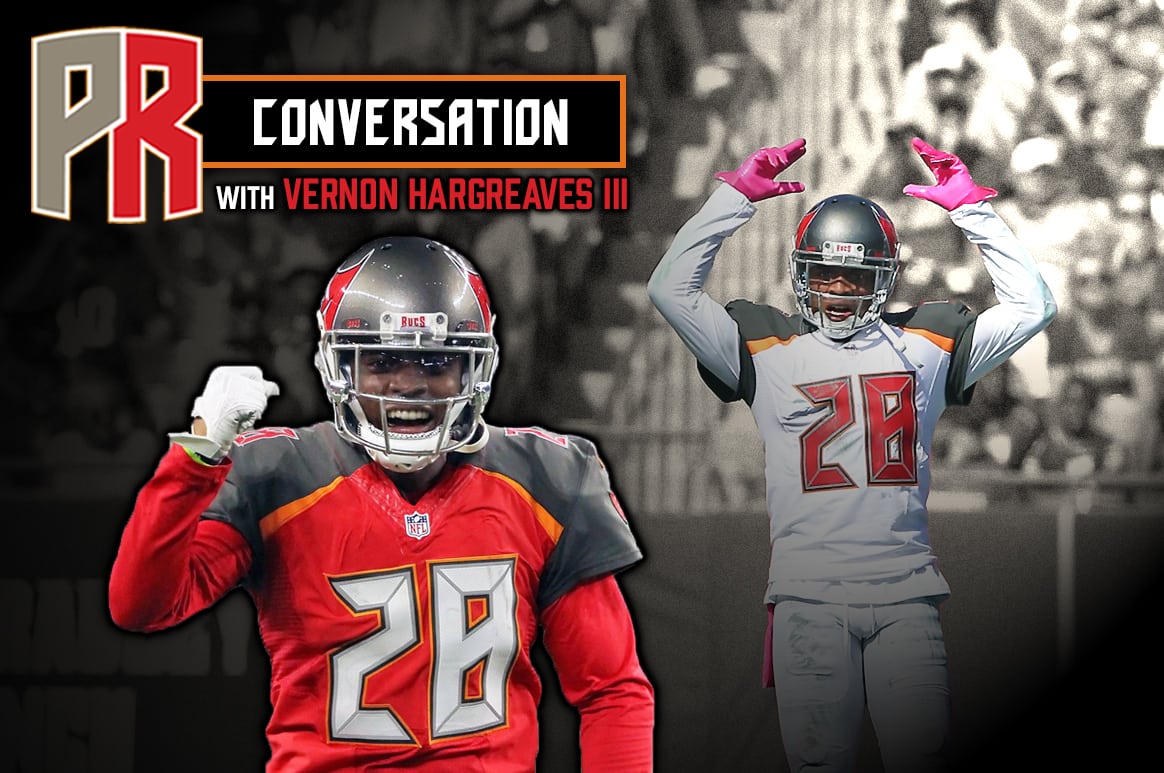 The Pewter Report Conversation is a monthly feature on PewterReport.com where publisher and veteran Bucs beat writer Scott Reynolds hosts an in-depth conversation with a newsworthy Tampa Bay Buccaneer.

This month’s PR Conversation subject is Bucs cornerback Vernon Hargreaves III, who is battling back from a disappointing second season in the NFL that was cut short due to a midseason hamstring injury. Hargreaves, who is Tampa Bay’s 2016 first-round pick, is trying to avoid the “bust” label and use a great offseason and a promising start to training camp to hold off rookie M.J. Stewart for the right to start in the slot as Tampa Bay’s nickel cornerback.

Reynolds spoke with Hargreaves prior to the Bucs’ preseason opener at Miami.

You’re having a really good training camp, Vernon. I know the laceration on your leg set you back a little bit, but tell me about your mentality this offseason. You seem to have renewed sense of confidence.

Grown up in what way?

“On the field – not playing up to expectations teaches you a lot and humbles you. I’m just learning a lot, seeing a lot, going through it and getting some more experience is making it more comfortable.”

Being from Tampa and then driving up I-75 and going to Florida up in Gainesville and then back to Tampa for your NFL career, has there been any added pressure on you to succeed because you are from around here?

“No. For me, I don’t like to travel, so it was perfect, staying close. That part, not too much. I’m from Tampa but I don’t have immediate family here. I moved here in 10th grade, so it’s not necessarily I’m from here. I have roots here, but it’s good. I love being home and I love being here.”

Keith Tandy was telling me the other day that you know this defense so well now that you are teaching it to the younger players. That’s really the sign of you knowing something – when you can teach it.

“You know, it’s all respect. When I came in my rookie year I had a bunch of older guys that did nothing but help me learn and I learned from them. Keith Tandy, he knows the defense. He installs defenses for us. That just shows what kind of guy he is, so for him to say that about me, it means a lot to me. But I learned from him. I learned how he took care of the younger guys, everybody that comes in, whether it’s a safety and someone at his position, he always takes care of them and makes sure they know what to do. I try to be my best Keith Tandy.”

Maybe your biggest fan – aside from your parents and the guys that drafted you like Jason Licht – is Ronde Barber, who is a Bucs legend. He’s been a guy that has been high on you since you declared for the draft. He wanted the Bucs to draft you and he’s still high on you to this day.

“I can’t say enough about him. Nothing but love, nothing but help. It’s rare to find people that genuinely want to help you and that genuinely cares for you. Ronde Barber … I don’t even know what to say. I hate even speaking about him because I don’t feel like I’m saying enough. He’s a Hall of Famer. I don’t need to speak on him, but we’ve been getting together and working and he’s helping me, been helping me a lot and helping me grow. Hopefully it pays off for me.”

You’ve done some one-on-one work with him?

“Yes, I have – a few times. I won’t get in to too much detail, but we’ve had some time together watching film and working. He’s special.”

How special is that for you? He’s not like a guy where you have to twist his arm, either. He’s a big fan of yours.

“Exactly. It’s not like I have to call him, and call him. He’s calling me. He’s asking me when he can meet with me, which is amazing. It’s cool, I love it.”

I covered Ronde when he played for the Bucs. I’ve covered this team for over two decades, so I saw him come in as a rookie in 1997 and he wasn’t really “Ronde Barber” until maybe 1999. Brian Kelly, who was drafted in 1998 wasn’t Brian Kelly until 2000. Do you know what I mean?

“You know it’s funny. He always tells me that. He says, ‘Don’t worry. Just keep working, just keep working,’ and I’m listening. I’m listening to him. I’m hearing him and getting there, trying to get to that next level and trying to push it. Time heals all and I’m ready, I’m being patient and I’m taking advantage of my opportunities.”

You’re a young guy and I know you’re not on social media, but you are aware. You are an aware guy. You’ve gotten to know some of your peers and some of these young guys entering the NFL. When you have a guy like Marcus Peters burst onto the scene as a rookie, or a guy like Marshon Lattimore last year, it kind ofmakes it unfair for all of the other cornerbacks who get drafted because that’s one corner out of maybe 20 that get drafted that has that type of season.

“Yep, you just said it. Those guys, Marshon Lattimore, Marcus Peters – they came up and they blew up. They had great years. It just goes to show you how hard this position is, and how skilled you have to be. Those guys play excellent. They play way, way above their level and way above any level a rookie should play on. That’s good, though. That raises the competition around the league and I’m excited for them. I’m excited for it because guys get paid next.”

Does it really help you even more working with Ronde because he was a guy that was the prototype nickel cornerback and that’s a position you’re now playing?

“He played nickel. That’s where he makes his money and it’s new to me. I played it my rookie year, but that was my first year every playing inside, so it’s new to me. I’m still gaining knowledge about it. But he knows how to be successful at that position.”

He was the original nickel cornerback.

“Exactly. I’m just taking from him, and whatever he can tell me, I’m listening and trying to apply it to the field.”

How do you tune out the noise, Vernon? There are a lot of high expectations that come with being a first-round pick and there has been some criticism of your play thus far. “One thing about me is that I know there are expectations. Everything that’s happened to me has been deserved. I’ve earned getting benched, if that’s how you want to put it. I’ve earned that. That’s what I put on the field. My production wasn’t where it needed to be to be a first-rounder – I understand that. There are no hard feelings toward anyone. I actually told Coach Koetter, ‘Thank you, I appreciate that.’”

You thanked him for his criticism of you?

“Yes, that’s one of the first times in my career that I’ve ever had a coach criticize me publicly, but Coach Koetter isn’t coming at me, it’s not personal. It’s all just trying to get me better, and I love that. I met with him, I talked with him and I told him, ‘Thank you. I wouldn’t want it any other way. I wouldn’t want to play for any other coach. I don’t want the soft stuff. I want it exactly how it is. I’m working. He’s proud of me, he sees me working, he sees what I’m doing and hopefully none of this matters until September 9.”

What was tougher for you, playing against Minnesota in Week 2 when you were under siege in the secondary, or beginning to play well inside at nickel right before you got hurt and then placed on injured reserve and not being able to finish the season?

“I would definitely say the Minnesota game – that was the toughest. No one got it going, but as a secondary we have to be better. We understand that. We’re past that now, but we’ve all grown from that – coaches and players. Like I said, we’re moving on but nothing matters until September 9, 2018.”

Did you get shell-shocked in that game? Playing a little too far off the line after that game?

“A little bit, but I play football, so I understand what it’s like to be beat, I’ve been beat before. It sucked to play that bad more than being shell-shocked.”

The arrow was pointing up for you after you moved inside to nickel. You were playing better with solid games against Buffalo and Carolina before you got hurt.

Do you like playing inside more because when you are inside in the slot you have to play closer to those receivers? If you don’t get your hands on a slot receiver and re-route him and give him a free release he’s gone, right?

“Right. There’s a little more technique, you need to know the defense a little more. Playing man-to-man, when you’re playing inside the slot, 90 percent of the time you can press and you can get your hands up on guys, but either way, inside or outside, if I’m close up on the line of scrimmage it gives me a better chance.”

I know you are itching to get some more interceptions.

But Drew Brees was not a bad guy to pick off for your first one, right?

So what are your personal goals heading into your third season?

“I usually don’t say too much and go into too much detail – but no goals. I tried the ‘goals thing,’ I tried to put up what I wanted to do and it didn’t work – so no goals. No goals. I’m just playing football and having fun – doing what I usually do.”

Hargreaves is one of the guys who could make a huge difference this year. Either way with all the additions on the D line, our safeties and corners will look better. Add in a reliable kicker and we should easily win 8-10 games. I have bet already over 6.5 wins for the season and plan to make a killing on the first few games. Bucs are 9.5 point underdogs at New Orleans. No way…

This might be my favorite player interview I’ve read in awhile. Scott came across as a friend to a guy who really seems humbled. I hope his natural ability, renewed work ethic and the position he’s put in all line up to equal a solid player in this league. I can honestly say I want that for him after reading this.