Bucs Coverage Scheme Changed Due To Injuries In 2021

Home » Articles » Bucs Coverage Scheme Changed Due To Injuries In 2021 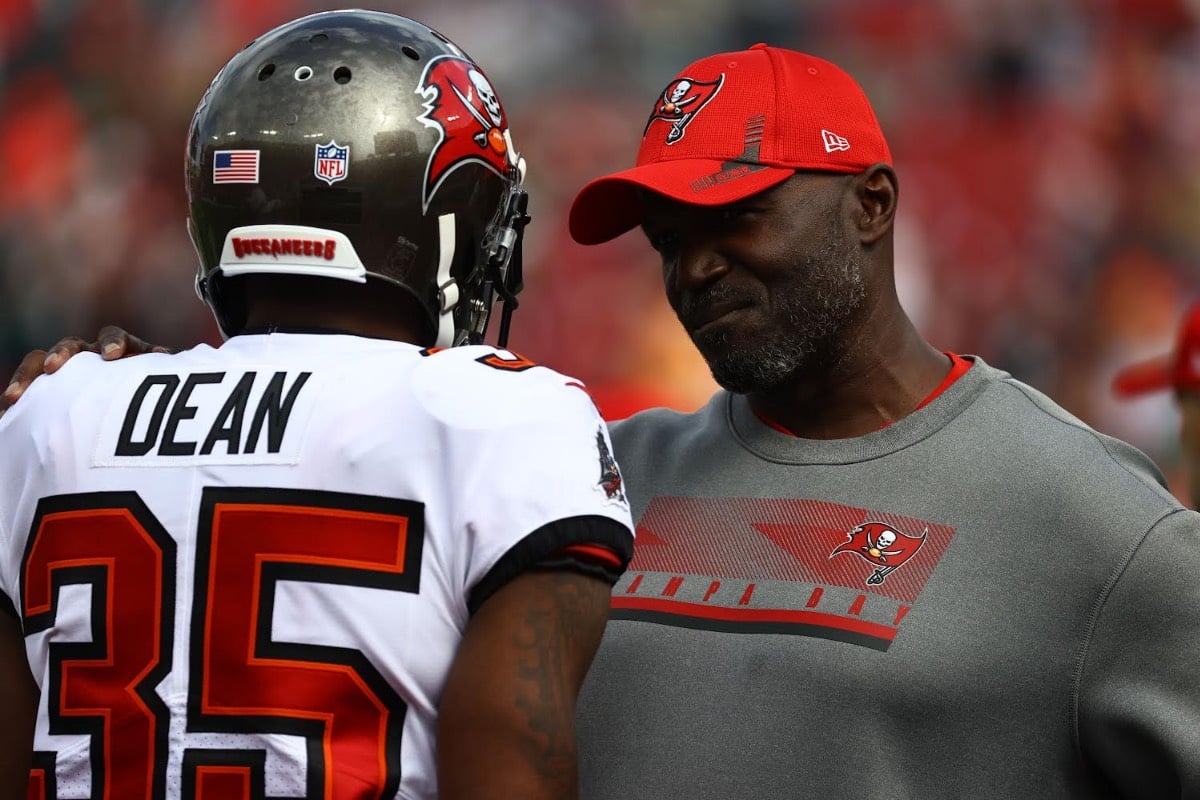 Bucs Coverage Scheme Changed Due To Injuries In 2021

Home » Articles » Bucs Coverage Scheme Changed Due To Injuries In 2021

Last week, Bucs GM Jason Licht joined the “Schein on Sports” Sirius XM radio program. On the show, Licht was asked about last year’s defense and how it compared to the year prior. Of course, it’s difficult to compare the two years given how banged up the Bucs defense was in 2021.

“Well, we experienced a lot of injuries last year on defense,” Licht said. “Particularly in the back half [of the season]. And that really altered the way [defensive coordinator] Todd [Bowles] and the game plans had to be, playing with a lot of different players at corner. Really kind of hurt us initially. But to still finish the season at 13-4 is a credit to the job that Todd and his defensive staff did. And [head coach] Bruce [Arians] holding it together.”

It is no secret that Tampa Bay’s secondary suffered more than its’ fair share of injuries. Altogether, the unit lost a combined 42 games to injuries. 23 of those were to starters. With that many injuries, the team ended up deploying 12 different players in their secondary. These injuries made for 13 different combinations of players taking the three highest snap counts at corner.

How did this affect the Bucs’ coverage scheme? I dove into the data to find out.

Looking at the breakdown above, you will see that when Bowles had his No. 1 cornerback, Carlton Davis, he stuck to his 2020 strategy almost to a ‘T’. Bowles executed similar game plans when he had Jamel Dean in the lineup. With Sean Murphy-Bunting, Bowles leaned into his single-high, Cover 3 tendencies even more. And that’s where the crux of Todd Bowles’ defense seemed to lie last year. With Murphy-Bunting. Let’s look at the defense’s coverage splits with SMB and without.

The defense had its largest coverage splits related to Murphy-Bunting’s presence in the lineup.

Looking at the coverage rates over the course of the season you get the following line-graph (Orange denotes two-high looks, while Blue denotes single-high): 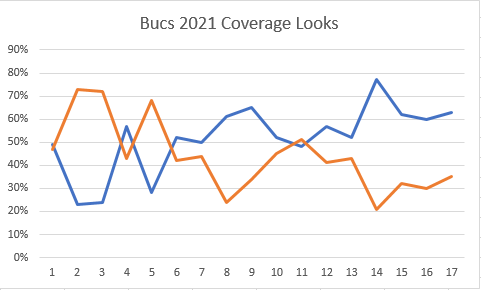 The team lost SMB early in Week 1. Immediately they started running more two-high looks. Now look at Week 12 and beyond (position 11 on the graph). Notice how the single-high looks spiked and two-high looks plummeted. I’ll give you one guess as to why that is. SMB returned to the lineup in Week 11. It looks like Bowles gave him one week to get his feet back under him and then they were off to the single-high races!

How does this relate to the team’s off-season strategy? The signing of Logan Ryan seems very interesting when looking through the prism of this coverage data. Ryan has been at his best when playing in the slot. Last year the team transitioned away from Ross Cockrell in the slot after SMB went down and moved toward Mike Edwards. With that transition came a seeming need to move away from Todd Bowles’ preferred coverage looks. Ryan’s signing provides the team with more depth at slot corner that will most likely allow the team to weather injuries without having to alter their game plans as much.

Per @PFF, here is how Logan Ryan has graded in the slot vs at free safety since 2019 season

Overall, Bowles continued to operate Cover 3 as his primary defense, but adjusted his complimentary looks to the personnel available to him. Those alterations shouldn’t be as drastic in 2022, thanks to the addition of Ryan to the secondary.

IMO, we need to draft a corner on day 2, maybe McCrary out of Auburn in round 2, or smoke Monday in round three. I think this should be the highest prioriority outside of D tackle if one is available in the first round. Sean Murphy Bunting regressed towards the end of the season when he was available, re-watch the Rams loss, blantantly missing tackles, giving up tackles on third down and of course letting Cooper Kupp juke him so bad he fell down at the end of the game. We need to improve dramatically to have a chance in… Read more »

Edwards may have looked the most lost vs. the Rams.

The graph is like pure contrast! Injuries aside…Rams playoff game. Bad discipline and communication in the secondary. Everybody but Davis comes cheap still comparatively to a quality veteran. Logan Ryan helps for a year. They will get a safety. If CB Gordon is there in round 2, $! Or CB Kendricks from Georgia round 4.

Good article. Regardless of coverage schemes though We need to blitz less. We need better CB play, and we need a better pass rush.

I have really been hoping that the change in Defense last year was solely due to injuries. That still doesn’t explain Bowles play call to end the Rams game, but I really hope we get the right personnel and backups this year (along with staying healthy) to be able to really get back down to business like 2020.

biggest issue is Todd Bowles who wants that big nickelback… and watch SMB start over Ryan all year no matter who bad he play… sad to think only an injury of SMB could help this team in the slot! if you want a good nickelback, 2 of the best NFL slot guys of the last decade are still available on the FA market (Chris Harris Jr and Bryce Callahan)… or you can draft a Trent McDuffie (1st rd), Roger McCreary, Kyler Gordon (2nd rd), Marcus Jones (3rd-4th rd) but Bowles probably don’t want any of them cause they are 5’9-5’11… Read more »

My goodness, all you folks want to talk about is the 30-27 Rams game loss, and in particular, the play leading up to the FG. How about just a smidge about the Eagles game the week prior or the 13 dash 4 season when the secondary, you all want to say “stunk” or “sucked”, was constantly dealing with injuries? Is that even a consideration when evaluating the group? Think missing JPP’s pass rush the entire season was a factor? How about the fact that the Rams are pretty good?

Their logic of attacking the defense but saying nothing about the offense that played from behind all game and failed to score 30+ points is of course not logical at all. It always takes an entire team to get a win, or a loss.

Good article–eye opening! Based on this article I would like to ask the author who Bowles/Licht should draft in regards to defensive back. And why. Josh please do a follow up on this. Josh can you do a breakdown of our pass rush and who we should draft (exclude the top prospects as we are #27 and will not have that opportunity.