The projected Bucs’ 2021 win total is out. In fact, the win totals for all NFL teams, including Tampa Bay, are coming out via prominent Las Vegas sportsbooks.

One such gambling site is ActionNetwork.com, which lists the DraftKings Sportsbook having Tampa Bay with a projected 11.5 win total in 2021. That’s the highest win total for any NFC team, and the second-highest mark behind Kansas City, which is projected to win 12 games. The Bucs, which finished 11-5 last year, beat the Chiefs, 31-9, in Super Bowl LV to conclude the 2020 season.

The predictions take into account the NFL’s new 17-game schedule.

Baltimore is right behind Tampa Bay with 11 wins, followed by Buffalo, Green Bay, the Los Angeles Rams and San Francisco with 10.5 wins. The Bucs beat the Packers, 31-26, at Lambeau Field in the NFC Championship Game last year. Tampa Bay lost at home to Los Angeles last year on Monday Night Football, 27-24. The Bucs are set to play the Rams again in 2021 – this time in L.A. 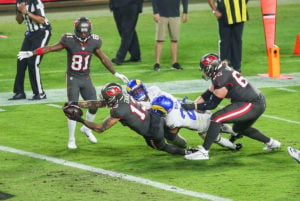 Tampa Bay is atop the NFC South according to DraftKings Sportsbook. New Orleans is projected to win just nine games in 2021. The Saints won the division the last four years with a 12-4 record for the third straight season.

Carolina is projected to finish third in the NFC South win 7.5 wins, followed by Atlanta with seven victories. The Panthers finished 2020 with a 5-11 record in Matt Rhule’s first year as head coach.

You go to a 17 game season, add in a full training camp, pre-season games and the full 22 starters returning and only up the win total by half a game?? I don’t call that setting the bar high !! Bucs fans will be disappointed if we don’t at least win 12. Brady will be locked and loaded for the 1st game. No learning curve for him or his receivers this year.

I hope we can give Brady a safety valve in AB or Edelman. To move the stick to avoid frequent three and out. Otherwise we wear out the defense too quickly.

Excluding any injuries, draft sleepers, and that the Bucs get more coherent after the offseason, I think 11.5 wins is low. The heavy-hitter teams to watch are the Colts, Bills, Rams, Washington. I genuinely believe the Bucs can sweep the rest of the NFC East (maybe the Giants can surprise) and AFC East. Maybe split with New Orleans. I think 12-13 wins is possible.

11 wins again Seems bit low to me as unless injuries etc. I would think 12-14 is doable with 17 games and the continuity and starters all here from last season…

I think 7- 9 wins for New Orleans and we sweep them this year on way to division title.

Only 11.5 wins, and we’re on a roll after putting it altogether the last part of the season last year? We’re playing an easier schedule and will be building even more on the effectiveness of our offense which was scoring 30 plus against anyone and everyone we played.

Commenters – the Vegas line is not a prediction of how many games the Bucs or anyone else will actually win. It merely sets the line – betters will bet that the Bucs will win more, or fewer games than the line, and reality will determine who wins and who loses. It is not a prediction.

As long as the head coach can scheme to the strength of the players’ talent and not force “biscuit” on his team to satisfy his own ego, we will be great.

That “ego” and scheme put a biscuit in the trophy case called the Lombardi Trophy.

Anything can happen in one regular season in the NFL. Football is a humbling game,getting out of camp healthy is challenging & we will be the hunted this season. Get in the playoffs with a healthy team. I believe we win it all again. Go Bucs!