Wild Card Round Most Impressive: Bucs vs. Eagles

Home » Articles » Wild Card Round Most Impressive: Bucs vs. Eagles 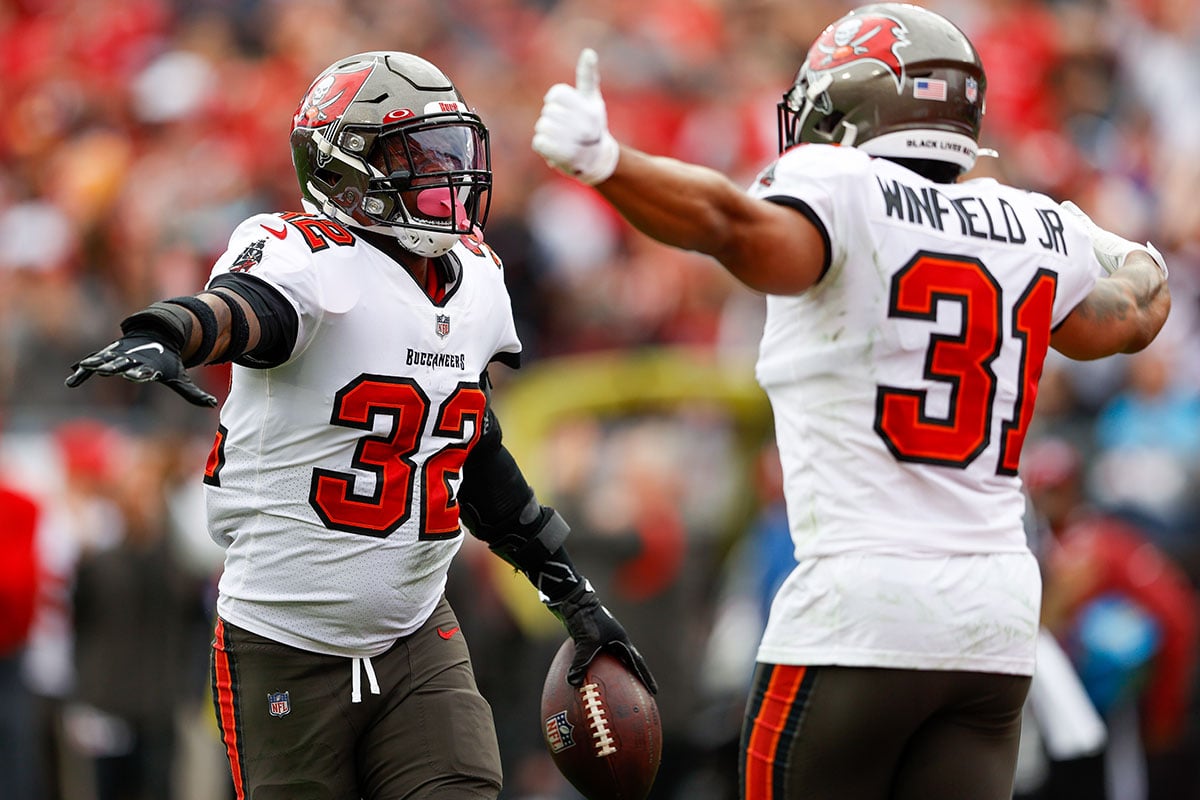 Wild Card Round Most Impressive: Bucs vs. Eagles

Home » Articles » Wild Card Round Most Impressive: Bucs vs. Eagles

The Bucs opened up a huge, 31-0 lead over the Eagles in the second half of Tampa Bay’s 31-15 Wild Card playoff win at Raymond James Stadium. Tampa Bay’s offense had another big day from quarterback Tom Brady and wide receiver Mike Evans, who scored his fourth touchdown in the last three games. Led by safeties Mike Edwards and Antoine Winfield, Jr., the Bucs defense rose to the occasion and forced two Jalen Hurts interceptions and sacked him twice.

The Bucs advance to the Divisional round of the playoffs and will host a playoff game at Ray-Jay next week, depending on the outcomes of the San Francisco at Dallas and Arizona at Los Angeles Wild Card games.

Here are this week’s most impressive Buccaneers:

Brady started the game hot, completing passes to nine different Bucs weapons by the second quarter. The 44-yard quarterback was sacked three times in the first half, but when he wasn’t on the ground he was completing 20-of-25 passes for 159 yards by halftime. Brady threw his first touchdown on a 2-yard play-action pass to Rob Gronkowski to give the Bucs a 24-0 lead in third quarter. His second touchdown pass came on a 36-yard strike to Mike Evans to give Tampa Bay a 31-0 lead. Brady finished the game completing 29-of-37 passes for 271 yards with two touchdowns and no interceptions. Evans got into the action early with two catches for 10 yards on the first drive, including an 8-yarder to move the chains. Evans had six catches for 61 yards by halftime, and then hauled in a 17-yard pass in the red zone to set the Bucs up at the Philadelphia 2-yard line. Tampa Bay would go up 24-0 on the next play. Evans added to the scoring himself on the next series, catching a 36-yard pass and vaulting into the end zone in the third quarter. That reception put Evans over 100 yards for the day and the third time this season. Evans finished the game with nine catches for 117 yards and a TD.

Edwards got the start at nickel cornerback in place of the injured Sean Murphy-Bunting and had a huge day. Playing in the slot and also at safety, Edwards led Tampa Bay with nine tackles and also had a clutch interception of Jalen Hurts in the second quarter. When Jamel Dean fell down in coverage, Edwards raced over from his safety spot to step in front of DeVonta Smith in the end zone for a key INT. Edwards led the Bucs in tackles with nine.

Winfield was an effective blitzer, notching a sack on Hurts in the second quarter and nearly getting another one right before halftime. He had five tackles on the day and one of two sacks for Tampa Bay’s defense.

White started the game on a tear, with a great open-field tackle on running back Boston Scott for a 1-yard gain on a reception, setting up a third-and-2. Then on the next down, White and safety Jordan Whitehead teamed up to tackle Jalen Hurts for a 3-yard loss to force a punt. White played under control and looked comfortable on Sunday with the return of Lavonte David. He finished with five tackles, one pass breakup and three QB hits on blitzes. Whitehead teamed with White to tackle Hurts for a 3-yard loss to end the Eagles’ first possession on third-and-2. Then Whitehead made a nice 5-yard stop on Miles Sanders to set up a second-and-15 on Philadelphia’s second possession, which ended in a punt. Whitehead finished the game with six tackles.

Dean and Davis were quite good in coverage and also in run support. It was probably one of the best games Dean has played in during his three-year NFL career. He finished with seven tackles and a pass breakup. Davis nearly had three interceptions, but dropped them. He finished with five tackles.

Bernard was a key player on the Bucs’ first touchdown drive. He caught two passes for 15 yards and then scoring his first rushing TD of the year with a 2-yard plunge. Bernard came through with a 22-yard catch-and-run on a screen pass. That play helped set up another Bucs touchdown. Bernard had a season-high 44 yards and a TD on 13 carries, in addition to five catches for 39 yards on the day.

Vaughn, who started in place of the injured Leonard Fournette, got his day started with a 17-yard, tackle-breaking run on his first carry. On the Bucs’ second possession of the game, Vaughn scored a touchdown to give Tampa Bay a 14-0 lead in the first quarter. Vaughn moved the chains in the second quarter with a 5-yard catch and had two catches for nine yards and 41 yards rushing at halftime. He finished the game with 53 yards on 17 carries. Miller made an impact special teams play in the third quarter, forcing a fumble with a hit on Jaelen Reagor, which was recovered by defensive back Ross Cockrell. That was a big, momentum-changing play, as Tampa Bay scored a touchdown on the next play.

Barrett returned to action from a sprained knee and came up with a huge play in the third quarter. Although he was pretty much owned by right tackle Lane Johnson as a pass rusher, Barrett dropped in coverage and tipped a Hurts pass to himself for a big interception that changed momentum. That was Barrett’s first postseason pick and the third of his career. Barrett had one in the regular season.

If you list White & Barrett, I would have included Davis as he helped both those guys.
Jensen was impressive to come back in. Wriff too.

Not sure about Wirfs coming back in for two plays. I hope that he didn’t make it worse than it was by doing that.

I thought the same thing, but we aren’t Doctors and they cleared him to go try it out.

Tristan Wirfs was clearly hobbled, the medical team is quick to allow these guys back in–hope it is not worse now, any Scotty Miller is an asset on special teams–impressed with the entire defense and mike Evans–he was great today!

Lots of injured guys go back in with ankle and back issues.

Most Impressive: The offense’s consistency in the playoffs with Brady. Brady has now played 5 playoff games with the Bucs. They have scored exactly 31 points in 4 of the games and scored 30 in the other one. That’s uncanny.

How about Anthony Nelson? Of the 22 pressures we had Nelson led the team with 7 alone. He’s really shined lately

Good point, Nelson has definitely been a bright spot. Vaughn has also shown he’s a clear upgrade over RoJo which bodes well for the team next year.

Bradley Pinion did a good job punting and Succop made all of his kicks again. Seems our “idiot, imbecile, or is it moron, coordinators, did at least an “average at best” job preparing their respective game plans.

Most pleasing to me was the mindset of our entire team entering this contest. From the very start it was if they were saying, “Not today Punk” to the visiting Eagles. I guess they were inspired by Brady’s intro on the jumbotrons, “Let’s f%$&ing go! Hope none of the snowflakes were offended.

Scubog, didn’t see a large group of Eagle fans on TV that made me smile!

When we have nearly the entire defense, but for Murphy-Bunting, on the field, they’re pretty damned good!

First, let’s go Bucs! Great team win, really excited for our divisional matchup against either LA or AZ. Overall, I like this list, but don’t think White should be on here. I thought he didn’t play poorly, but not worthy of top performance designation. I know we were already up and had effectively sealed the game, but the Eagles first scoring drive was spurned by two poor plays from D. White himself (one being him missing the hit and actually knocking AWjr off the tackle). I hope we see him elevate his play, and will give him the benefit of… Read more »