Will The Bucs Be Double Dipping In This Year’s Draft?

Home » Articles » Will The Bucs Be Double Dipping In This Year’s Draft? 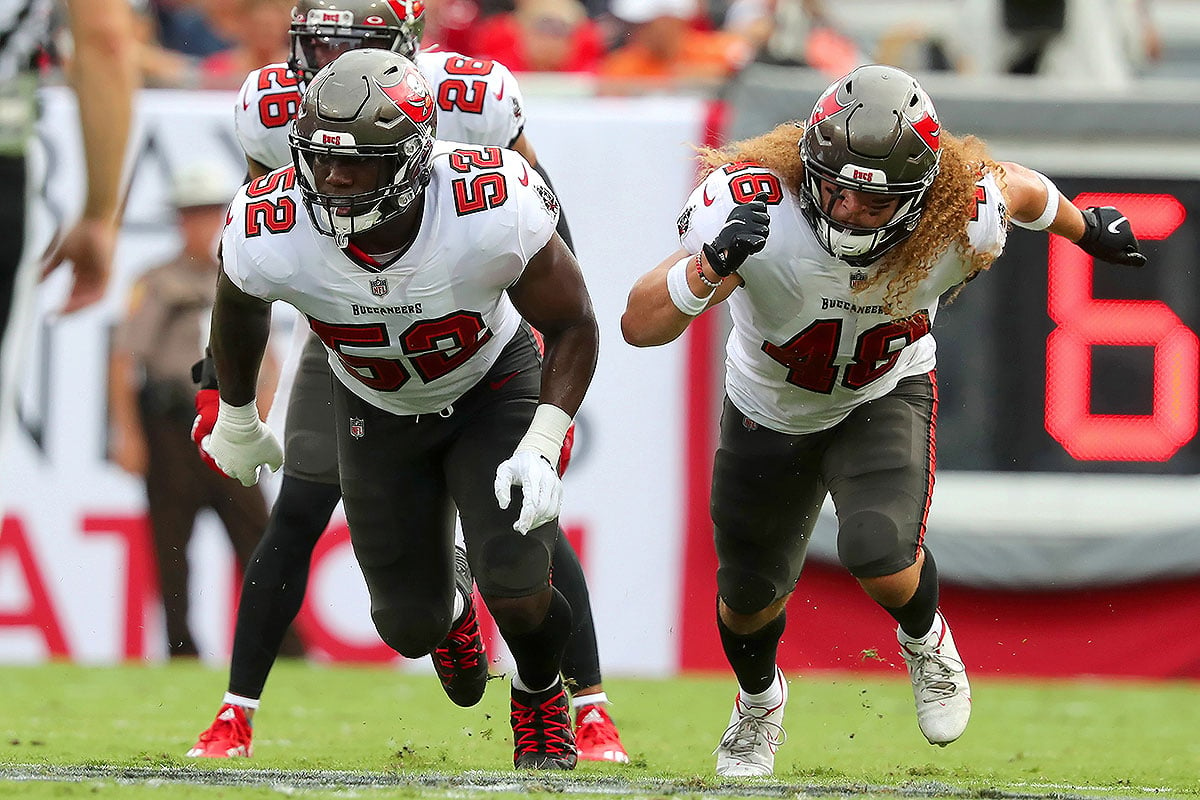 Will The Bucs Be Double Dipping In This Year’s Draft?

Home » Articles » Will The Bucs Be Double Dipping In This Year’s Draft?

Bucs general manager Jason Licht believes in flooding certain positions in the NFL Draft with multiple picks. Since his first draft in Tampa Bay in 2014, Licht has doubled up at the same position a total of nine times in eight drafts.

That year starting with Mike Evans, the seventh overall pick, he drafted two wide receivers and also two offensive linemen. Most recently, Licht doubled up on inside linebackers last year, drafting K.J. Britt in the fifth round and Grant Stuard with the final pick in the seventh round.

Could he double up again at a certain position this year? It’s quite possible.

Before we reveal which position Tampa Bay might flood with multiple picks, here is a list of all the times Licht has selected two players from the same position since 2014.

So which position could use two or more players in this year’s draft? Look no further than tight end.

The Bucs only have two on their roster in Cameron Brate and Codey McElroy. Brate turns 31 in July and the 29-year old McElroy has been on the practice squad for years. He’s not a lock to make the team by any means. The belief is that Rob Gronkowski might re-sign with the Bucs prior to training camp, but so far he’s been non-committal about returning to football. Injuries have taken their toll on the 33-year old’s body over the years, and he already retired for one season in 2019. Gronkowski came out of retirement to help Tampa Bay win a Super Bowl in 2020, but then missed five games last year with broken ribs and a punctured lung.

Even if Gronkowski returns, it will likely only be for one more season. There is a good chance that none of the existing tight ends on the Bucs return in 2023.

Look for Tampa Bay to draft a tight end in rounds 2-4 and then possibly come back and grab another one with one of its two seventh-round picks.

The Bucs like Colorado State’s Trey McBride, who could be drafted in the second round. Tampa Bay had him in as a Top 30 pre-draft visit, in addition to Washington’s Cade Otton. The Bucs have also shown interest in Virginia’s Jelani Woods, who has had multiple Zoom calls with the team. Otton and Woods will likely be third-rounders.

If the Bucs wanted to grab another tight end in the seventh round after selecting one in the middle rounds, there will be plenty of options. Nebraska’s Austin Allen, Iowa State’s Chase Allen, Pittsburgh’s Lucas Krull and San Jose State’s Derrick Deese, Jr. could be possibilities in the seventh round.

If the Bucs double dip any position it would seem TE early and late is most likely scenario.

It wouldn’t surprise me if the Bucs took McBride in the 1st if some of their guys are off the board.

The Bucs run game suffered without Gronk so drafting two TEs isn’t a bad idea. But I think drafting another WR is probably a higher priority if they have already drafted a TE IMO.

Gronk is looking for one final big pay check and the Bucs shouldn’t be the one. My guess he will come in not in football shape and will have injuries which will be similar to what happen to Richard Sherman; let him go from our radar.

What makes you think Gronk won’t be in shape?

If the Bucs trade out of the 1st round, they could have enough draft capital to get McBride and Woods. McBride should help immediately but Woods can be a excellent blocker and goal line pass option. The other advantage of TEs are they cost a lot less than a WR or OL at contract renewal time. I would also trade away both 7th round picks. You get basically the same value from UDFA and Licht’s history that late is poor. He is actually better at UDFA. I still would love to know why OJ Howard never worked out. Was it… Read more »

The problem with UDFA players is they are free to go to any team, but with those two 7th round picks you own their rights.

Licht is certainly a “double dipper” but I strongly doubt it’ll be a TE. Linebacker seems more likely or maybe even CB but not TE. The Bucs just washed off the OJ experiment because of an offense that doesn’t use them so why Double Dip unless we’re talking 6th & 7th rd guys

I think the double-dipping for TE’s is highly probable.