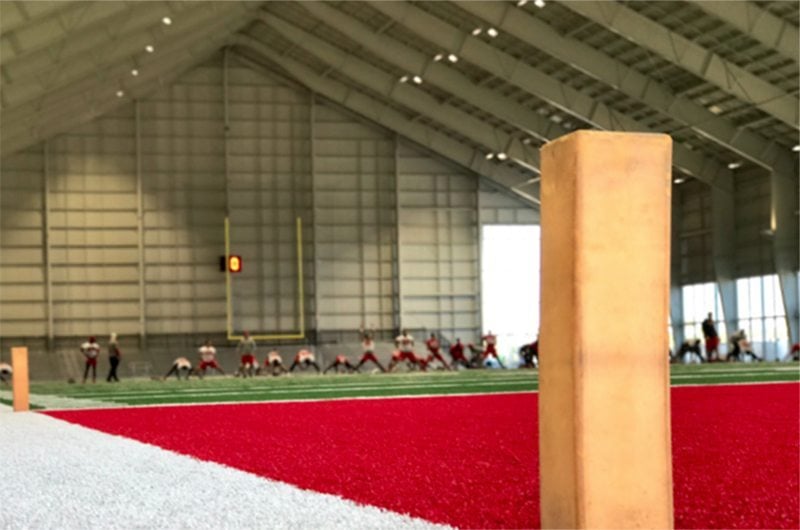 Friday is the big day.

It’s the final day to hear from head coach Dirk Koetter about any last-minute changes the team might be making for their game on Sunday, and it’s also when the injury report gets down to business.

These are the four things we learned from One Buc on Friday.

#Bucs CB Brent Grimes once again not at practice today. Everyone else seems good to go.

Though the weather was great outside, the Bucs took the opportunity to practice in their indoor practice facility this morning to try to better simulate the dome atmosphere they’ll be facing on Sunday in New Orleans.

As for the players participating, Josh Robinson, Kwon Alexander, Adam Humphries, Robert McClain and Jameis Winston were all good to go.

Brent Grimes, however, was not. He was on the sidelines, and will miss Sunday’s game.

#Bucs practicing in their indoor facility today. A few additions since we were last here. Bleachers and floating goal posts are two of them. pic.twitter.com/DgEeS0N4oa

With the media being allowed in the indoor facility today, we got to see some of the new additions they’ve made since the last time we were in there a few weeks ago.

One of the new things they added is bleachers all the way up one sideline and one end zone for the fans to sit in during training camp. The fans are really going to love this place when it’s all finished.

Friday marked the third day in a row that quarterback Jameis Winston was throwing at practice, something that hasn’t happened since before he got hurt in Week 6.

As opposed to going through just “mental reps,” Winston was able to get live reps in all week, and Koetter was pleased with how he looked.

An Interesting Connection Between Koetter and Deshaun Watson

Koetter was asked ab Deshaun Watson. Watson was a ball boy for him & Smith in ATL when DW was in HS. Said it's hard, Watson's a great kid. pic.twitter.com/y7OrI1dnj7

After practice, Koetter was asked a question about rookie sensation and Houston Texans quarterback, Deshaun Watson, tearing his ACL.

The answer he gave surprised even the person asking the question (Jenna Laine).

Koetter told us that back when he and coach Mike Smith were both in Atlanta with the Falcons, Watson was actually a ball boy for them. Watson is from Georgia, and at that time was in high school.

Koetter noted that Watson is a great kid and that it’s hard to see him go down, but also made sure to mention that he has all the faith in the world that he can come back from this injury because of who he knows Watson is.

Glad to see they praticed in facility. Trevor, did they play any indoor fan audio sounds?

We weren’t in there for that, but I believe Koetter said they did.

I do remember hearing Gruden say he wished he had that indoor facility when he coached here. Mark it down we are going to get destroyed by the Saints. No way this defense will stop them in that done. I don’t care how much they practice inside.

Many would agree with you.

I’m to the point that Grimes “being on the sidelines” doesn’t bother me a bit. Actually I’d like to see Baker, Ward and Ayers on the sidelines as well. Time to accept the reality that this team will be lucky to approach .500 this season. Time to see the young guys play. We saw Ryan Smith and VH3 along with Elliot step up last Sunday. Face it, the Bucs are already playing for next season whether they want to admit it or not. As for Jameis? If the Bucs lose on Sunday I’m in favor of shutting him down until… Read more »

Garv; on board with your logic.

Garv I also agree with some logic here.
Especially Baker what a poor decision to sign him.

I personally believe our talent is fine and coaching is to blame. It’s getting to where I’d rather not have Koetter, Smith, Moncken, and Hayes on the sideline.

It’s OK to disagree. But I know this – the people who know best how to do defensive line play – like Hall of Famer and Super Bowl Ring wearer Warren Sapp – emphatically blames the coaching.

And if the defensive line plays poorly due to poor coaching, then forget about the rest of the defense. It all starts in the trenches.

Trev, is it over for Grimes in Tampa? Are they resigned to the fact it’s better getting Smith reps, then a player who won’t be there next year? That should go for Sims, and Quizz too, get Barber game experience. I’m chalking Sunday up as a loss, I think even the Glazers could except that. However, a loss to the McCown lead Jets, with ASJ, should be the final nail in this regimes coffin. Could that be enough to get Koetter fired, your thoughts. Sure would be embarrassing, and not fair to Koetter when Gruden goes in the ring, and… Read more »

Honestly it sets up like last year every game is a playoff game the hype and expectation is done. I kno doom and gloom the saints are better but honestly are they. Outside of a healthy Vikings team and the pats they played car, Miami, chi, gb without Aaron Rodgers and Detroit and they were banged up. I’m sorry we are the most talented team in the division and if we play loose and mistake free we should come out with a win. We have to b a balanced team. It’s very possible. It’s actually a great situation to see… Read more »

If we were to win this week and win impressively I would disagree with Garv. I don’t mean a win by squeaking by say something like 19 to 17. I mean both the defense and offense would have played well. I would want to see some turnovers and at least 2 or 3 sacks. I would want to see some points be contributed by special teams or the defense. The score would need to be something more like 34 to 17 or better. Otherwise I would agree. Jettison this season, as nothing less than 9 and 7 will have much… Read more »

Hell, if the Bucs win big against the saints I’LL disagree with Garv! Do that and there’s a glimmer of hope. And what Buccaneer fans wouldn’t gladly take a glimmer of hope? Honestly, I’ve felt that since halftime in Arizona it wasn’t happening this season. Something is missing in that locker room. Losing to the Patriots at home the next week and followed by two “MUST” wins that turned into embarrassing losses, I just don’t see it anymore.

Agree Garv: The team song should be Wishing and Hoping.
I still believe in Koetter we CAN NOT keep firing Head Coaches. The last 3 drafts have been O heavy time to start rebuilding the D line.

There is still a theoretical chance that the current gang that can’t shoot straight will somehow turn it all around, starting tomorrow.

But not many believe the Bucs will get a W in the dome this year, with the way both the Bucs and the Saints have been playing. And if they come dragging their asses back to Tampa with another L, then what?

All hope is not (yet) lost, but all expectation is long lost. When a season starts with high expectations, and then by Week 9 you’re down to just hope, it’s a bad result.

This is most likely the game that will tell the story for this season.

Should the Bucs end up picking in the top 12 then we should definitely go defensive line.

Gerald McCoy is 29 and nearer the end than the beginning of his career. While he has proven to be a Hall-of-Famer his body has to have taken a ferocious beating over the years. He has, like some other greats, had the unfortunate fate to have a career without other outstanding help by his side for the most part.

Meanwhile back to today’s game.

We have no shot today. They’ve won 5 straight. We’ve lost 4 straight. There is no way this team is going to beat them in their place to stop a 5 game winning streak. Don’t be surprised if we don’t win another game this year. That’s what is shaping up. The Jets looked like an easy game now it looks like the sixth straight loss. Today’s game is over. We already lost