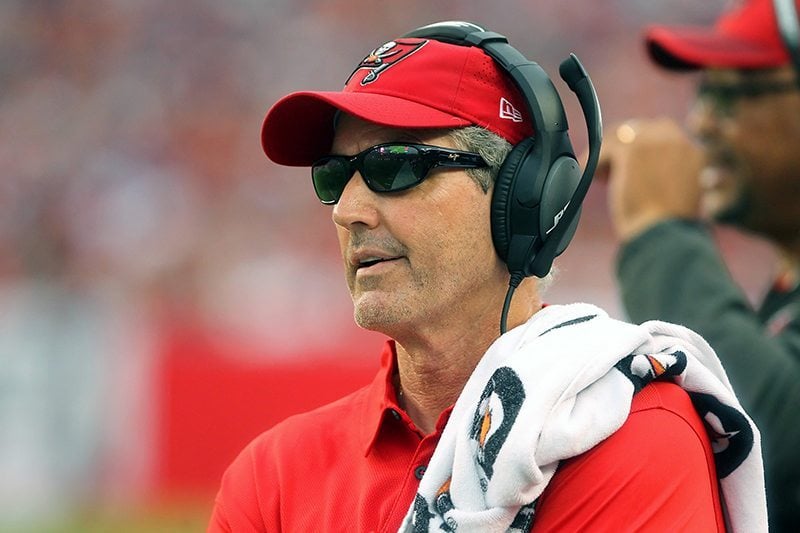 Wednesday was no shortage of important news when it came to the Tampa Bay Buccaneers and their short-term, as well as long-term, future. The media was given a surprise press conference with quarterback Jameis Winston, and we quickly learned why his press conference was moved up a day (he’s usually on Thursday).

These were the four things we learned from One Buc on Wednesday.

Right before Winston’s press conference, the media had learned that Winston saw orthopedic surgeon Dr. James Andrews in Pensacola earlier this week. So, the first question for Winston during his availability was about the visit.

Winston confirmed to the media that he did, in fact, visits Dr. Andrews’ office yesterday to discuss what might need to be done about his shoulder. Right now there is no kind of surgery scheduled, however, Winston visiting raises some concern about how serious things may be.

For now, he’ll just give it rest.

#Bucs CB Brent Grimes is back at practice today.

In addition to Winston being sidelined, the Bucs’ starting offensive tackles Demar Dotson and Donovan Smith were both wearing bucket hats and not a Buccaneer helmet at practice on Wednesday. It was expected that Smith would be missing or limited for at least the start of the week after his knee injury took him out of the second half of the Saints game, but we’ll have to see if he can go at all this week before the Jets game.

In some good news, starting cornerback Brent Grimes was back at practice today. He wasn’t able to practice at all last week due to a shoulder injury, and was held out of the Saints game. It’s good to have him out there so early in the week.

#Bucs announce that they've promoted WR Freddie Martino from the practice squad in place of the suspended Mike Evans.

On Monday we learned that Bucs wide receiver Mike Evans was going to be suspended by the league for his altercation with Saints cornerback Marshon Lattimore this weekend. After his appeal was eventually denied, the Bucs decided to bring wide receiver Freddie Martino up from the practice squad to take Evans’ spot this week.

Though Martino will take Evans’ spot on the active roster, it will likely be rookie wide receiver Chris Godwin who takes Evans’ place on the field.

Koetter Chimes In On Winston’s Shoulder

Koetter: Dr. James Andrews has been involved in this since Winston got hurt in Week 6 pic.twitter.com/WMC9c6671a

Head coach Dirk Koetter chimed in on the update with Winston’s shoulder and told the media that this meeting with Dr. James Andrews wasn’t due to anything new and that Winston has been talking to and in contact with the surgeon since the injury happened – this was just the first time he’s gone to see him in person.

Even if Winston doesn’t get surgery, we still think there’s a chance he doesn’t play the rest of the season. The next few game results of the team could tell that tale.

So your franchise Q.B. has been seeing a renowned surgeon since he first got hurt, and no one thought it wise to sit him before more damage was done, which seems to be the case? I can only guess Koetter, and Licht thought saving their jobs was more important then risking further injury to Jameis. The season is over!! Frickin put him on I.R. already. They’ve taken more precaution with their 3rd string Q.B. Griffin then Jameis! WTF!!

A grade 1 AC sprain would never require surgery. They way I’m reading this is they lied to the press and fans about the severity. I guess that’s their prerogative but letting him play with a grade 2 or worse was just dumb. If they knew day one that he had a moderate tear in the AC or surrounding muscle he’s should of had surgery that week. Those things can take forever to heal naturally, I still felt discomfort for years with the grade 2 suffered in high school. I had a grade 1 about year earlier and was fine… Read more »

I think they initially were telling the truth about the grade 1 sprain. Where I think they started lying was after the Bills game. That blindside strip sack further damaged his shoulder and, while he could play with it, the injury was clearly worse as evident of the last 2 weeks. He should have sat after that Bills game and or definitely after the Panthers debacle. Clown show.

This is a good chance for Godwin to show how good he is.On the other hand we maybe missing 2 O linemen and the Jets can rush the passer. I guess we will see!
If we lose just start playing the young guy’s and get a top 5 draft pick.

These guys are the Keystone cops. Koetter and McAdoo got their jobs for the same reason. Continuity with offense. Both are failing miserably. They did nothing to earn a head coaching job. This is a mess that keeps getting worse. I would not play Winston another down this year under this regime. They need a new start. Now Koetter and Licht are desperate and who knows what will motivate their decisions.

A reply – it is flippin’ to be a buccaneer fan